Artist Sarah Grant is showing two new large-scale works: “Hammer, Nails, Nuts and Bolts Revolt” and “All Saints Day 2016,” which are gifts of hues, hewn with shape. But each canvas also offers a story of world, inclusive of questioning and loss and seeking, which she orders and fashions into a beautiful mix of tale and telling.

Another beautiful mix can be found in the six mixed-media works of Jonathan Pearson: “Theta Scapes #2-#7.” Filled with fantastic creatures in pink, greens, and yellows, these painted scenes conjure short narratives which take place amidst strange geographies. The six mixed-media works by Wendell Arneson, in contrast and complement, offer darker and more natural colors, the browns, blacks and ochers cover and spill out from the words incorporated into these works, as well as the graphing, lining, dotting or punching, which intimate plotting, writing, Morse messaging, and steno —all modes of communication. Pathways and trajectorial elements create multiple focal points, giving strength to these communicative compositions.

The mesmerizing “Dancing Landscapes,” digital photographs displayed on a 4K monitor, by Doug and Eileen Leunig, grants the alluring visual effect of speeding past forested areas—the blurring of leaves, branches, color, sky and light—but, paradoxically, with the speed slowed down in the extreme. The images here transition into each other at a pace that allows for all the compositional areas to become—one tree into another into a shoreline into streaks of blue light so bright it seems as if the blue…is indigo…is violet… and the visible sky has dropped to become part of the land, thus melding elements—solid, liquids, gases.

Referring to gases, the Leunig’s “Portraits of Steam” is also on view: a haunting spectral video of abstract plumes and dotting, forming remnants reminiscent of drapery, bone, flame, and smoke.

Julia Katz paints with oil on panel, and her abstract landscapes with figures, “Ventures” and “Earth Cloud – Traverse,” each present three small figures in a distance—the optics, coupled with the clouds of paint, confound the eye in the best way. Each figure moves toward the viewer, both out of the clouds of paint and then again into them. The wide use of oranges becomes like skin tones, but Katz also clearly composes the semblance of ground and sky, though no horizon line can be found. Somewhere between this below and above, however, the clearing for the figures opens to give the viewer a held moment of voyeurism and/or witnessing. 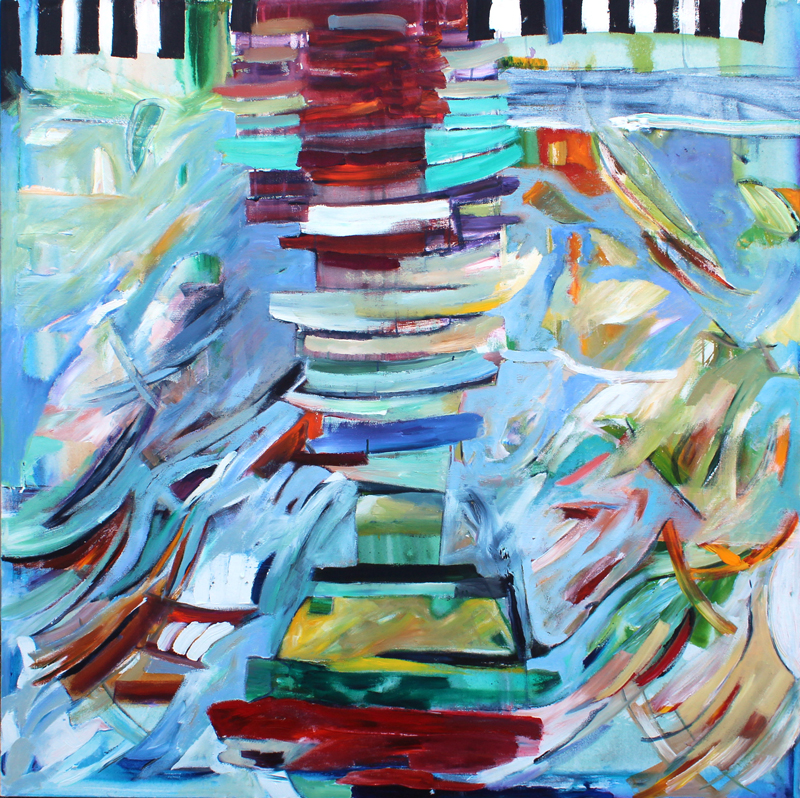 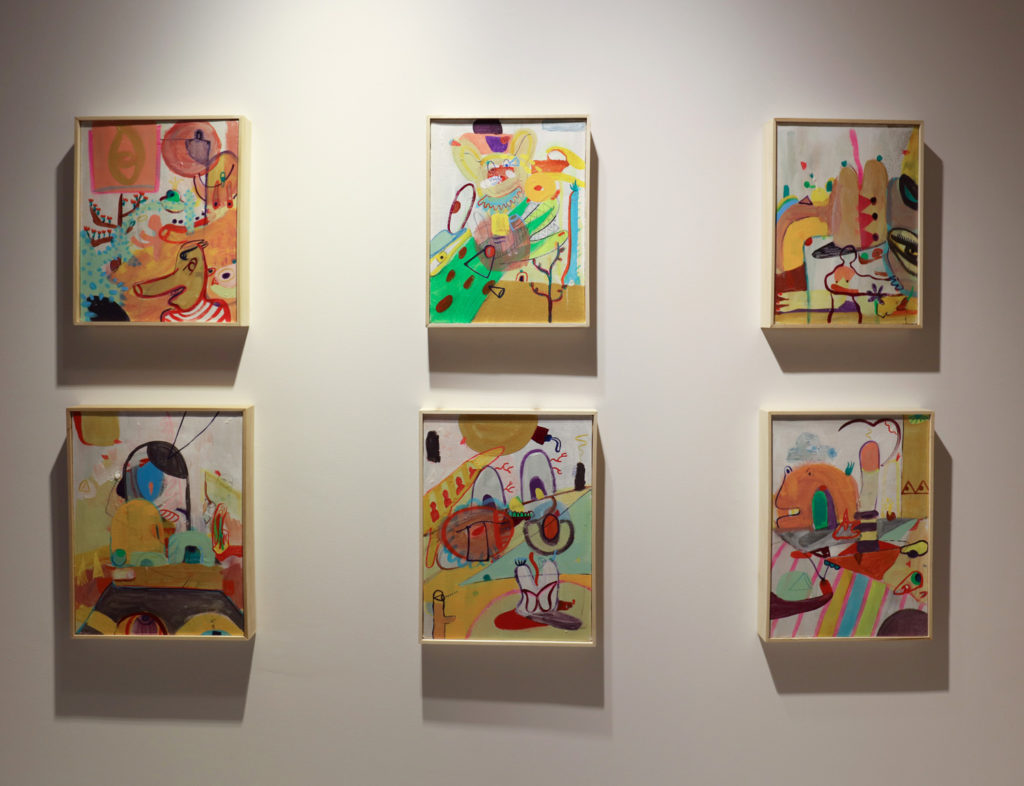 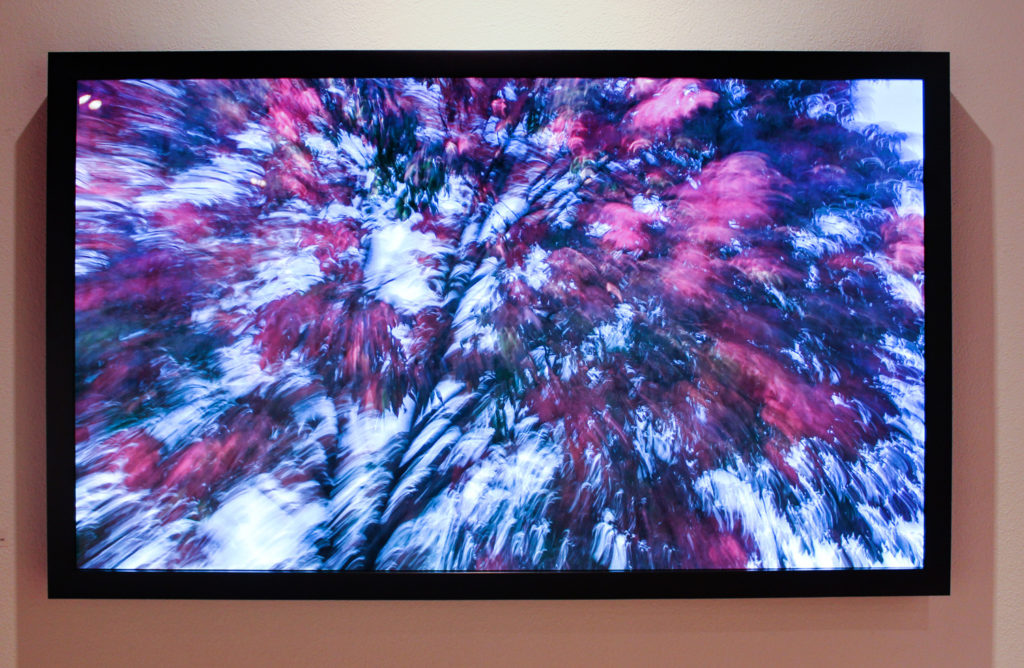 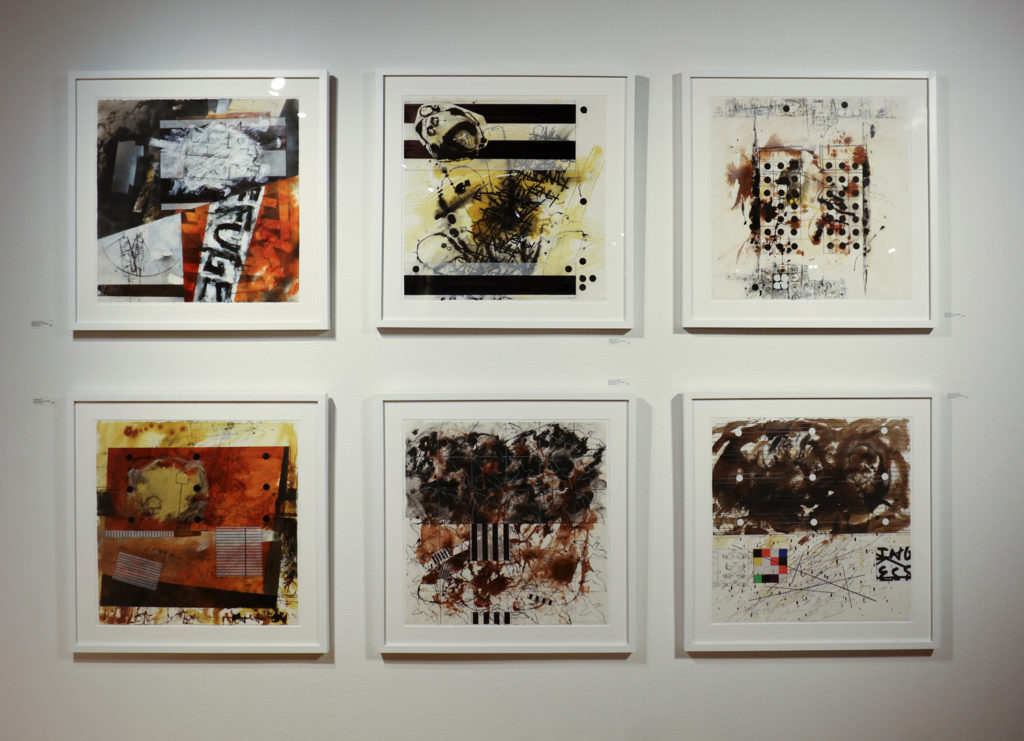 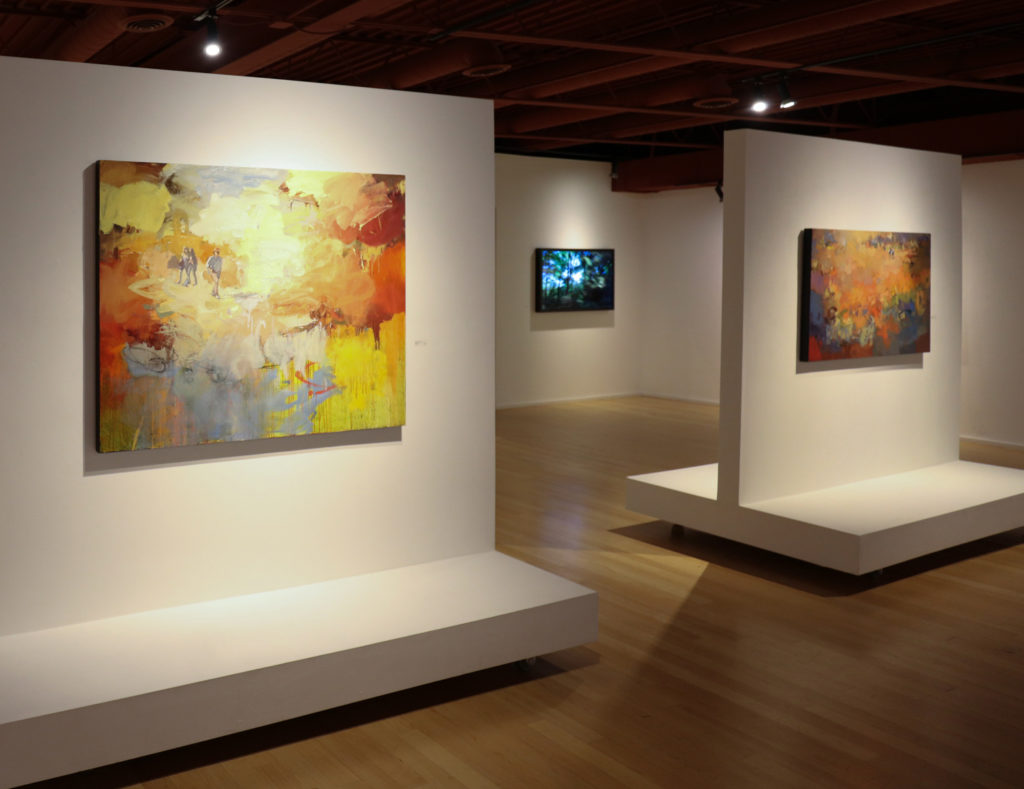 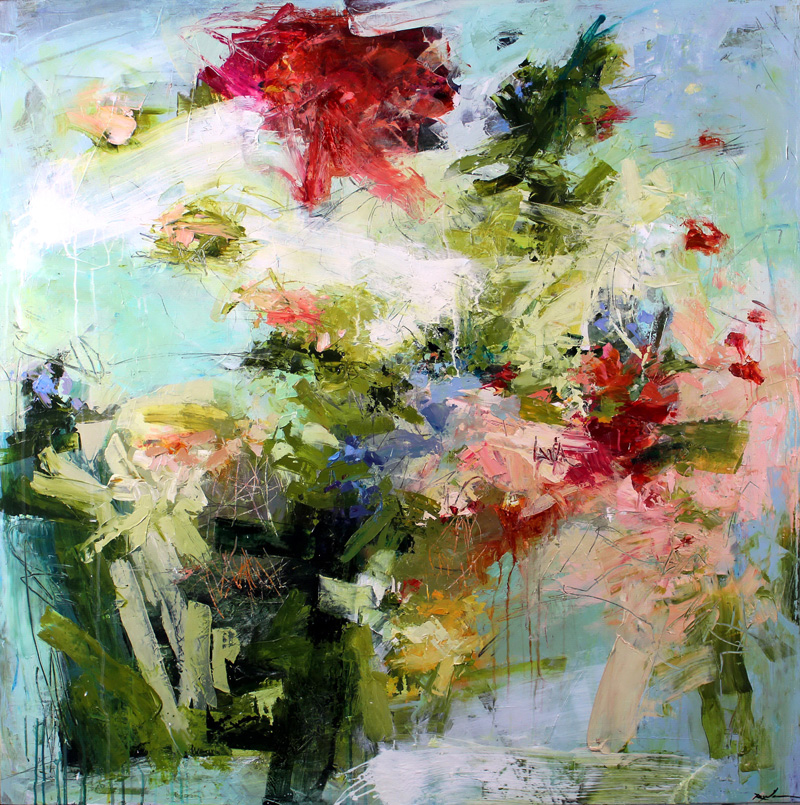 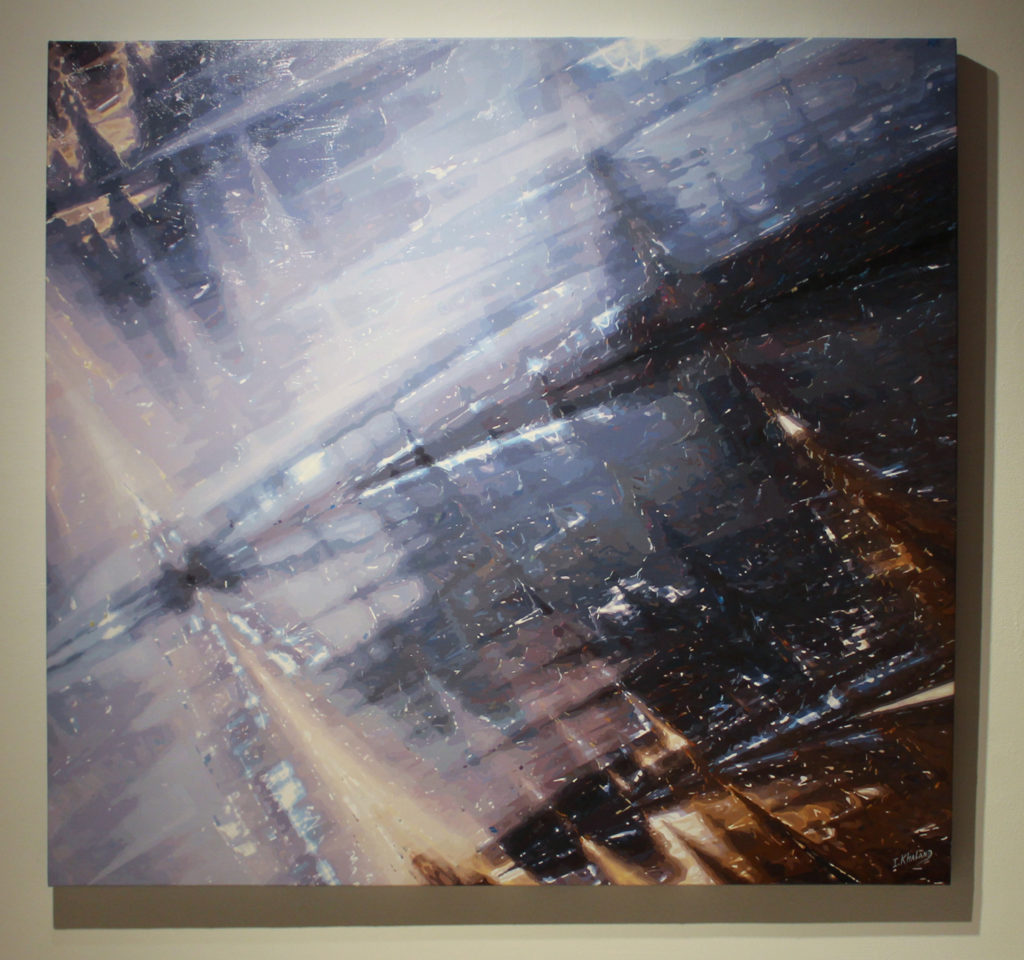 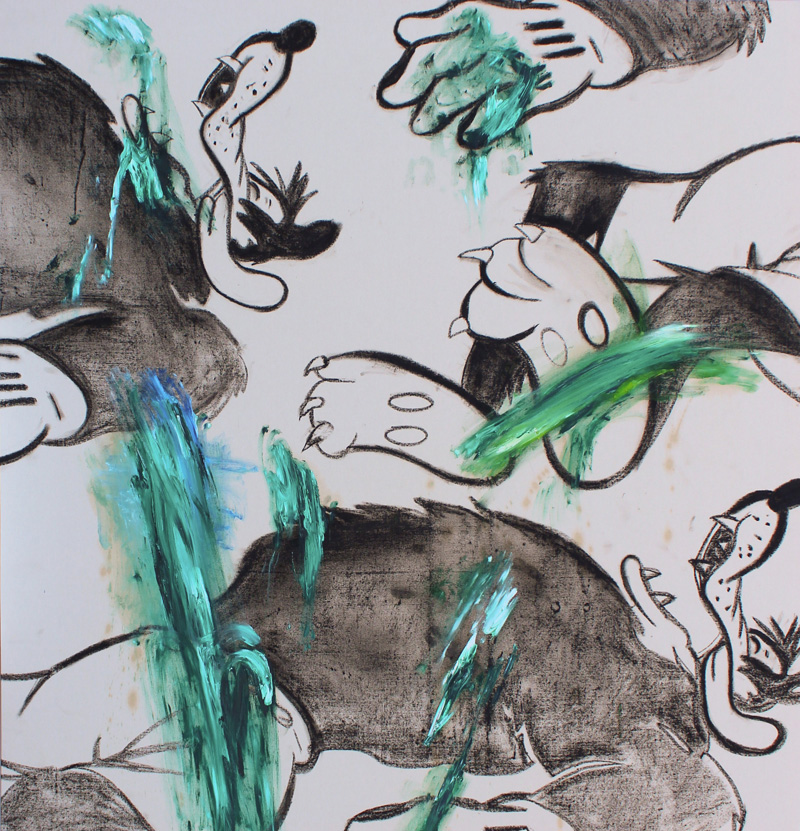 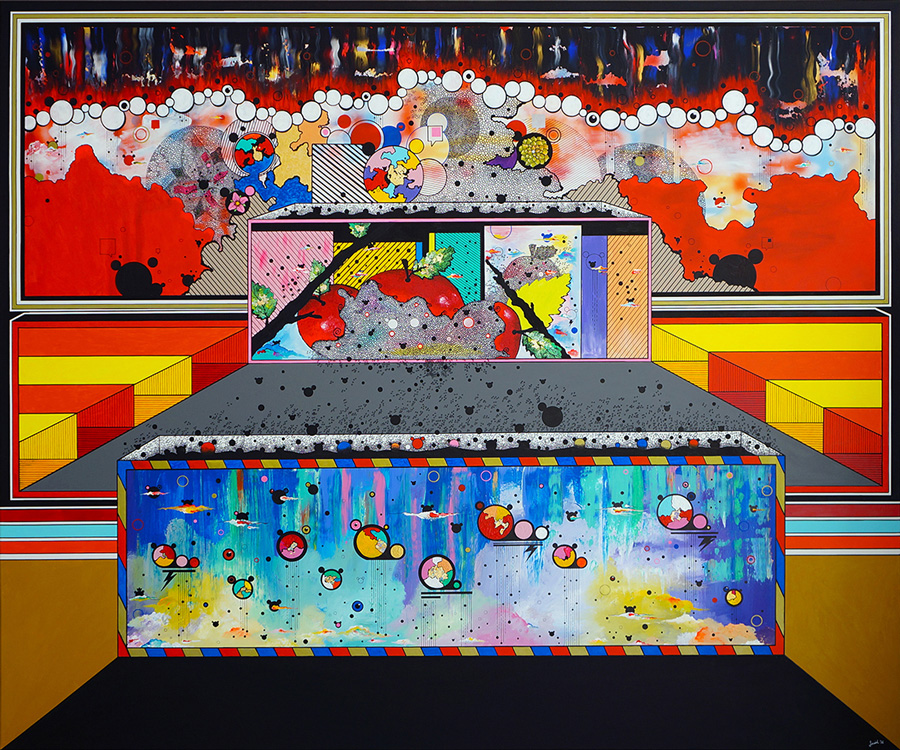 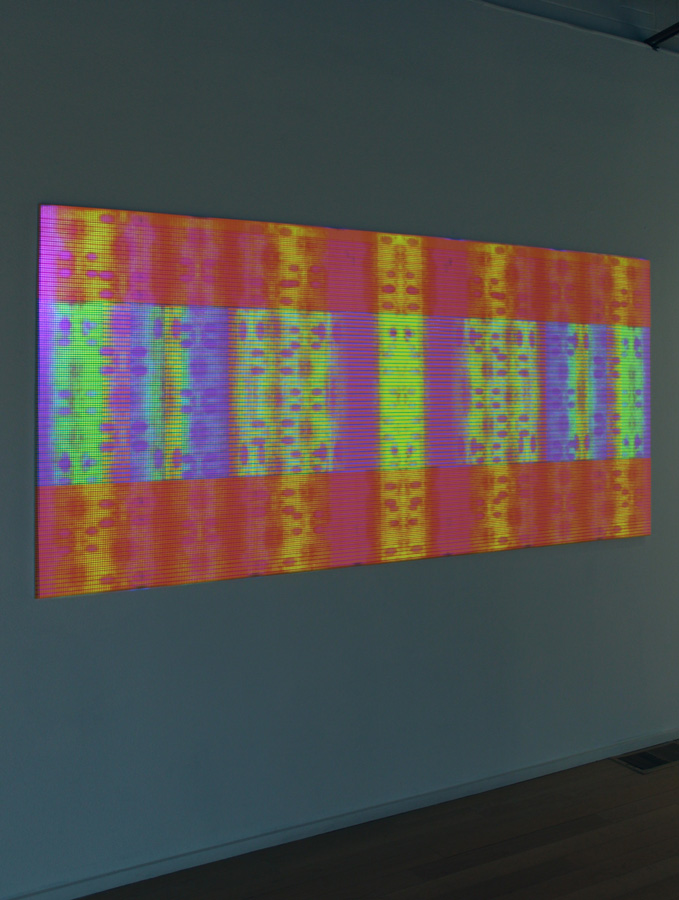 Conn Ryder’s work, “Pistil Whipped 11” and “Pistil Whipped 12” are studies in visual onomatopoeia, if one were to meld the English and original Greek meanings: to mimic [sound] and to make names. Ryder’s palette-knife marks create action on the canvas—the resulting delirious clusters become the fine art equivalent of “seeing stars,” which usually comes from an injury to the head, but in Ryder’s case seems to come from an indwelling of the heart, and is the effect of something certain and ineluctably feminine, be it flower or woman.

It appears one may be seeing stars in the sky in Igor Khalandovskiy’s mysterious and stunning “Night River.” But upon closer gazing, this acrylic painting on a digital print also appears as a brilliant nightscape, angled, replete with moonlight and its reflective effects on the ground. This work captures deep space, be it earthly spatiality or outer space. Khalandovskiy paints luminance that doesn’t guide as much as it transports.

On exhibit are two oil paintings by Jordan Weber: “Perennial Philosophy” and “Ecocided.” These continue to follow the thread of theory and activism found in his oeuvre. Here, the renderings of The Big Bad Wolf are painted simply in black and white, while Weber’s green and blue paint slashes present like toxic geysers attacking the animal. These frights of color break up the fallacy and fallibility of black and white, but also attempt a refutational swallowing of the canvases hegemonic white, while warning of environmental—bio and anthro—pollutants.

Senid Tabakovic’s two works remain large frames filled of color and line, strata and spheres. “A Series of Negative Reactions” has at its core, or center, three apples (a specific reference to the generic “apple” of the bible, perhaps), from which the titular reactions may start. Tabakovic’s perspectival lines combined with the molecular bonding nature of his spheres—combining, detaching, recombining—create a world of 0s and 1s, which in their boxes meet with the bleeding of darker colors and streaking paint—countering the distinctly defined circles. His continental shapes are here, still, moving ever closer to the black at the upper edge of the (our?) frame. “Freeway 1 & 2” is a work of multi-dimensions and levels in greens, blues, and black, which feels as if one is pulled in—to walk or crawl into the painting, down the planar surface, to the exterior of a box (yet to be opened), or into another world, having come from a box of sorts already. This painting is a query into how we see, and that a way out is also a way in, and vice versa. 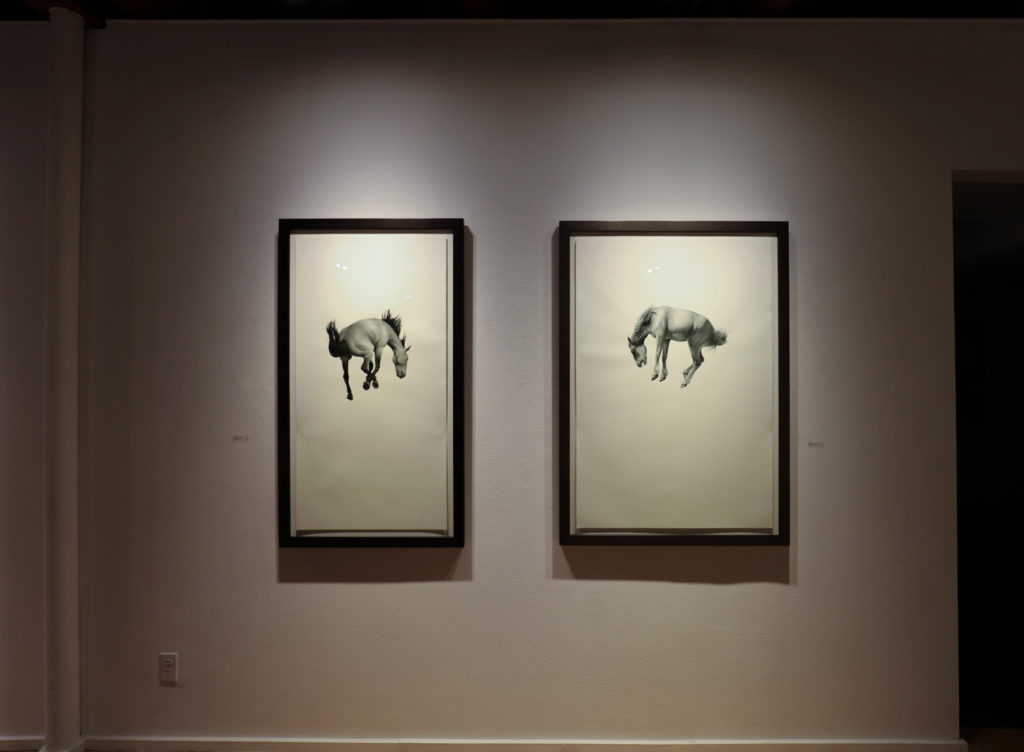 Larassa Kabel’s drawings of falling equines in “Alamo” and “Cisco Kid” remind us—after her on-point curation of the exhibit, UpSpeak, at Moberg earlier this year, which included her collaborative series with Ben Foster, “Security Blanket”—how quietly gorgeous her pencil works are, and how the precision she employs is integral to her technical elegance.

If you like Mathew Kluber’s black and white video projection, “So Much Water So Close to Home,” which plays against Moberg’s neighboring building on Ingersoll Ave., then don’t miss his video work inside the gallery: “Friday I’m in Love.” With its colored patterning, and subtle shifting, this work immediately engages. Standing in front of this, one might just wonder: why not do what Robert Smith said in the song Kluber’s title references: “always take a big bite / it’s such a gorgeous sight.”

As this season asks us to reassess how we seize, and how we see ourselves, and others, in the world, we at Moberg Gallery make a new year’s resolution to do the same. We resolve to continue offering both our local and global communities great art—sculpture, video, painting, prints, and more—created by artists who are masters in their respective media, and to curate exhibits which enhance each work’s individual, as well as relational resonances.