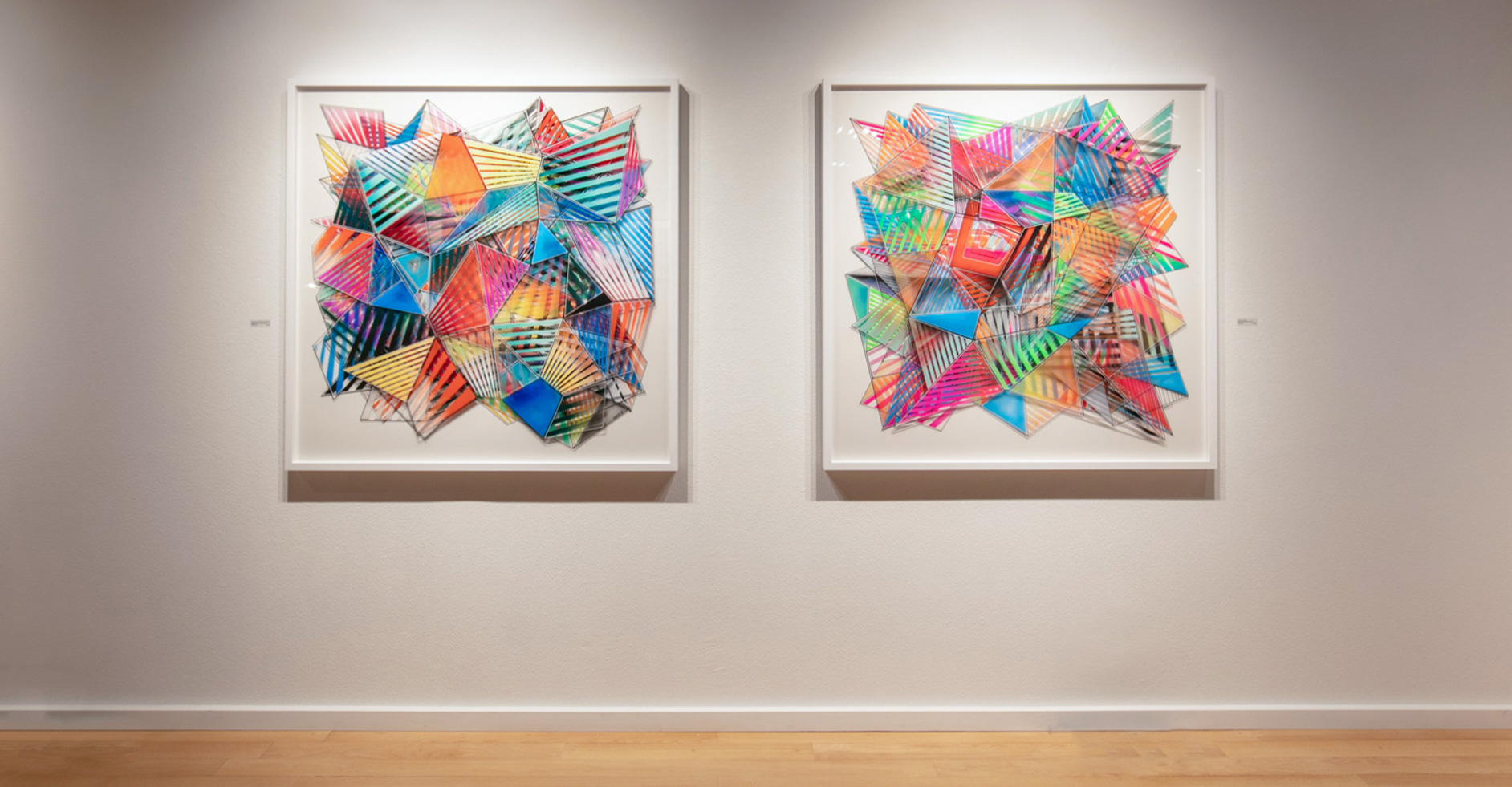 Growing up in the ’80s was not just about trickle-down theory and no-nuance-neon, the pinnacle of pop music, an explosion of what was once known as “sidewalk surfing,” or a certain design credo that rode in on the higher coattails of Memphis Design and newly accessible computer graphics—simple lines and basic squiggles, but it was rife with all those things. Punk had given birth to grunge, and disco to a whole brood of synthesized sounds. It was the time of the enormous art market boom, which of course handed the next decade its consequent crash. Of the last century, the ’80s might have been the decade that felt like it came too early, all the while feeling totally, unfashionably late. Chris Vance is a child of this era, from which he culls personal and cultural memories, using his practice as a way to remain continuously and acutely connected to a specific past and present. His large-scale works are dynamic reminders of the dynamism of history and contemporary life itself.

Vance’s “Dragon Lair” could be considered the generative and culminative work of the show—many smaller panels put together to comprise a larger piece that sits on the edge of two- and three-dimensionality. Displayed by away from the wall slightly, in its segments, it does what the images in and across frames indicate—it moves … toward the viewer, away from the surface, though still surface itself. The text-like elements evoke graffiti, the galactic boxes and pyramids float as if deconstructed obelisks, unfolded objects turned linear—angular, contour.

Archival paper is the perfect medium for Vance’s new fragile yet sturdy pieces. “Out On the Open Road” is a stunning example; Here, Vance’s known expressive inclination to curvature and form flattens into multiple horizon lines, stacked and crossed, rendezvousing at the center of the lower and upper halves of the picture plane. The organized layering and compositional directive give us a plan view that bifurcates groundways and skyways, while turning the viewers head left to right, as well, in a gesture that feels like looking for traffic before a crossing.

“Free Falling” (mixed media on panel) takes this approach even further—adding colors and strata—an extended multi-planar event. In this work, lines meet centrally again, but now create stairstep-like fanning— segments here are more proliferate, thereby also creating a three-dimensionality that Vance’s work can’t help but play with. The blues turn from sky to indigo to navy as one’s eye slowly and softly lands at the grassy foot of the panel.

“Teals of Fury” mixes the looping that Vance has mastered with his contrasting type of mark making– stretching of translucent bands, eliciting the effect of rigidity attempting to wrap the flexible. In “Doorways,” mixed-media on panel—the stretching of seemingly rigid parts in translucent white comingle with the vibrant curling ribbons. But in this, there is penetration of shapes, intimating a literal inter-course that the lines have been taken to and on. Sharp points intend throughways, centers open, allowing passage and offering glimpses of background. The definition of “door” gets confounded by shape and solidity, portal and ideation.

The color palette of “Personal Practice” is a little darker than the other works in the exhibit—red, white, and blues, with black and gray. This is an orbiting explosion that feels architectural and cosmical—filled with what seem to be windows without walls, walls without foundation, foundation without tethers. And all shapes that appear organic are outliers from the lineal clusters.

Vance’s two layered acrylic paintings, “It Was All a Dream” and “It’s Like This & Like That & Like This & Uh” are reminiscent of pristine, cool, and perfectly stacked Shrinky Dinks. The pyramidal and prismatic effects in the latter work—whose titular reference to “Nuthin’ But a ‘G’ Thang” by Dr. Dre and Snoop Dogg brings us into early 1990s’ memory—makes for more consistent visual trajectories. In “It Was All a Dream,” however, there is less black, more transparency, and many-degreed stacking, which gloriously renders any discernment of triangles and delineation more challenging, and purposely so.

Don’t miss the ultraviolet room that takes us back to the ’70s, and then moves us slowly forward again. The black lights in this small gallery room, where five works in fluorescent colors are displayed, create ambient space–it is dayglo all over again. Spend time here, really look, close your eyes, and look again. Vance has somehow created works that act as advanced phosphenes (light images one sees in the black of shuttered eyelids), and they are warm and welcoming in popsicle colors. The beauty of Vance’s larger body of work is that each piece is singular, but connects, like ourselves, to a larger spatial and temporal history; the cord (or in Vance’s case, often the (musical) chord) is there.

Andrew Clarridge’s digital work on aluminum, “Glitch,” is controlled wild, a work contained by the edge of the frame only—with the locus at the composition’s center visually generating the miniscule movements felt across the surface—undulating, expanding, clouding, flowering, dissipating, tapering, flagging. These waves feel like a simulation, but of something unknown—a mysterious pixelated and gradated, resolute data map, a virus that is an antidote, seen by the naked eye in brilliant colors held by a deep black force.

TJ Moberg’s “Lost Keys” is perfect company for Vance’s new work. Moberg’s dried latex collage/painting is a color-homage to the ’80s and’90s’ yellow and gray and is an analog song to our life of keyboards, which led us to really start main-lining online. The title, a play on those too-oft misplaced or “lost” objects—our keys—becomes commentary on the virtual land of the lost (the users), obsolescence of hardware, as well as the territory where both land and cloud storage is full, and we must pick and choose what items to dump.

Robert Schulte, Jr.’s visual haiku, acrylic on vinyl (pressed albums that now play differently), are part pop, part minimal, and each is a cultural portrait, pared down vexillographically (designing of flags) to impart a semiotic punch to the viewer. And Dennis Wojtkiewicz’s oil painting, “Citrus Series #21,” is a detail of fruit, seeds and all, which appears backlit—a color x-ray that gets to the pulp of the matter, each contiguous kernel seemingly illuminated.

Artist Pref’s “You” and “Me” are quite the green and blue couple. A block and a mobius-like pronoun meet; straightforward Me and elliptical You. This relationship of two one-syllable words, in some sense, comprise the whole of what any story, work of art, dialogue, discussion, or song, is about: the self in relation to other/s. Straight or curved, linear or non-linear, arced or mounted, single-channel or multi-media—art, as everything, is about you and me.

For additional information and to purchase works email info@moberggallery.com