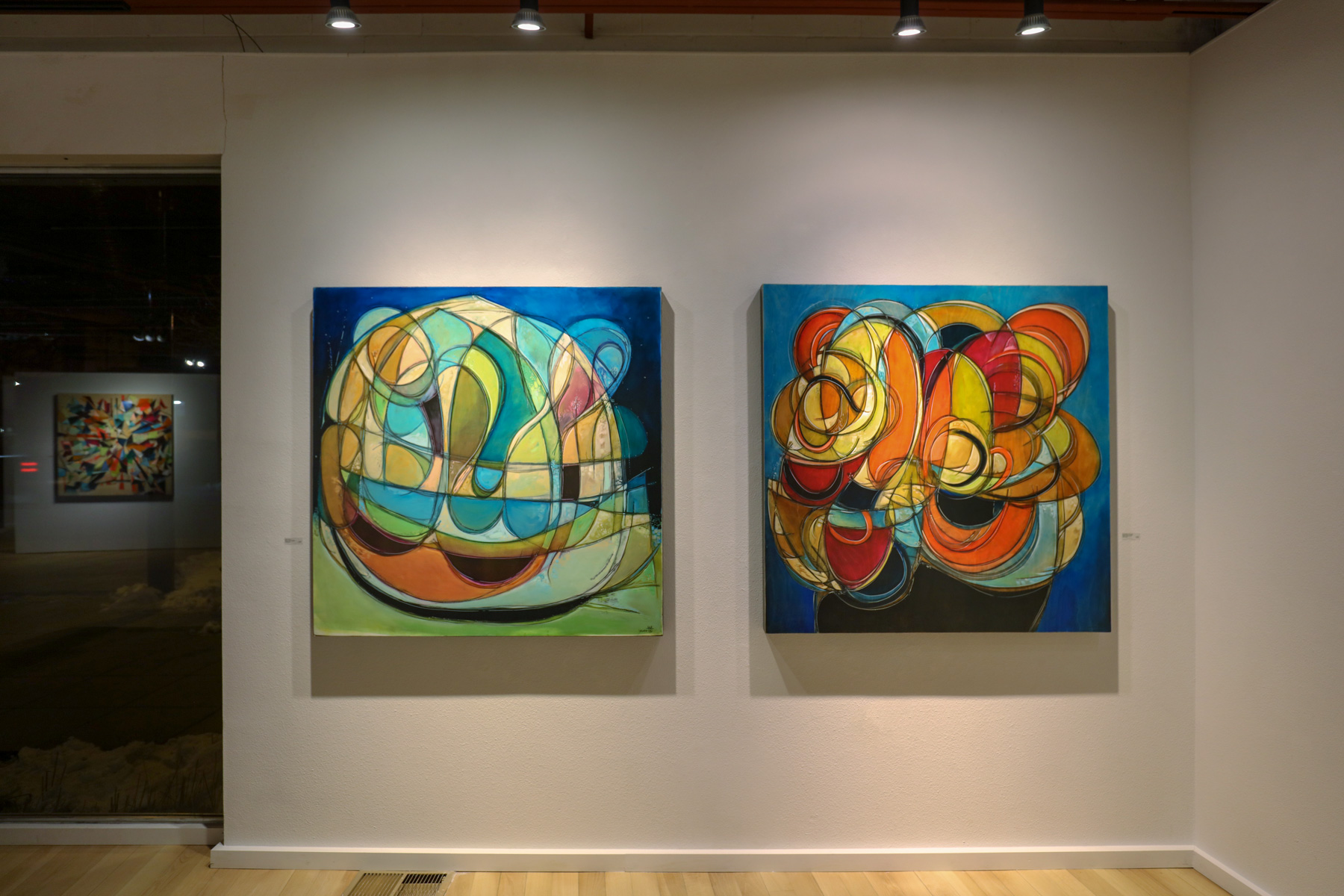 Chris Vance | Not Quite an Architect

Not Quite an Architect revels in lines: linear angles and linear curves. In fact, it’s an exhibit of lineal detonation. Vance’s artwork is dimensionally resplendent. Drafting sheaves of marks and color, he builds a very particular world. Two of his large mixed-media works, “Abandoned Drive Ins” and “Night Train,” employ perspective that takes in, goes around and over the lines, while “Tagging Short” and “Twisted” relish in the inclination to curvaceousness, looping and threading. “Told I Was A Poser,” a layered paper work, is even fuller than Vance’s usual compositional abundance, pushing the boundaries of its edges. Though he is known for working with substantial swaths of color: twirling, mixing, making way for deep backgrounds and mated colors, here are cut lines at Vance’s thinnest—a new kind of serpentine mélange. In “The Scapes,” Vance takes on landscape painting—ground seems to pull away from itself, creating a spaceship of the land, and even the clouds look like Buckminster Fuller-esque balloons. “Inner Horizon” continues in this vein, and as its title implies, turns the horizon inside out, appearing to visually internalize what we imagine as external, and Very. Far. Away.

Vance’s familiar creatures make a spectacular appearance in “Space Invaders” and “Hosoi to Cruz,” the latter presumably a wild- bunch ode to the famous skateboard brands. This is his Alley Oop, jam packed with eyes and mouths, waves of water turned flames, the hierarchy of topsy-turvy hues, teeth and nails, tail as kinked rail. To continue this theme, the new Skateboards, mixed-media on this impressive, though wheel-less, substrate, take over a wall. They will make you want to surf the Iowa land with more than just one, much like his earlier smaller works did, their modularity was so compelling, the eye always wants one more. Each skateboard is utterly unique, containing its own brief narrative. But as a series, Vance has created a community of outcasts—a squadron of character-driven stories. “Mr. Lee to Earl,” “Say What,” and “Day off,” all riff on and embrace the skateboarding sub/culture.

“Open up with the Cut” continues Vance’s perfect curves, but in oh-so-light pastels, black and white. It’s quiet, though its movement is as sure as any of his more vocal pieces. In “Not Quite, But Future,” Vance plays with the notion of temporal tension in a grammar that references and also sets the tone for how we experience realities. Here, geometric shapes conjure what appear to be boxes or houses—solid referents. A containment within the uncontained—this is what space is. And this is the galaxy Vance reigns.

“The Opening to the Book” is a masterful paper piece of a triangular march—a protest if you will—creating peaks and portals through which one imagines change can be made if not found. Like a preface to a tome, this work has much going on but feels simple, right; what a bottom line is supposed to do: hold up all the un/rest.

Robert Schulte, Jr.’s photomontages, “Abiquiu Lightbulb” and “Arabian Knights,” is bricolage with engineering precision. Where one “backdrop” meets the cutlass blade of another image, a new relationship breeds a different tale. Objects such as spiral binding and zippers intimate boundary—of opening and closing—of keeping together, but a/part. His acrylic works on vinyl records are wonderful Pop discs that evoke a reverie for the bygone object (which is having a millennial resurgence) and an attraction to the renewable plastic and palimpsestic nature of art. The covered songs here etch new grooves into our seeing, and Schulte’s use of vivid contrasting colors is a surefire sign that he actually wants nothing to fade into the background; that his work grabs for the fore, and the future, and succeeds.

The copper plate etchings with aquatint of Jeffrey Thompson show his great subjective range in three moves: animated adventure, humor, and vanitas. “Buzz,” “Gashouse,” and “Untitled” are all tonally pitch-perfect, and Thompson is a minimalist when it comes to scenarizing, though the implied action or inaction is always somehow caught in every grain.

Andrew Clarridge’s triptych “Bittersweet Dreamstate” is an attracting and futuristic land, water and/or spacescape. The dotted forms and geodesic objects float across their panels, seemingly pulling toward each other as reminders of order and chaos, and how those differences often reside in perspective. Coral pinks and algae greens coexist as ambient landing pads for the tetrahedron modules in denim blues.

And while some things tend toward landing, others gravitate toward escape, or letting loose. Conn Ryder explodes acrylics delightfully and discerningly in “Stray the Course,” “Out of Whack I and II,” and “Pants on Fire.”. Her tongue-in-cheek titles are added proof she understands the way paint moves—and moves a viewer. Often, abstract expressions leave the viewer with sober take-aways, not knowing an artist’s intention by her subject matter. Storytelling in abstract works operates differently, more ambiguously, but Ryder knifes the canvas with bold color without cutting it, in the process imbuing the surface with the fevered emotion she articulates.

And don’t miss the two walls where Tibi Chelcea’s prolific series “Trigonopoetry”—composed of 69 small mixed-media works with minute textual elements—hangs. These elaborate and stunning erasure poems take the rigid Western ticker of text—top to bottom, left to right—and create space for the short words, creating compact lineal images on old trigonometry textbook pages, which do and do not take into account mathematics. But the poetry is not simply in the small lyric poems; it is also found in the visuals of covering up of all that can’t or shouldn’t be said with words. These math art works are extremely varied— one is reminiscent of a 70s textile wall hanging; another, of the constellations at night; and yet another, as a grid with dots, somehow conjuring the 80s, telling us in little letters: “Now, if we move the … point one place … to the left / we can say that / This / …is / … …Art.”