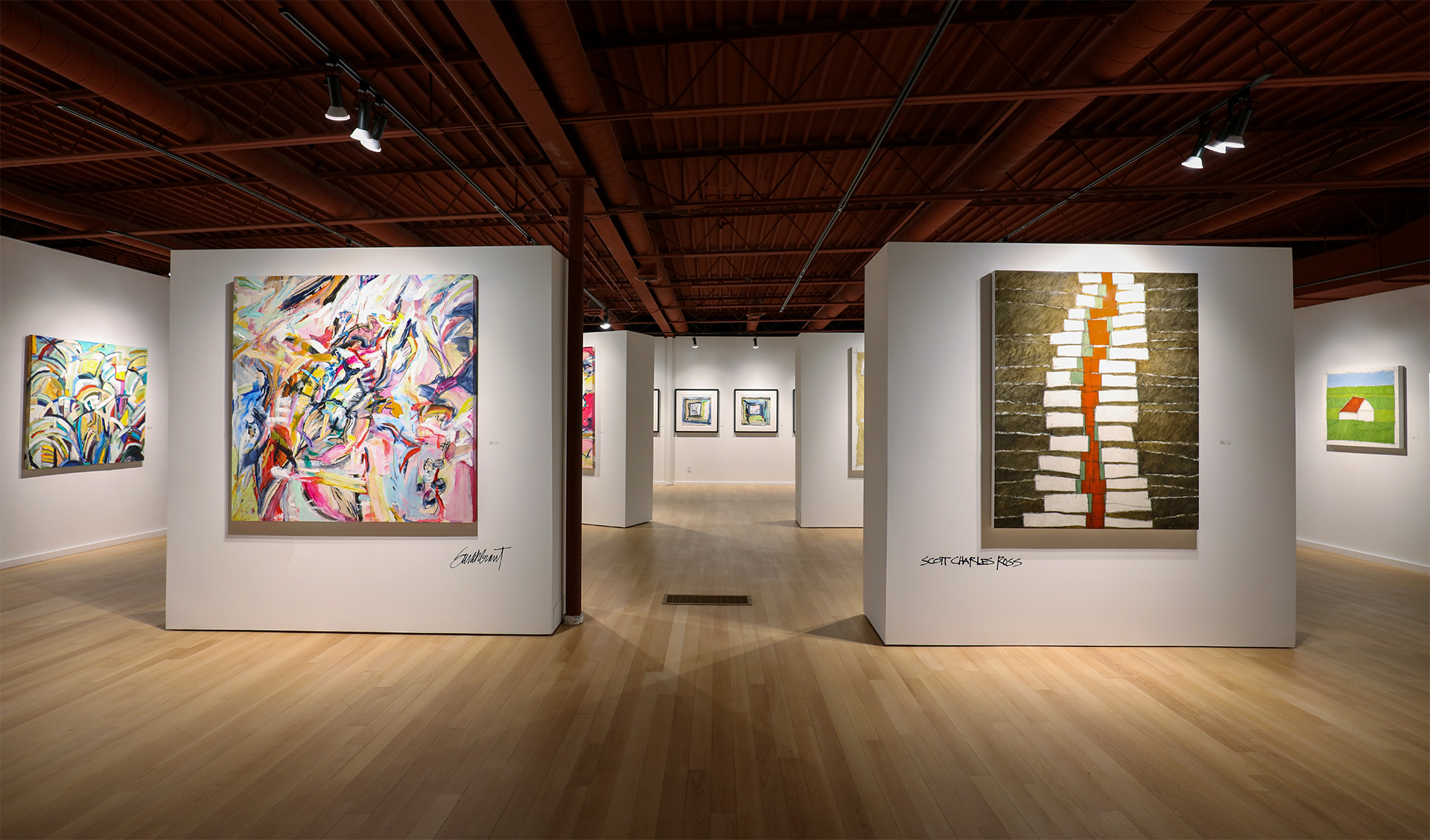 This duo of abstract/landscape artist/storytellers of time and place are aficionados of momentary line/s, which make of themselves closed spaces that open up (to) their viewers. Grant’s and Ross’ understanding of surface, and their willingness to make it more, is in part what imbues these large works with a suddenness—respectively active and still. Grant’s feel intentionally wild; Ross’ calming, even with the precipices, primed with a vertiginous allowance for our biped standing.

Talking with Grant about painting and the experience of her new larger works on panel, I am reminded of a recent interview with the artist Julie Mehretu and Ted Loos in the Wall Street Journal Magazine, where Mehretu says, “A painting can transform you. You can actually have a physical experience, in your belly.” Grant both feels this during her process, as well as produces the possibility of that very experience for her viewers. She talks about her summer up at Okoboji. But she talks of it in terms of the unsolved mysteries to which she returned at her Des Moines home—imagining backstories to remnants she found outside. An osprey and a mountain lion tussled in the city? This is just one of the stories Grant tries to piece together. And it leads her to realize something she’s been addressing her entire art career—Man v Nature.

To that end, she takes us through the following places, ideas, and objects, in: “Gardens #1,” “Causation When Correlation Will Do,” and “In the Vase.” These are the magnificent creations from Grant’s new endeavor of painting on large wood panels. This was both frightening and exhilarating for her. “Gardens #1” is a fantasia of color and strokes, with a centralized concentration, where Grant uses the mighty line, in black, to create a rib-cage-like core for the composition. This piece is a delectation for the eyes—wandering in all directions, but never aimlessly. The corners of the frame become nuanced puzzle pieces. These are pieces not only to be put together, but also to be understood as parts. Because the visual connectivity happens first front and center, before the eye travels to source complements.

Grant’s paper works, “Constituted by Nature,” “Sack in the Pulpit and Feathers,” “Cancelling the Effect of a Sharp Note,” and “Contiguous Boarders” are more still life than abstract expression, more straight narrative than ambiguous poem. The latter work may have somewhat clearer sections, the conceptual girding, more visual and visceral with Grant’s titles—mapping out the geography of her surface space is one of Grant’s greatest gifts to her viewers. Borders are blurry, utterly traversable, so easily shifted and re-membered, but the forgotten parts remain like trace. Her hues and brushstrokes do this physically and visually, leading the mind, the eye, and the mind’s eye, across what becomes emotive plots of stories and land, both subject to housing boarders both plant and animal.

The six smaller works on paper in the exhibit are square, portals at the ends of imperfect bellows made of paint. “If I Were Lightning,” “Adrift,” “Lone Red Bird,” “Sticks and Stones,” “Single Cloud,” and “Boat Upon the Water,” all deliver the viewer to the object or action in the center frame, dare it be said—lens. In “Boat Upon the Water,” the marine blue and white mix to assist in forming a mat for the titular image in its barest rendering. The action literally surrounds the subject here and in the other five paintings in this series. The frames within the frames within the frames serve, as in her larger paper works, as something that is a part of and apart from that which they frame.

Like the title suggests, in the following poem by one of her favorite poets, Mary Oliver, Grant’s talent is not only in the painting, but in the experience of imagination and intellection that leads her there:

The Real Prayers Are Not the Words,

But the Attention that Comes First

rode the wind. Its eye at this distance looked

of butter. Speed, obviously, was joy. But

then, so was the sudden, slow circle it carved

into the slightly silvery air, and the

squaring of its shoulders, and the pulling into

itself the long, sharp-edged wings, and the

fall into the grass where it tussled a moment,

like a bundle of brown leaves, and then, again,

lifted itself into the air, that butter-color

clenched in order to hold a small, still

body, and it flew off as my mind sang out oh

all that loose, blue rink of sky, where does

And Why? Right? It’s the question we know not to ask too frequently about natural cycles, yet it’s the question that looms, looms both heavy and bright, around and inside our living. Why. It’s a cloud that has the most spectacular shape. A view of the most resplendent tiers and cliffs and earth tone. And tonally, Charles Scott Ross answers this question, perhaps inadvertently, in his large, sheen paintings, by observation and witness of human endeavor among inland and coastal color, shifts and outline.

Ross’ new “Journey” paintings, like travel itself, hold moments of rest, of stop, for the frenetic pace of our lives. These large paintings are the equivalent of pausal punctuation for the sighted hyperactive navigation that is impossible to avoid in the world. “Journey I” is bold, with a spinal cord of sorts painted down the canvas in the most gorgeous and subtle scoliotic curve. This painting, and the series itself, was born of the work that Guardian Scholars Foundation (GSF) (guardianscholarsfoundation.org), here in Iowa, does with youth who age out of the foster care system and need assistance, with mentorship and financial aid, for college. Ross is donating the proceeds from “Journey 1” to GSF. In order to represent the struggle that young people have entering the world at majority age, Ross combined the metaphor of uphill battles with symbolic color choices.

“Journey II” has more neutral and natural colors and presents more visual climbing. I love calling it by its name—Journey Two—how the sound of the title in my head feels like a dangling preposition (the homonym of “to”), a moment to fill in the blank that follows with anything—for all is possible. And it rings lovely—hesitatingly true. The gray and brown layering works like strata to hold— just tight enough—ellipses.

“Journey IV,” has its own cul-de-sac staircase, in stone white, and an upper and lower window that appears as passageway, or vice versa, opening out to the sky, or is it the sea? The solidity of the bottom right of the canvas holds up all the rest—offers foundation. How different this painting is in composition and color, from “Journey II” and “Journey III”—how full of choice and connection, multiple paths and groundcover. The precipices of “Journey V” counter the paintings grays and blues, sky and water, which seem there to catch us from our fall…or hold us in flight. One of the amazing things about these “Journey” works, and many of Ross’ paintings, is the ambiguous vantage: From land, sea, or sky?

If Grant is concerned with Man v Nature, then in this new series, Ross explores the relationship of Human Empowerment v Opportunity by way of land and water and sky. But in the oh-so-slightly varied paintings, “Tides In – Blue” and “Tides Out – Sand Color,” the vantage is clear, based on the interior of the boats which can be seen. Therefore, the sky is visually eliminated from, yet utterly implicated in, the painting. For it is precisely the Sun v Moon that creates the pull for that which comes in and goes out, alternately floating and beaching nautical vessels.

But where land and water come together, and overlap, is in the intertidal zones. Ross’ “Tide Pool” beautifully maintains its vertical stance without giving in to curvature. Here the white sky, very much in contrast with the grassy and sharp gray-blue edge, evokes a sense of not knowing what is over, not at, the edge. It is about the question of how that which goes up will come down, or will it? The pools of water are oases along an anti-Sisyphean journey. Because we do make it to the top, say Ross’ paintings.

And the intimated habitation of “Engine House,” in black, grays, and whites, conjures a house and its land on stilts. The three windows on the structure look out at us, the viewer, with almost-anthropomorphic features, which greet like eyes and mouth. Though the count and placement are off on the façade/visage as we know it, the sense that communication is happening can’t be ignored. Maybe that’s what black and gray do for us, and to us—they make us see the white around them like an aura, a halo that lights our way.

Find your way to this exhibit before it closes on November 29. 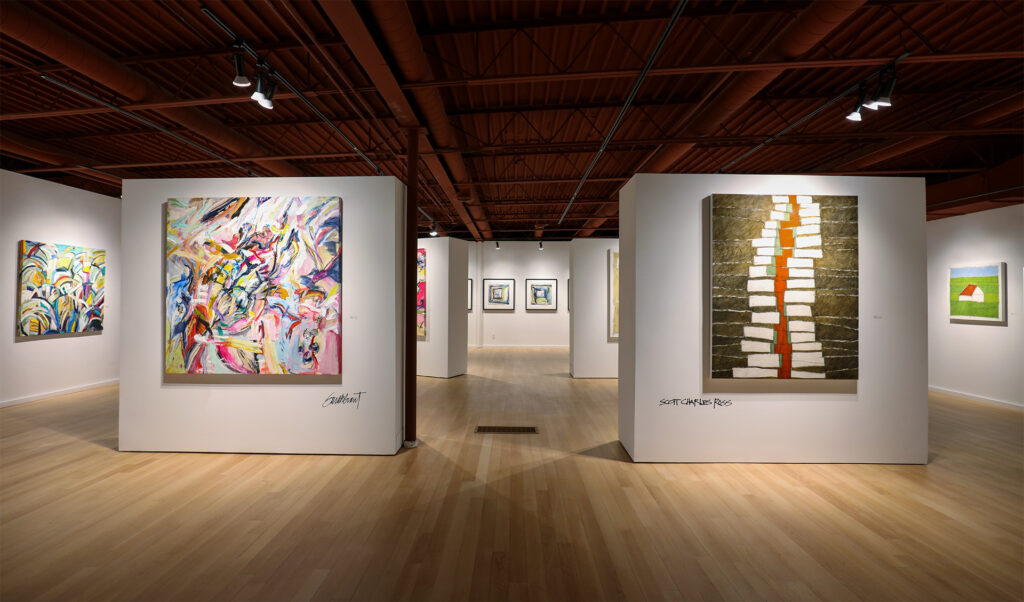 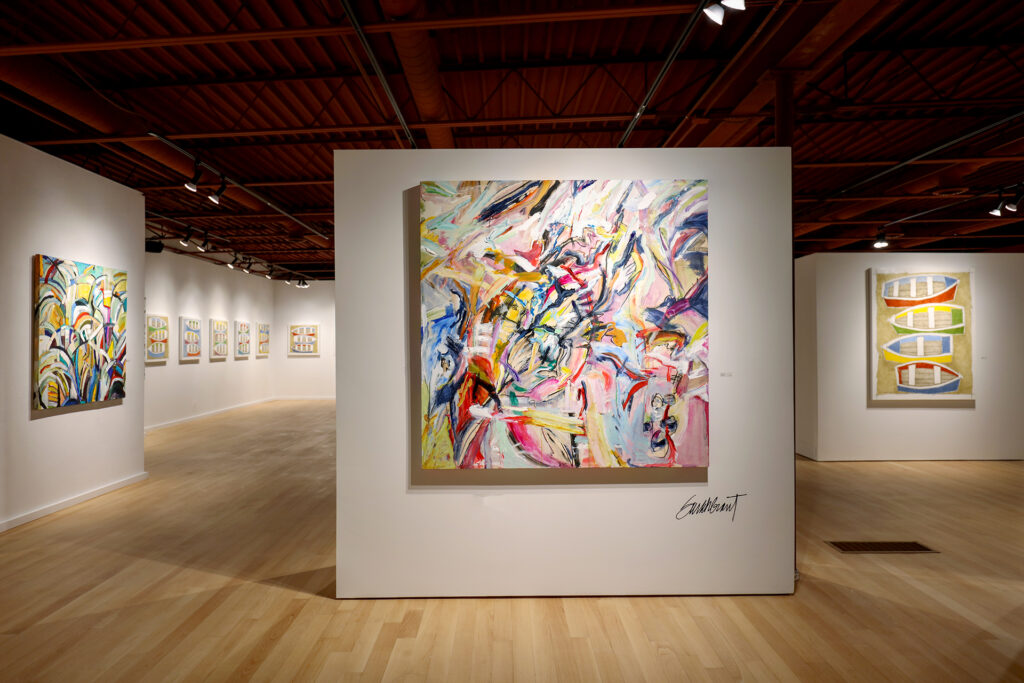 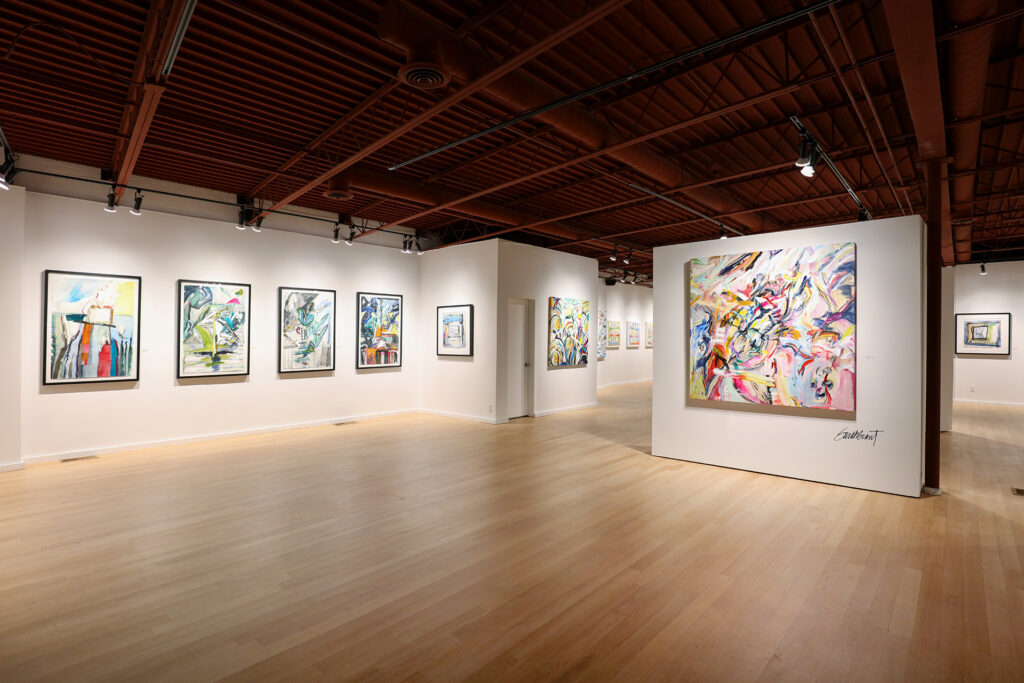 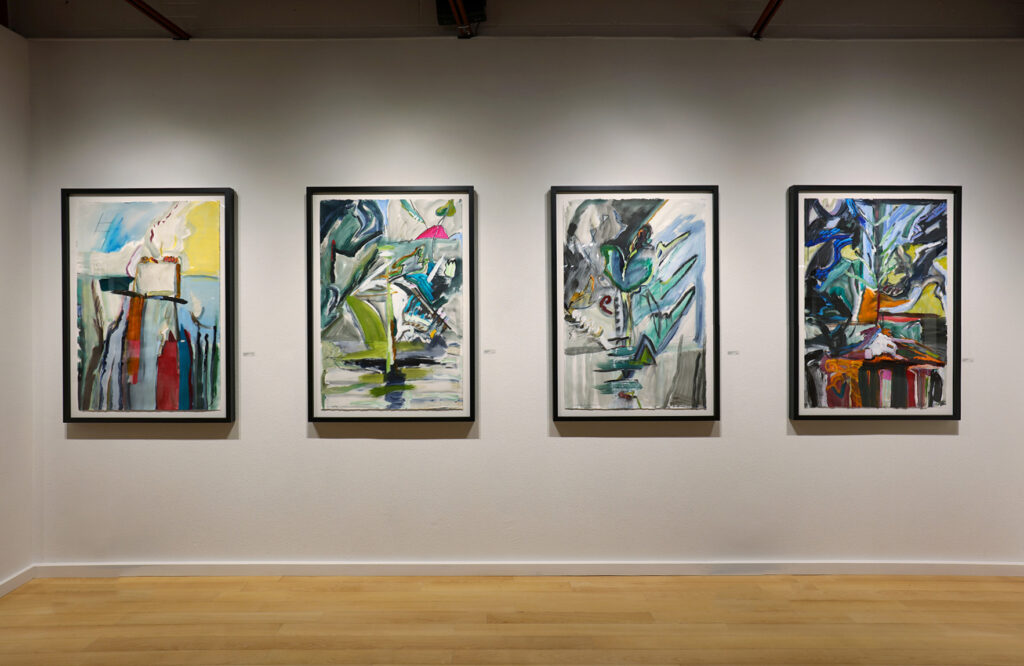 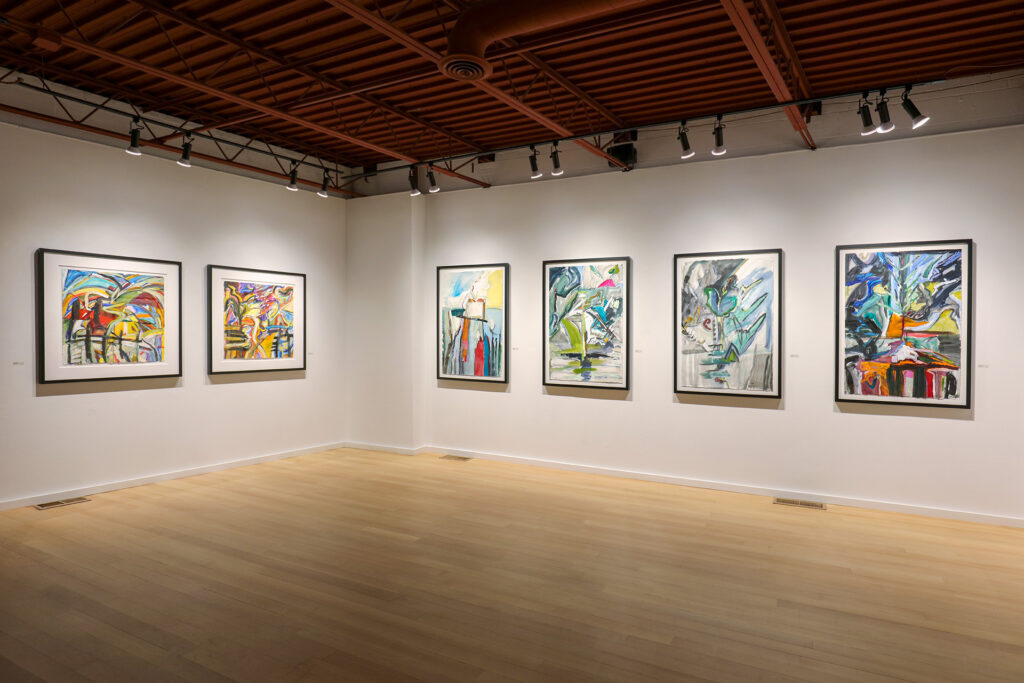 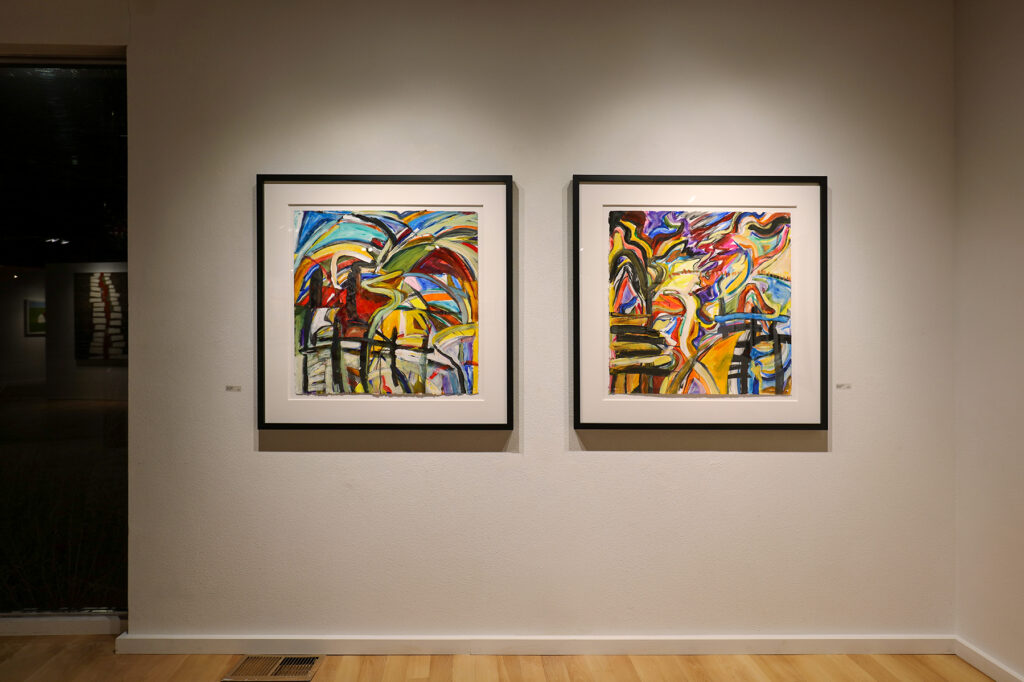 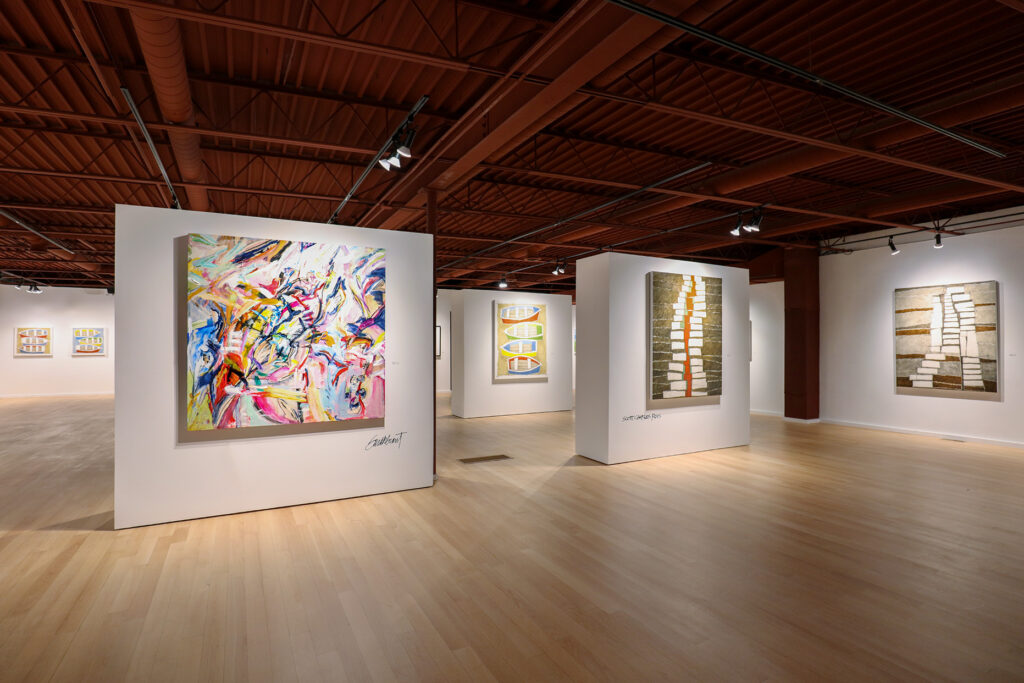 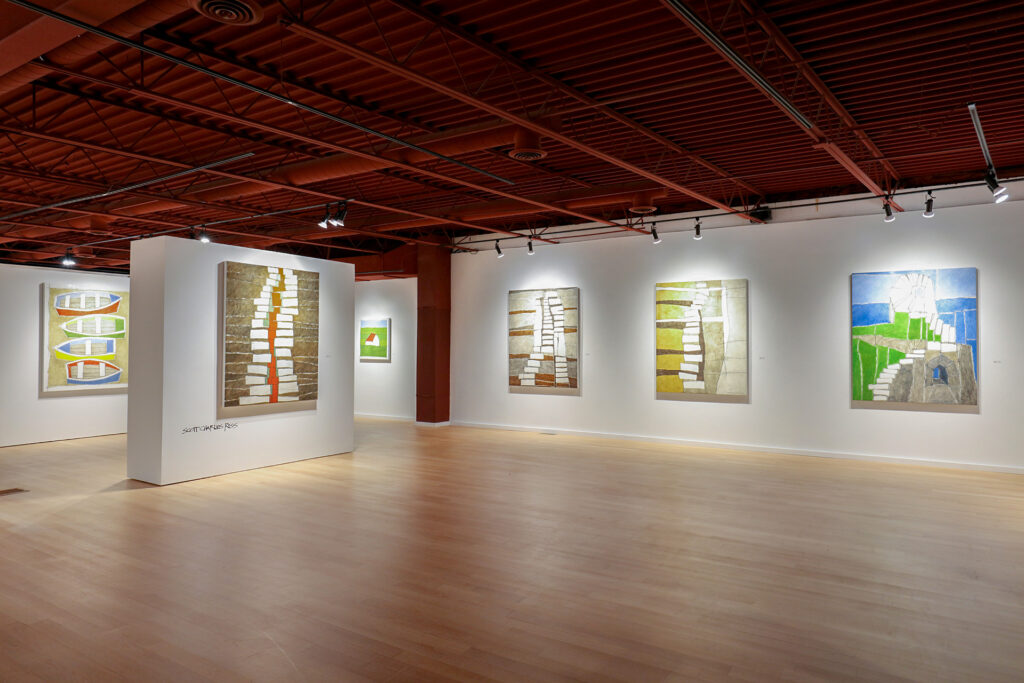 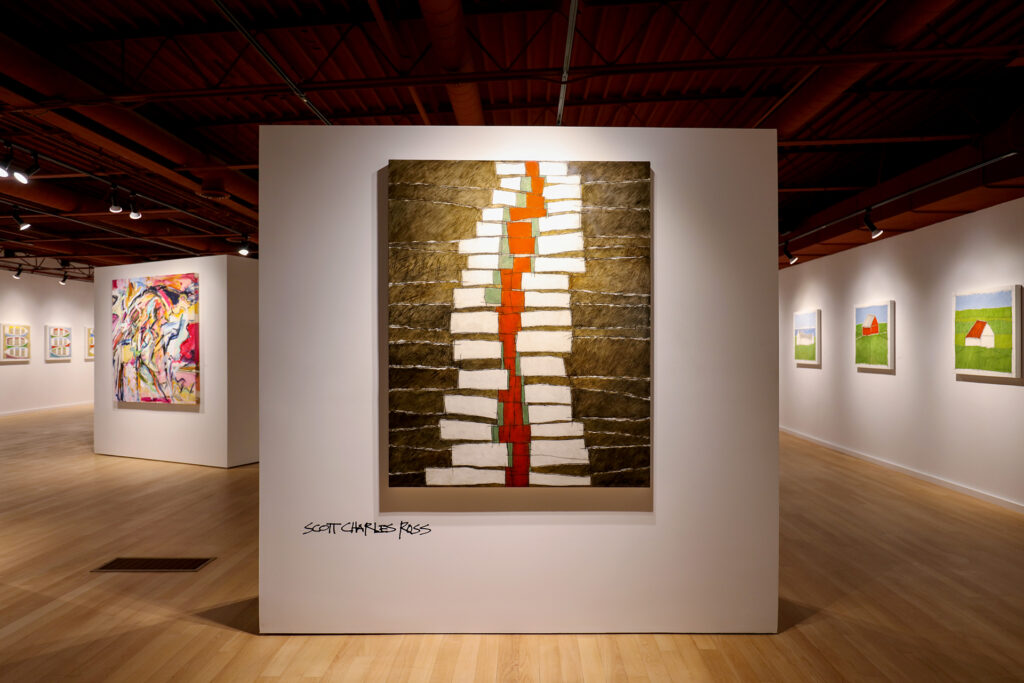 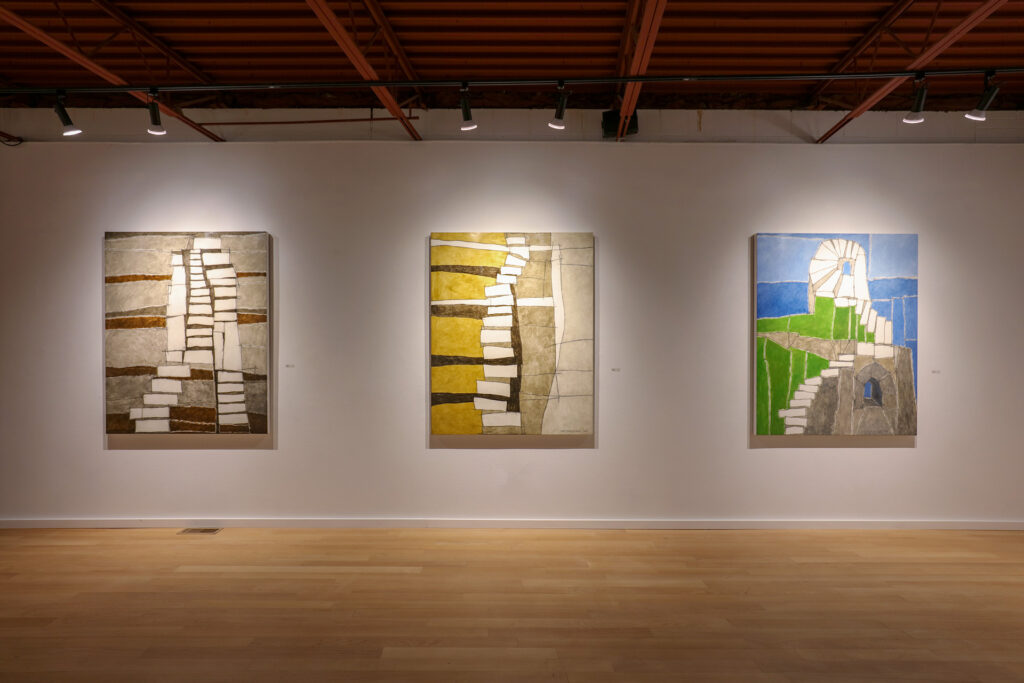 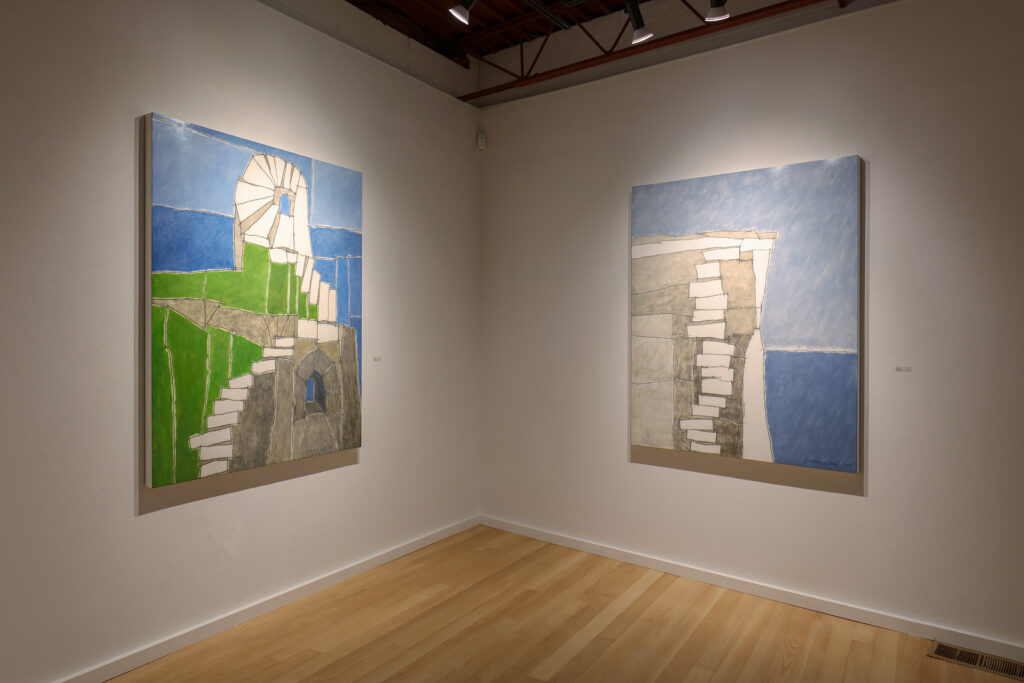 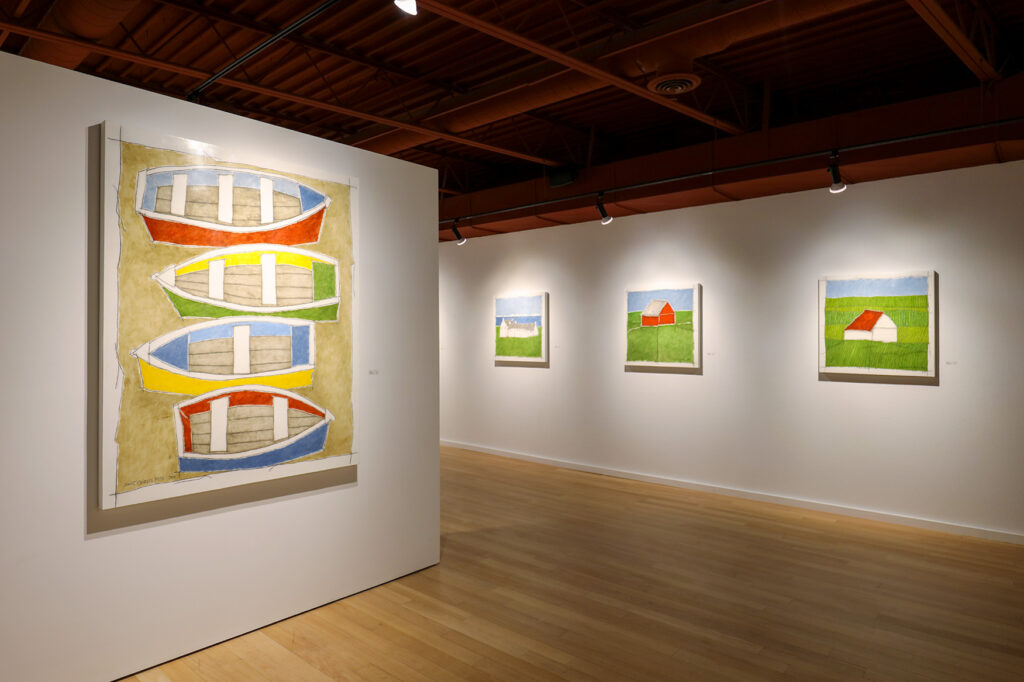 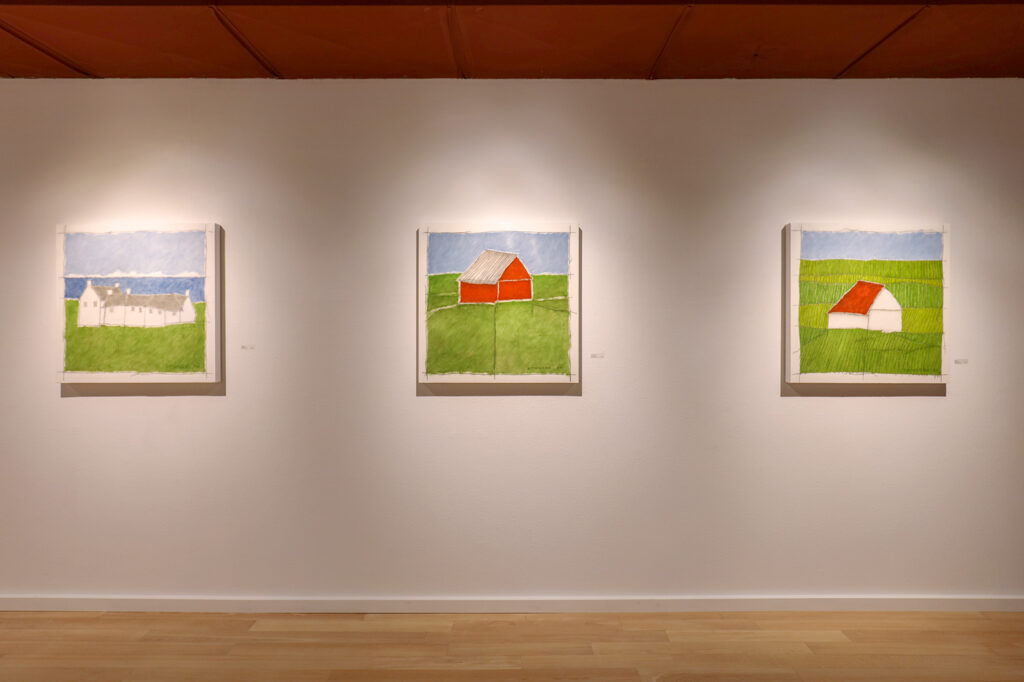 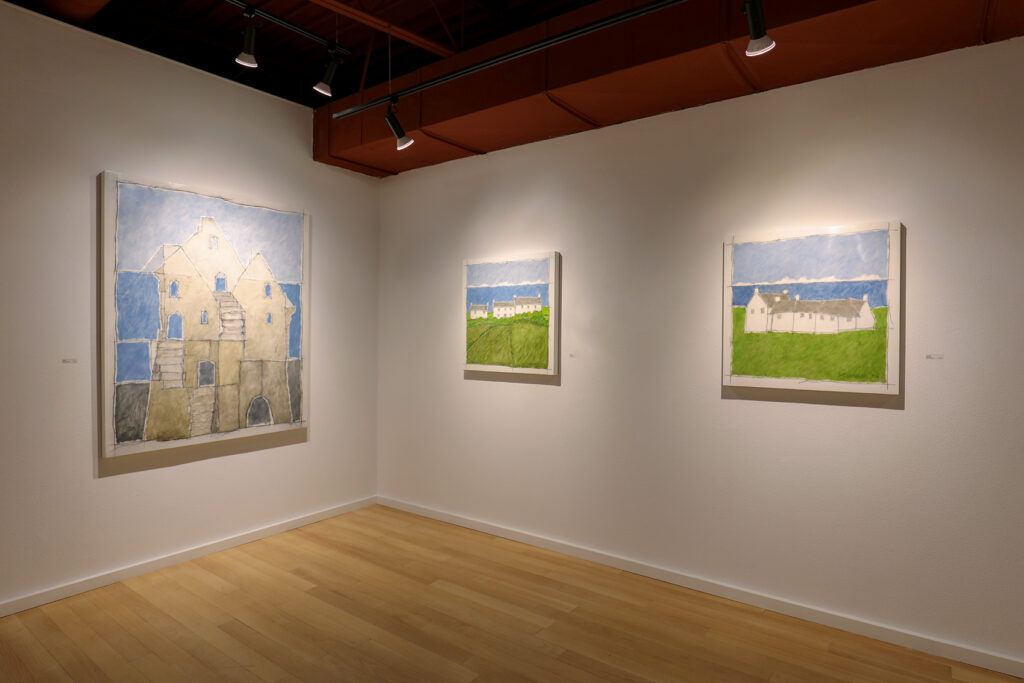 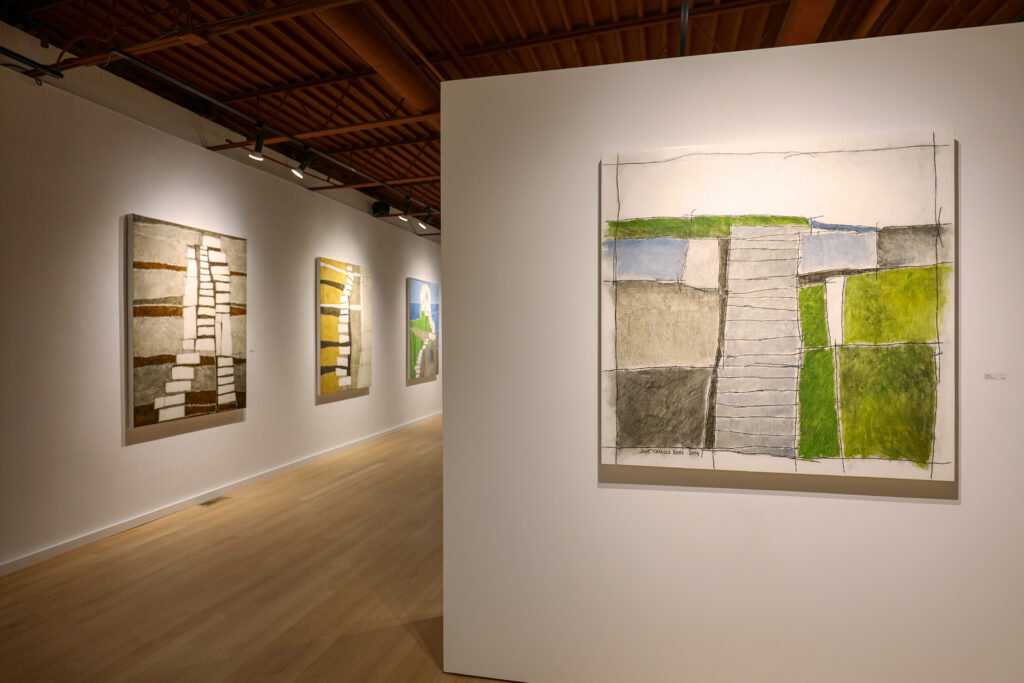 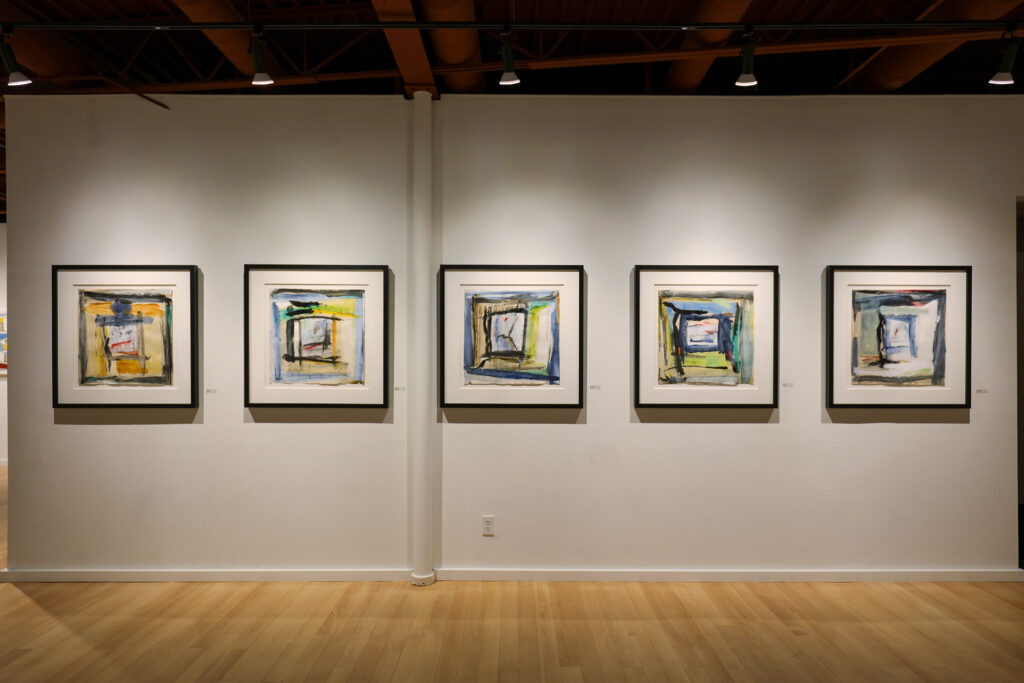 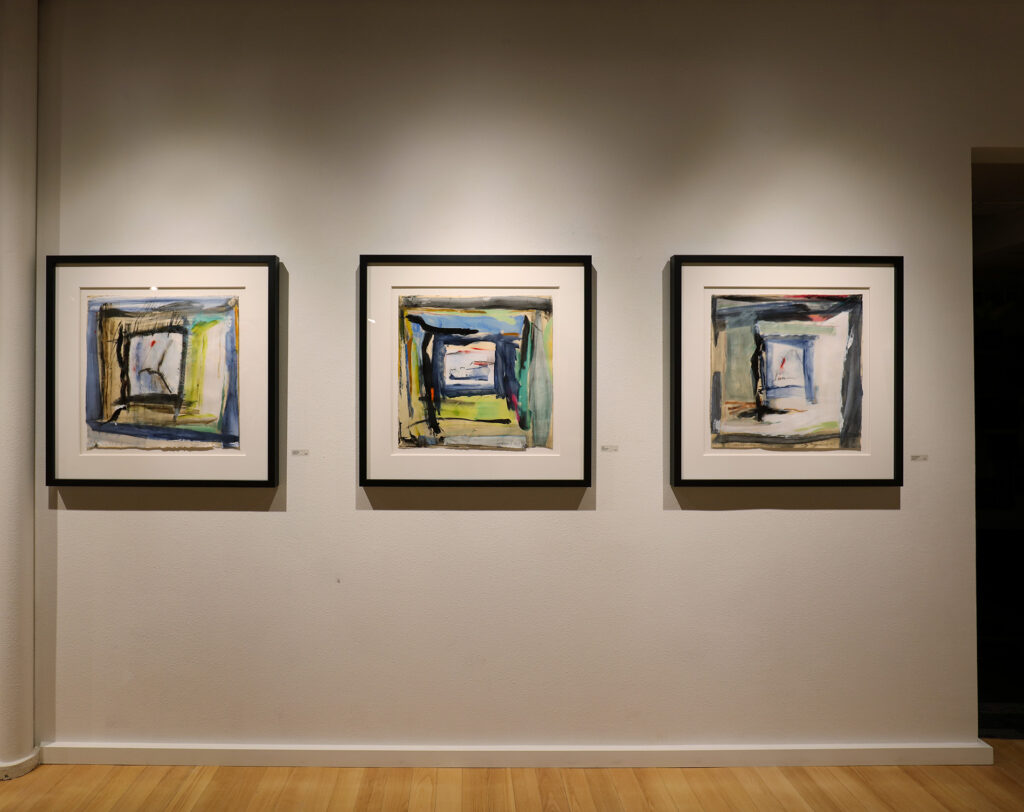 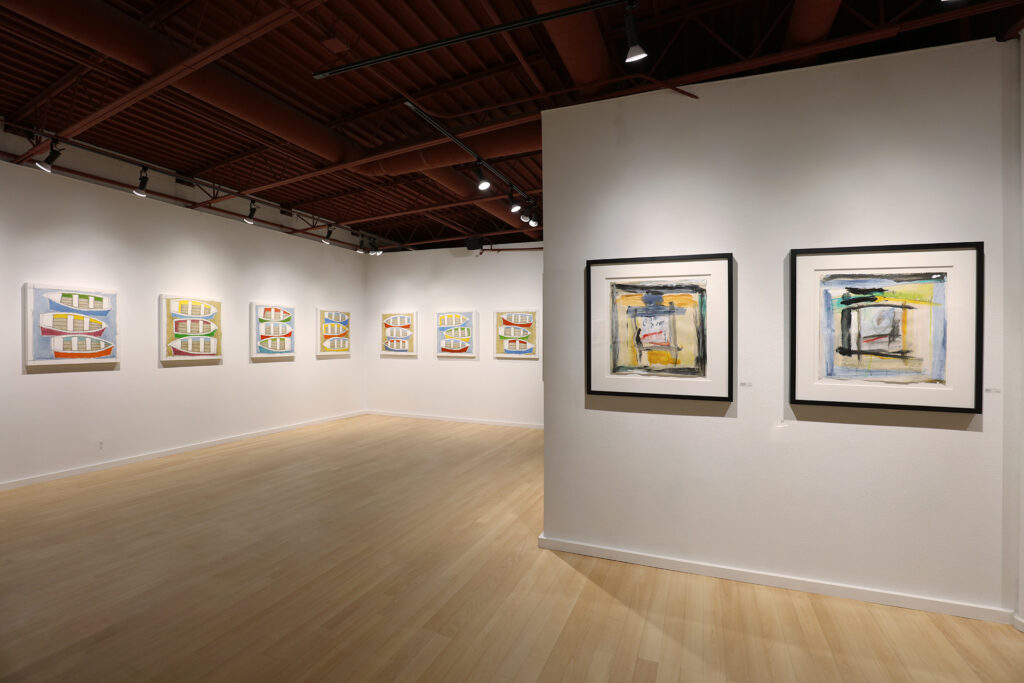 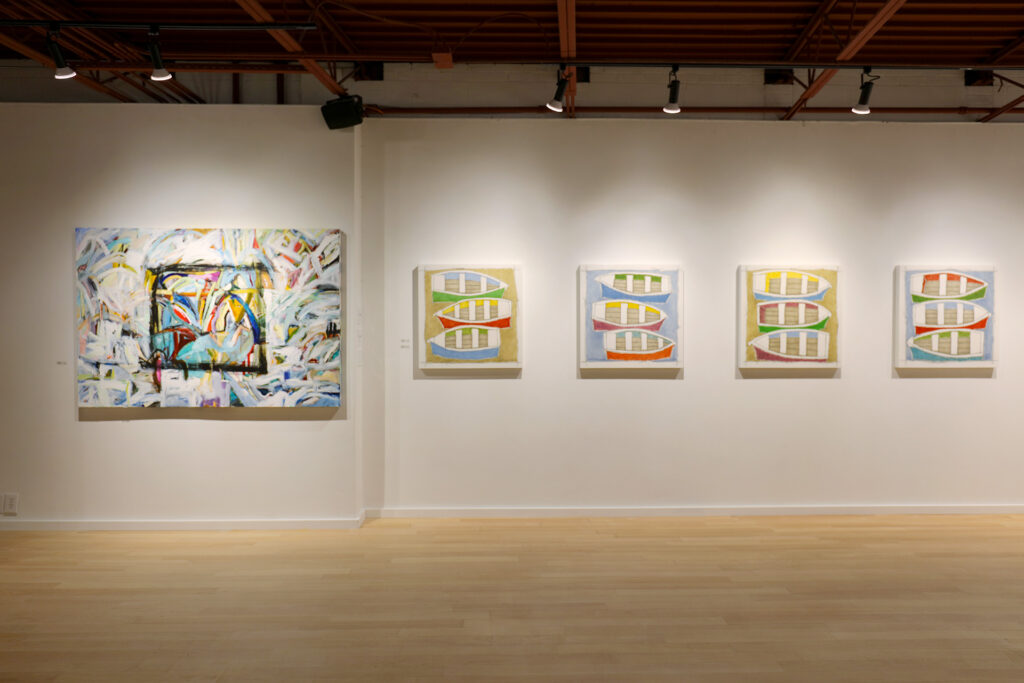 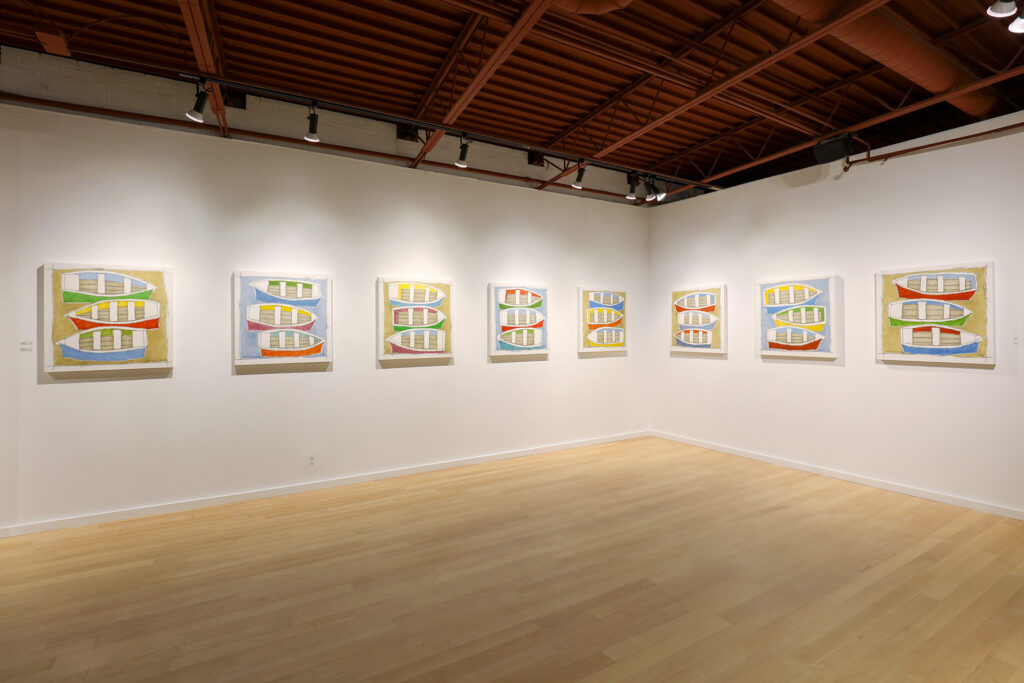 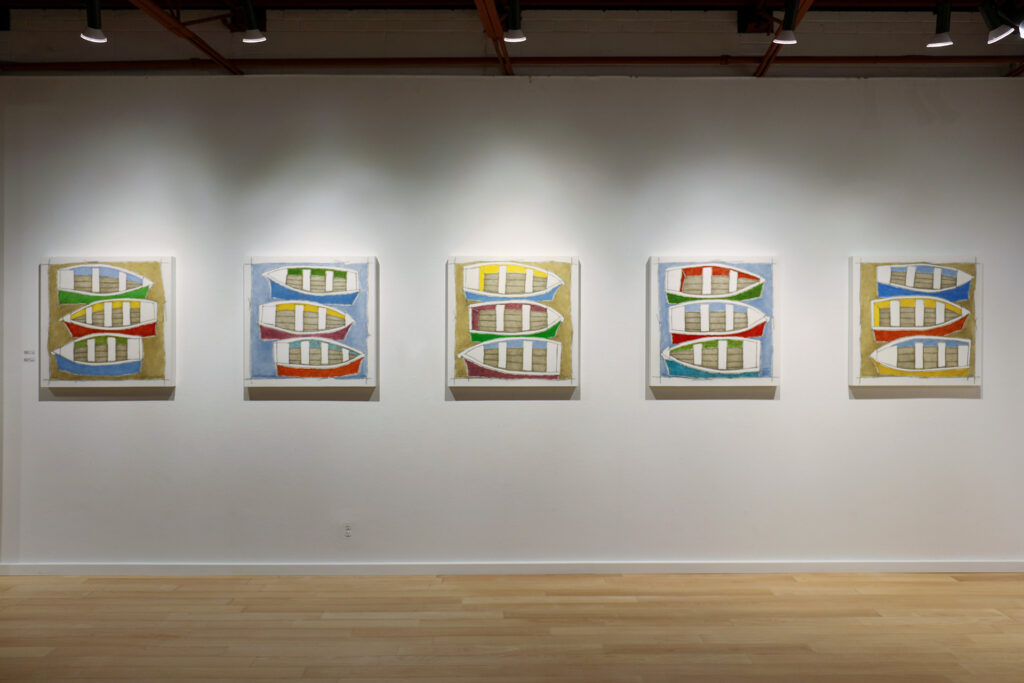 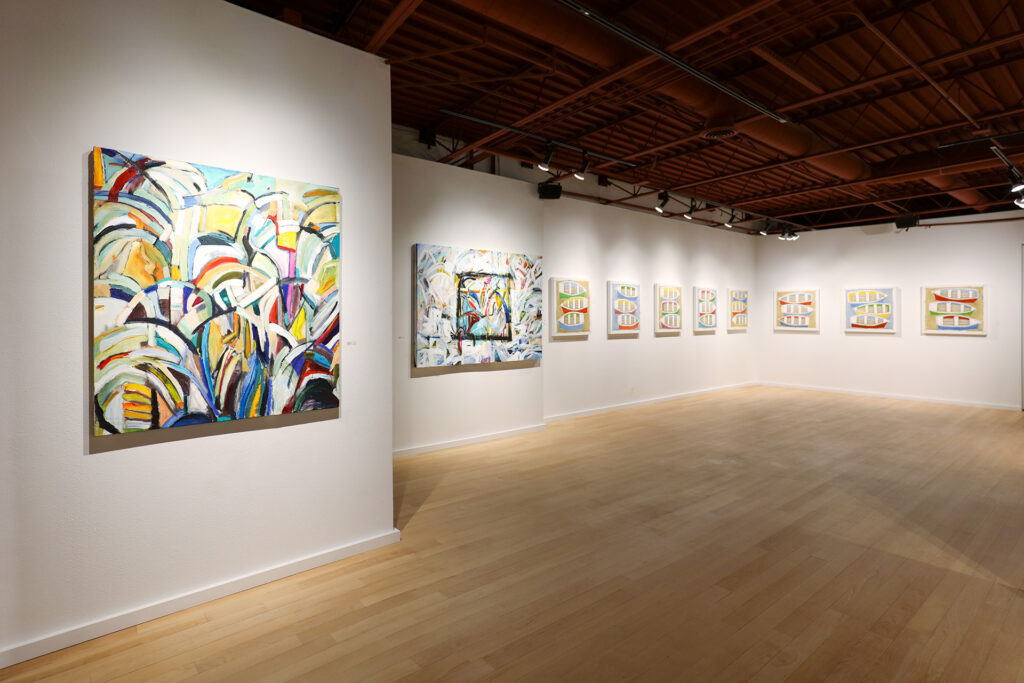 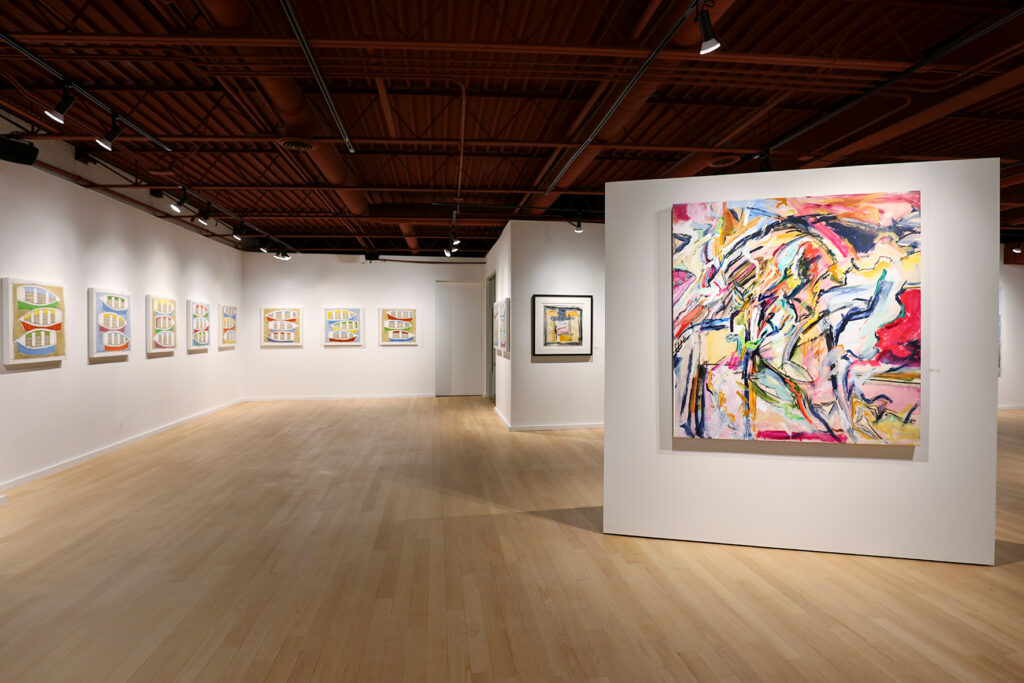 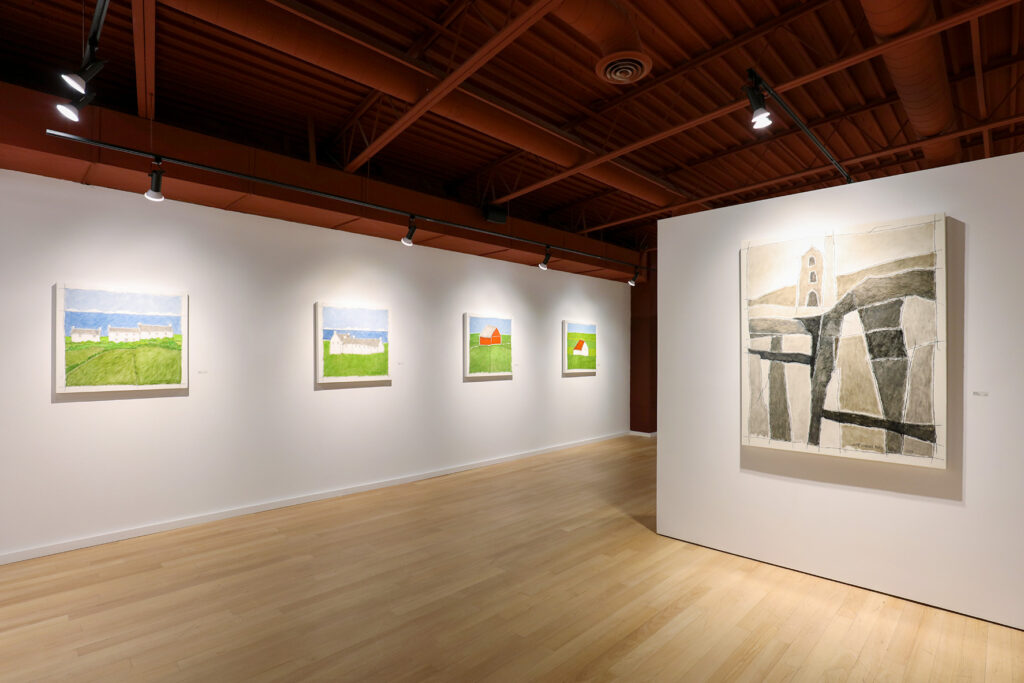 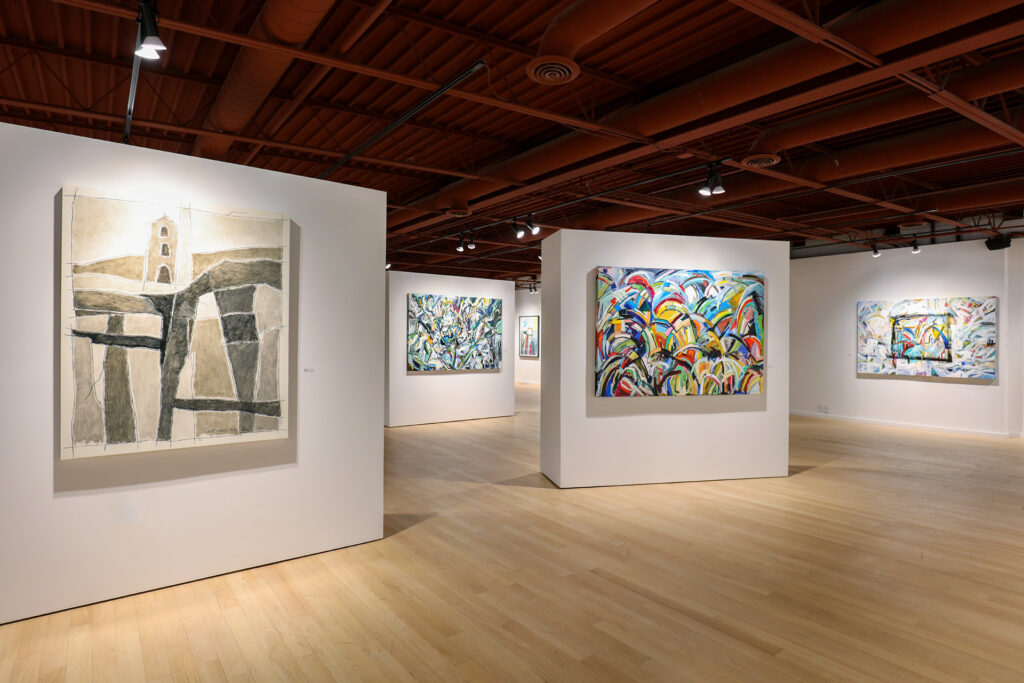 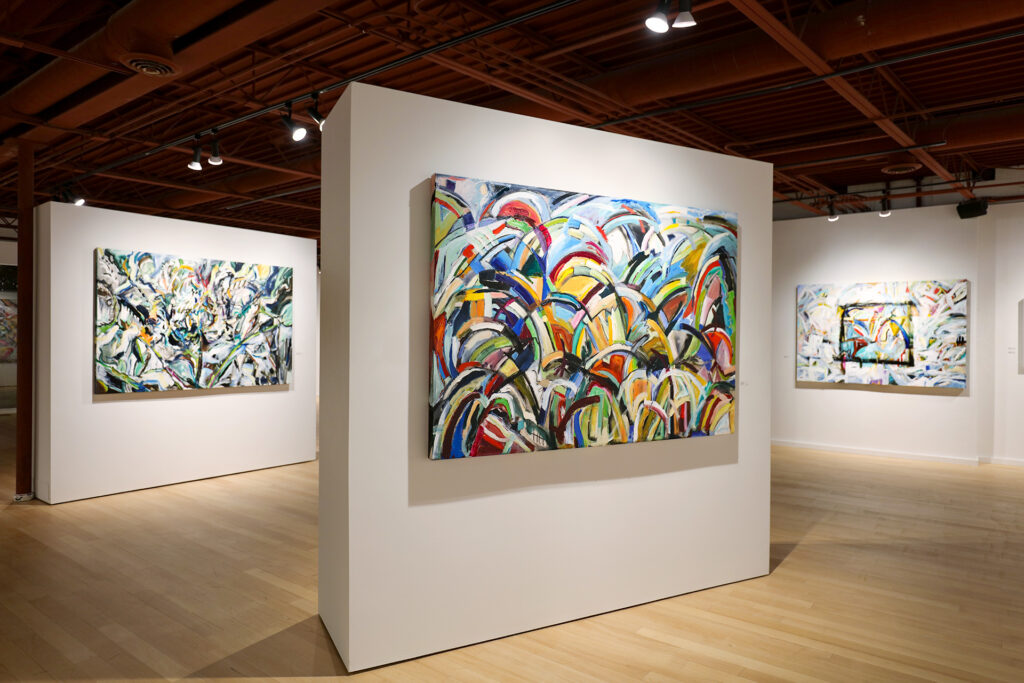