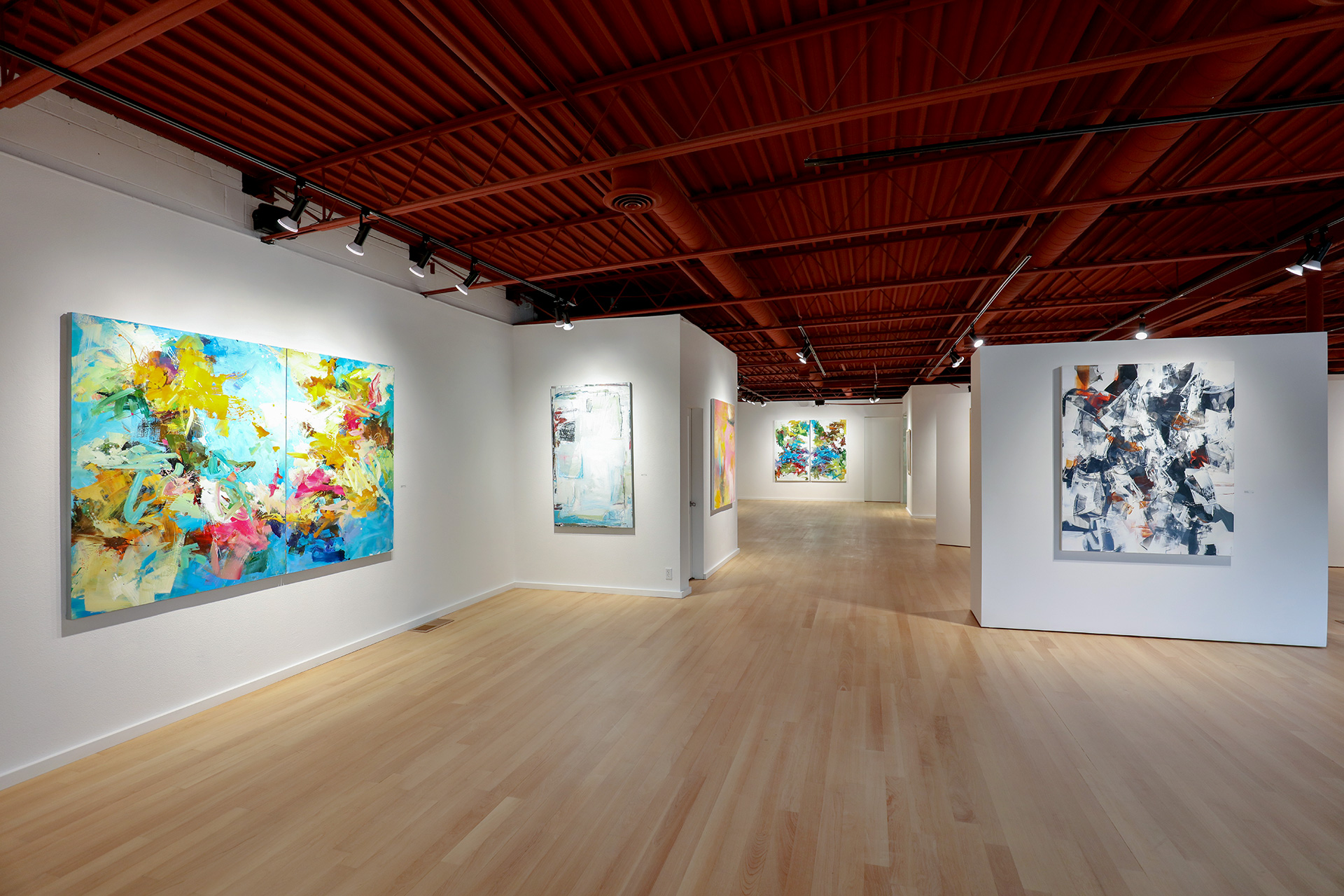 Conn Ryder has curated an exhibit that kicks and screams in the best possible ways—it is movement and voice that is necessary, timely, and beautiful in its gathering of contemporary women artists and their abstract paintings. With echoes, whispers and glorious hauntings of Hilma af Klint, Joan Mitchell, Helen Frankenthaler, Lee Krasner, and Elaine de Kooning, Kicking Abstract & Taking Names brings together thirteen artists; and this exhibit revels in the understanding that there is power in numbers. Included in the show are Johanne Brouillette, Margaret Fitzgerald, Sarah Grant, Dana James, Anita Jung, Ellen Rolli, Conn Ryder, Karen Scharer, Julie Schumer, Daniela Schweinsberg, Pamela Staker, Alayne Spafford, and Trixie Pitts.

“Between Us (V)” and “Between Us (VI),” by Johanne Brouillette, are large-scale acrylic and mixed-media on canvas, on which Brouillette pares down color, darkening the canvas with browns and blacks, but then pulling out the light with her whites. This contrasting of almost fan-like strokes and pieces ends in a layering and graying that becomes victorious through pugilist-like action, which feels swift and sudden. Brouillette’s choreographed marks are finessed from a realm of sensory improvisation, manifesting what appears as an abstract x-ray, though its mystery is in the effect being rendered with paint’s opacity.

Ryder says that Karen Scharer makes “sumptuous oil paintings […] that convey a soft vitality.” “Taking Flight” conjures two figures, species unknown, floating among the clouds, softened by the various blues of their sky—cobalt and cerulean, the background of periwinkle holding this painting’s gentle activity. “Mother’s Day,” on the other hand, gives the sense of viewing a landscape through a less-mathematical, more-emotional kaleidoscopic lens. The pale yellows and pinks, accompanied by white (which reaches for the frame’s edges), covers the darker lower layers of paint—the greens and blacks. It offers the viewer a sense of joy and hope, an overlay of new beginning.

The large-scale paintings of Margaret Fitzgerald, “Echo” and “The Wind” use primary colors to grow blades of green. But just when one thinks they might be looking at an emoted marsh or expression of winter, Fitzgerald allows a bit of dark red to bleed on and across the canvases. And suddenly the viewer gets drawn into the small signals and markings, while the new alerting color also expunges us from a potential bucolic reading.

“Supersonic” and “Through Rose Colored Glasses,” by Daniela Schweinsberg don’t necessarily use negative space, as much as they create the space that explosions leave behind. Ryder notes that Schweinsberg “tends to work with more limited palettes that allow her robust, energetic brushwork to take center stage.” But the stage she sets has also been perfected for the taking.  The speed that gets conveyed in the diptych, “Supersonic,” is also scored to be heard, symphonic tuning strokes at the left panel; flute solos hitting the off-beat to the right. In “Through Rose Colored Glasses,” Schweinsberg also uses the canvas as the stage on which she makes her mark(s). It is a hued drawing in paint, with the titular color not only at center, but since it gets around, leaving its trace and imbedding an idea that migratory motion isn’t simply about crossing lines, but also about making new ones.

Dana James’ “A Soft Detonation” is a multi-paneled work that takes on four distinct perspectives and palettes. Charcoal and white become part of the two concrete-colored panels, while pink and yellow are made somewhat neon by the purple heather color beneath them. Connecting these three areas is an all-white painted transom segment, which both disappears into the wall and becomes a visible joining centerpiece. “How to Weave Water” is mixed media on sewn canvas, which looks as if it is trifurcated, though there are small sections that betray that view. In Ryder’s words, “Dana James powerfully contrasts the fluidity of poured areas, softened marks and scribbles with the hard edges of combined panels and attached pieces of canvas.”

Ryder finds that the paintings of Trixie Pitts “have a fascinating juxtaposition of bold and muted color, delivered with softened yet fevered strokes.” In “Storm Chasing” there is the evocation of cyclones and sunshine, of the dark eye and the before and after light. The center white cross-like “figure” acts as if balancing itself as it leans toward and in unison with the black spiral. “Light Brigade” offers large clouds of color, contiguous and compact. Deep pink with hints of magenta collide most harmoniously with the glowing orange of the gloaming. Black infiltrates from side stage, but only serves to enhance the tone of the whole.

“Kindred” and “Conteur” by Ellen Rolli are “textured paintings [that] seem layered with stories, told with an exquisite proficiency in color mixing” (Ryder). Rolli color blocks, but the raw squaring off of her enclosures leak seductively. Rolli isn’t concerned with how bright and extreme her contrasts are with the blocking, but she seems to investigate architecture of the planar. Her mediums literally point things out, and the application of layers make right angles go organic. Her thin drawn lines tell stories and make maps of where she’s been and where the viewers may be going.

Julie Schumer’s “Coastal Rhythms” and “Dreamscape” “combine moody, almost ethereal passages […] with impassioned mark-making,” according to Ryder.  “Coastal Rhythms” is exemplary in its vantage: it implores the viewer to stand anywhere but at center. The horizon line here feels diagonal and the expanse feels askew. Where the black and gold and pink give way to blues and grays, a density exists which still us, but then the blue and gray let go themselves into the white left corner of the canvas, and the imagined extension becomes soothing. “Dreamscape” counters this with semi-ghostly lines, in erasure mode, that may or may not make figures or machines, but remind us that some seeing, no matter after sunrise or sunset, comes in black and white and can often be felt as afterimages of a linear experience, now tossed and tangled in a macramé web of remembering.

“Brightly colored, ordered commotion,” is how Ryder describes the “energized” paintings of Sarah Grant. “Tenting on the Snake” is a vibrantly busy scene that is reminiscent of Edvard Munch’s rippling outlines around his subjects. In Grant’s hands, however, the repetition and following of the lines actually become the subjects themselves. This leaves a focal point and object down the lower middle of the paper, that is also, itself, just a line. However, there is nothing that is merely itself in Grant’s work; in the paper work, “Stream of History,” for instance, she tells a story. Grant’s abstracts are narratives with no concern for temporal containment or capture. The painting that defies time, though, doesn’t always eschew place. And Grant likes a setting, a locale that holds the viewer while they ride her curves, her hills, her waves, the springs and sprigs of the historical that occur as individual moments, replacing themselves, replacing themselves, replacing themselves. “Stream of History” is a cumulative explosion in fast forward, as well as in reverse.

Pamela Staker’s “Stacked Horizon #5” is built of line upon line upon line, as the viewer scans up and down looking for the perspectival point of land or sea and sky, but what we find in the middle ground instead of a horizontal line that clearly bifurcates the canvas into top and bottom, is a triangular prism jutting “out” of the canvas, messing with the two-dimensional flatness of painting, and inserting this third dimension. It is a brilliant way to both acknowledge and dismiss Brunelleschi’s linear perspective in the same field. By doing this, the whole plane becomes a spectrum of pigment, or light. “Urban Therapy” reads like a collage of paint strokes, outlining, filling in, containing and extruding. The shapes here suggest something has been cut out or replaced with, in Ryder’s words, “big, bold, colorful statements that seem to vaguely hint at a subject no longer needed.”

Anita Jung’s two acrylic works on paper, “Coverage” and “Constellation” are results of her perfectly imperfect patterning, which, in Ryder’s words, “invites the viewer into an intricate, yet playful world.” In “Constellation,” Jung takes the three basic shapes: circle, square, and triangle, and charges them with comingling, becoming each other. The exposure of what lies beneath is created as if with erosion or a peeling away of color and form. In “Coverage,” the gray-blue rock-like formations atop the earth-tone and strata prepares the eye to dig deep, to follow the contours to an anticipated mantle.

Quoting Ryder, “Alayne Spafford’s work is like geometric abstract colliding with painterly, intuitive abstract […],” In “Forty-nine 2,” Spafford plays big upon her large-scale canvas. Her marks become what appear to be massive typographic elements with a curio of hidden shapes and relationships inside. The clear delineation of columns of color, and the shades within each vertical swath, create window like spaces to cut up the two large images that stand, complementing each other, and just touching. “Fifty-54” floats lantern-like shapes and parts across the canvas in an upward arc, creating the sense these are thrown and slowly tumbling back down outside the frame. Though the colors seem solid, with clearly defined accreted shapes, there is smaller movement within many slices, confounding a belief that surface space is about the additive, when there is nothing to add without recognition of the subtractive.

“I’m Not Going to be IGORNED, Dan!” by Conn Ryder, evokes plumed swimmers, connected and then untangling, fighting at the bifurcation line. Knowing the impetus for the titling being Glenn Close screaming at Michael Douglas in the film “Fatal Attraction,” gives this piece a wonderful pop culture referential essence, though the blue that holds the movement (Bodily? Intellectually? The coupling of flesh and mind?) and the parallel experiential connection that Ryder had with this entire reactionary concept, give the piece both its lightness and its weight. “Warrior Breeze” tries to contain its exuberance with white paint, but ultimately, is only kept in by the boundary of its canvases. Its deeper blues and wine colors appear to move horizontally as the wind would take them, with greens in leveling gradients. The trajectory of blues, especially, seem to encroach gently upon the scarce “empty” space. There is an almost mirroring of the two canvas panels in this diptych, which is reminiscent of a Rorschachian test, but one that is manifested rather than psychoanalyzed.

These thirteen artists, together, make answers to questions we didn’t know we wondered. They posit questions that are not rhetorical but are, alone, enough. The exhibit coalesces into a resounding solidarity, and it makes a short line from novelist Clarice Lispector come to mind: “To think is an act. To feel is a fact” (The Hour of the Star). The women in Kicking Abstract & Taking Names have managed to enact this, yet at the same time, to blur it, as well.