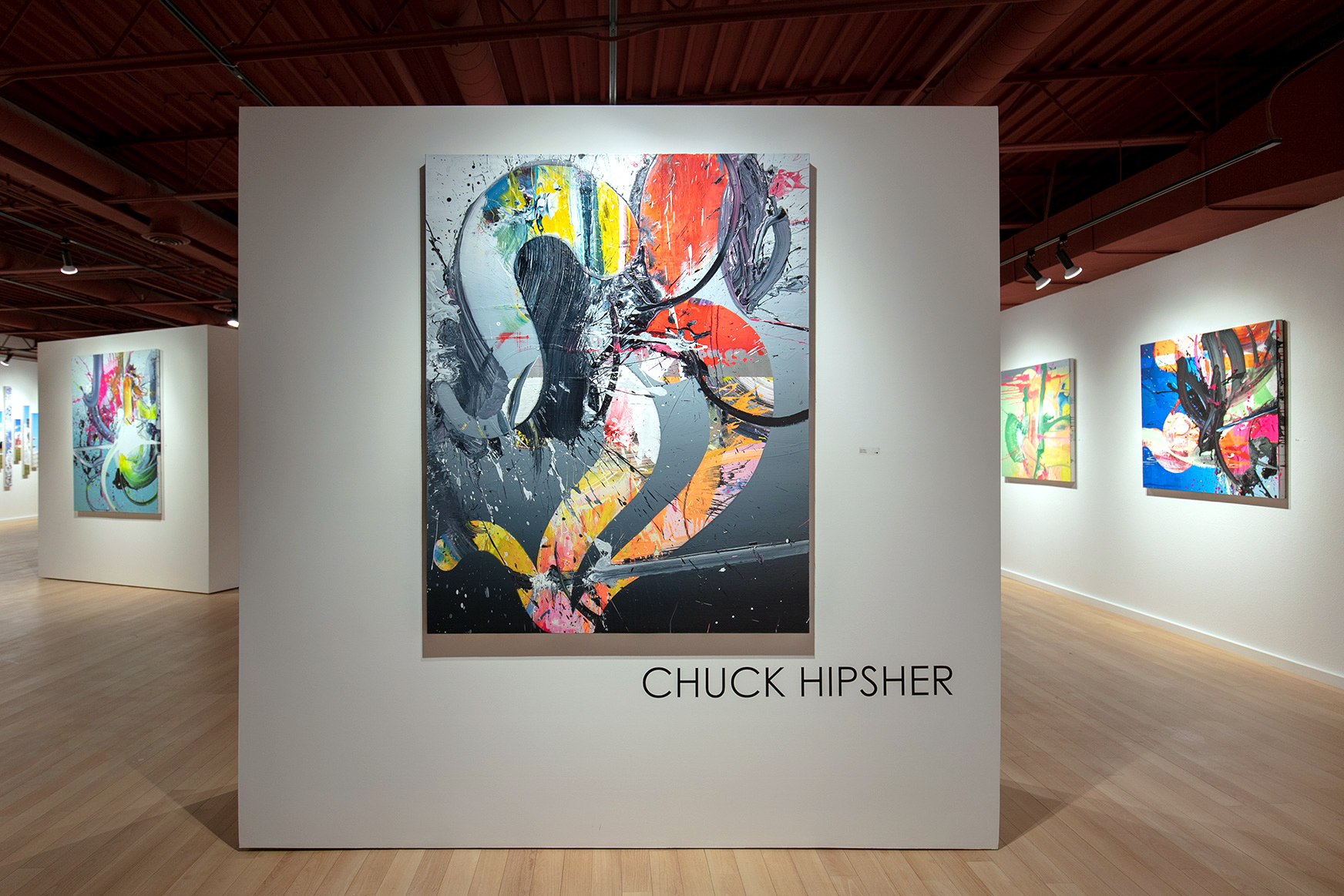 Time and memory are bridges, launch pads, landing zones. But in the new works of Chuck Hipsher, they are also beautifully excited, yet gentling, epistolary communiques that feel so complete, Stevie Wonder’s lyrics, “signed, sealed, delivered, I’m yours,” come to mind. In these large-scale paintings, one witnesses duration become the materiality of memory; for time is as experience and experience is as time. Hipsher has, through process, mastered the simultaneity of the ongoingness and undoing of shape and form/ing—its constant negotiation between creation and decreation.

Hipsher’s relentless recognition that a conjoined nature of intellect and emotion, with making and telling, comprises self and home, and is itself a fantastic and fascinating moveable and memorable feast. He layers his paintings as a graphic designer might build color, image, and line, but with his own three-dimensional tools, such as a paint roller sans handle. If one thinks of data portraits, his paintings are akin to less-graphical information portraits—portraits of hauntings, past and present, good and bad—portraits as homage and place—flashbacks that make the future as bright as solar and lunar orbs, and as tactile as velvet.

These abstract-impressionistic pieces are contemporary evocations which recall the work of Nebraska-raised photographer/experimenter, Harold Edgerton. One might remember the milk drop or the bullet through the apple—scientific explorations of visibility, or of the capturing of rupturings—slowing speed for consumption at a point of impact. The exhibition’s titular and temporal leap is also, of course, of space. Because time and space, as we know, are inextricably designed. And the duality, or Gemini-like nature of these two hand-holding twins makes a whole. The celestial and the mechanical (with a nod to the technological) is where Hipsher’s particular visible spectrum materializes, and all the end stops and line breaks of his painting, like lines of poems, indicate the elliptical, or merely the unsaid and unremembered.

Three works: “Didn’t We Have Fun,” “Remnants,” and “Reflector” are part of the Memory Series. These large diptychs are assemblages on canvas, and assemblages of canvases. Hipsher says, “it goes back to a left brain / right brain supposition […] that we all possess both analytical and creative abilities to process and understand abstract information.” “Didn’t We Have Fun” hearkens back to a period in New York City in the 1990s, when his days and nights contrasted starkly. ”Remnants” gathers “fractured, happy memories” from his childhood in Council Bluffs, Iowa, where his parents and teachers acknowledged his prodigious skills at life-like drawing; in this piece, he “represents colorful chunks and slices of that time.” The final in this trilogy is “Reflector.” Hipsher adds reflective sequins from which light leaps onto the wall and left and right panels imperfectly mirror each other; he notes that the “ever-changing quality of the colors the sequins provide are representative of the idea that all our memories are ever-changing, yet somehow still the same.”

Hipsher admires and has been greatly influenced by Willem de Kooning throughout his career, and during his years in NYC, he “mustered the courage to pay de Kooning a visit” at the artist’s Long Island studio. “Willem’s Gate” is a rendering and rending, for Hipsher was turned away, and de Kooning died the following year. The vibrancy of the top of this canvas, combined with the black strokes, all becomes like writing and reading from left to right in the West, when the lower right red becomes like liquid in the wind, taking the eye off into the direction of what we perceive as “future.”

The dense “Kissing Kate” embodies a story of a night in NYC, when Hipsher had the good fortune to meet the late great Kate Spade, who was then just on the verge of selling her bags. The candy colors of her earlier iconic striped purses can be found in the painting—no longer parallel, not perfect nor poised. Months after Spade’s suicide, Hipsher was finally able to paint about his brief encounters, and to evince his feeling of connectedness to her, another Midwestern transplant in the Big Apple.

And then there is “Fall of Eden.” At  9’ x  8’, this is Hipsher’s  “commentary on technology and humankind.” He notes that “tech was supposed to make our lives easier, yet not unlike the dogmatics of organized religion, it now somehow owns us and our every waking – and sleeping – moments. The Apple is a double entendre, of course referring to both Eden and our other god, Steve Jobs.” The apple is painted realistically, in order to grab the eye, make us reflect on the hold it has on us, the bite (or byte) that instigates our new, and utterly unoriginal, secular social sins.

Doubles, or couplings, appear frequently in Hipsher’s body of work. In this show, certain of these can be found, as well. Take, for instance, “Night” and “Day.” The almost negative quality found here—the unexpected white of “Night” and the black background of “Day.” And “Niskikigoi,” with its central pink fish, and “Osprey,” with its multicolored flight trajectories, speak to water and air, this dual system within which we operate, mostly without choice.

But then large paintings like “Boyz N Girlz” and “Gee” address issues of gender identification and fluidity. Hipsher believes “we should celebrate our differences and embrace them.” In the former, he uses a “soft textural pink material with what appears to be a giant milk bag upon it.” Hipsher acknowledges that, “at odds with this is a confused sea of blue attempting somehow to attach and connect with the pink panel.” In “Ze,” he has “taken the same symbolic colors designated to our sexes and interwoven them to a point of no distinction.”

“Thursday’s Child” is one of multiple works dedicated to the musician and artist David Bowie. Hipsher says he “first heard and fell in love with Bowie’s work when [he] was in a Children’s home at age 8 […] It changed me.” “Thursday’s Child” is the first track on Bowie’s 1999 album hours… The complementary components in this work, like a color wheel gone beautifully crazy, form almost guitar-like handles and bodies in the center of the canvas. Multiple types of fanning can be perceived here—the green unfolding or fanning out at the left, and the red again—this time at the top right corner (unlike the placement in “Willem’s Gate”)—appearing as if it is being blown by oscillating fan blades, or that the surface of the painting itself is speeding by us.

Because Hipsher, here, isn’t tracing time, he is documenting its sensation, its vertigo, its anxiety, its calm, its anticipation. The anticipation memory breeds—the paradox of these temporal leaps. He is not tracing, but free handing the past, filling it in. And from it, making large Proustian portals for himself and the viewer, as well.

I’ve written before about how Hipsher incorporates what appears as both organic and artificial—it is hard to decide whether or not that’s become a finer and finer line for him, or if in fact the division is so great, he is attempting to make the artificial mute, or moot. And in a previous essay on Hipsher’s work, I cite Paul Virilio’s assessment of our time: “Speed now illuminates reality whereas light once gave objects of the world their shape.” I see, as Hipsher’s work evolves, and as we move deeper into the millennium, having climbed over into a new decade, it is not the speed of light I think of … But the prepositional nature incorporated in that possessive becomes clear to me—it is not one that belongs to the other—it is the coupling of speed and light that envelops the thinking Hipsher transfers to his substrates.

With every new painting, Hipsher pushes the envelope further, and toward us, his audience; it is now our responsibility to open it, and read.

View works in this exhibit on Moberg Shop