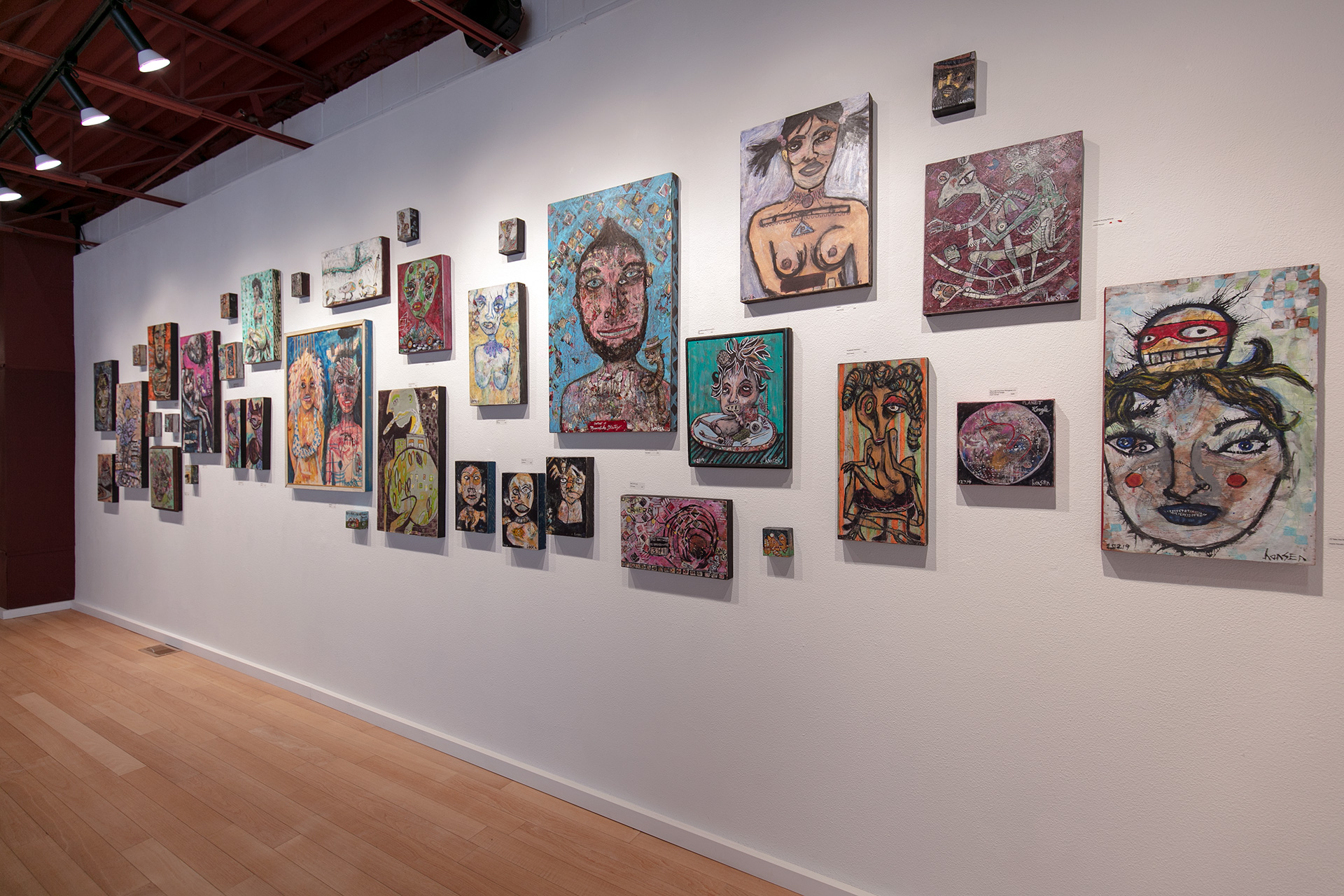 Frank Hansen’s new exhibit title, You Can’t Brainwash a Filthy Mind, might imply that something steeped or saturated can’t be made more of what it already is … or that you simply cannot undo the conceptual content of a concrete container. Either way, the ambiguity and humorous approach to often serious subjects get intense play in these new paintings. Hansen is a prolific artist, who yields works that speak of or to things he finds funny and poignant, which is much.

Working in acrylic and mixed media, Hansen makes merry work of earthly and celestial beings and scenes; and in the works on view here, he has applied “a vast amount of new colors.” Some of this expanded palette can be attributed to a color wheel he’s been using to “pinpoint what will pop or complement the first random color grab.” The “grab” he speaks of refers to his career-spanning method of choosing colors: “the simple answer is the closest tube I can reach.”

The way Hansen renders the/a world can feel like pure imagination, but it is always grounded in something happening, or someone experiencing, around or with him; he works closely with friends, sharing his ideas and paintings. There is little divide between what might be considered an observed reality, and an interior, emotional reality; they rendezvous with urgency in his work. About his “Planet Koogle” paintings, Hansen says, “the references […] are simple facts. All of these things live there. I paint photorealism; they are real.” The painting, “This is the Only Known Photograph of a Planet Named Koogle,” shows just that. As if the viewer is both satellite and microscope. It is a distanced view with a curiously-scaled figure: Human? Rabbit? Donnie Darko? There is a blood line, or a red river—or a river of blood? Could Hansen be alluding to President Trump’s monument to fake history, fake news, fake facts. All the while claiming Koogle is real. The joy is that the work offers so many illusive and allusive opportunities.

“The Night Was …Covfefe,” however, is an obvious reference to President Trump’s Twitter oops from May of 2017, where the tweet’s virality is embodied in the many-limbed being of this deep purple and bone piece. The creature is in a new style that Hansen has been working on. Here, the sum is so much more than its parts—skeletal bits do not actually connect in some areas; in others, joints are created. Meaning, after all, like creatures, are made.

In “Reminding Myself to Breathe,” we find autumnal colors, and the profile of a—centaur? It almost appears as if this male upper has the lower parts of a turkey, looking pregnant with both the natural and urban worlds, while simultaneously connecting to the external world. The esophageal tract-cum-road-cum-tributary leads to the mouth like an anatomical drawing gone berserk. And what, at first glance, may look like a cigar, then looks like an elongated speech bubble, and then materializes into the air that is breath that was the object of the subject’s reminder—inhale.

Stairs recur in Hansen’s work, and in “Princess WTF? (A Rejected Disney Hopeful),” they serve as the subject’s mouth. The climbing seems indicative of what could be sycophantic speech, failed. Her multiple faces are perpendicular and haunting, having more eyes set in than heads. The ears appear rather like wings than aural receptors. And the small judge/juror in the corner, wearing a Mouseketeer Ear Hat, says, “PASS.” Behind Princess WTF is a field of pink lines, evocative of hash marks; no group ever reaching a complete cluster of five.

The loose triptych, “Menage-a-Trois,” brings three small portraits together, yet keeps them apart. The black backgrounds make the pinkened flesh of the subjects seem more illuminated but less light (there is a gravity to this work that is belied by the facial features, their fish-like and flying rodents evincing water and air). “Sheepish Calliope,” is an eloquently rendered mixed-media portrait with an almost shimmering surface—visually generating what this muse’s voice might give the ear—vibrations that shift frequencies.

While Hansen’s portraits seem to drive him, to feed him creatively, his still lifes, such as “Wild Horses,” “Keester Rester Deluxe,” and “Nutbush Shrubbery Asylum,” embody and elicit intensity, as well. And “Black Line Matter,” the only strictly abstract line painting in the show, manages to conjure the portraits of Jean Dubuffet. Hansen’s signature hatching in the background is overlaid with a mixmaster of freeways—dark thick lines. The longer you spend with it, a Madonna emerges, with child; this happens almost at the very moment the materiality of the media also becomes real.

Don’t miss this charged exhibit of the return of the sur/real. And join us for the Artist Reception on Friday, January 24th.

View works from this exhibit on Moberg Shop