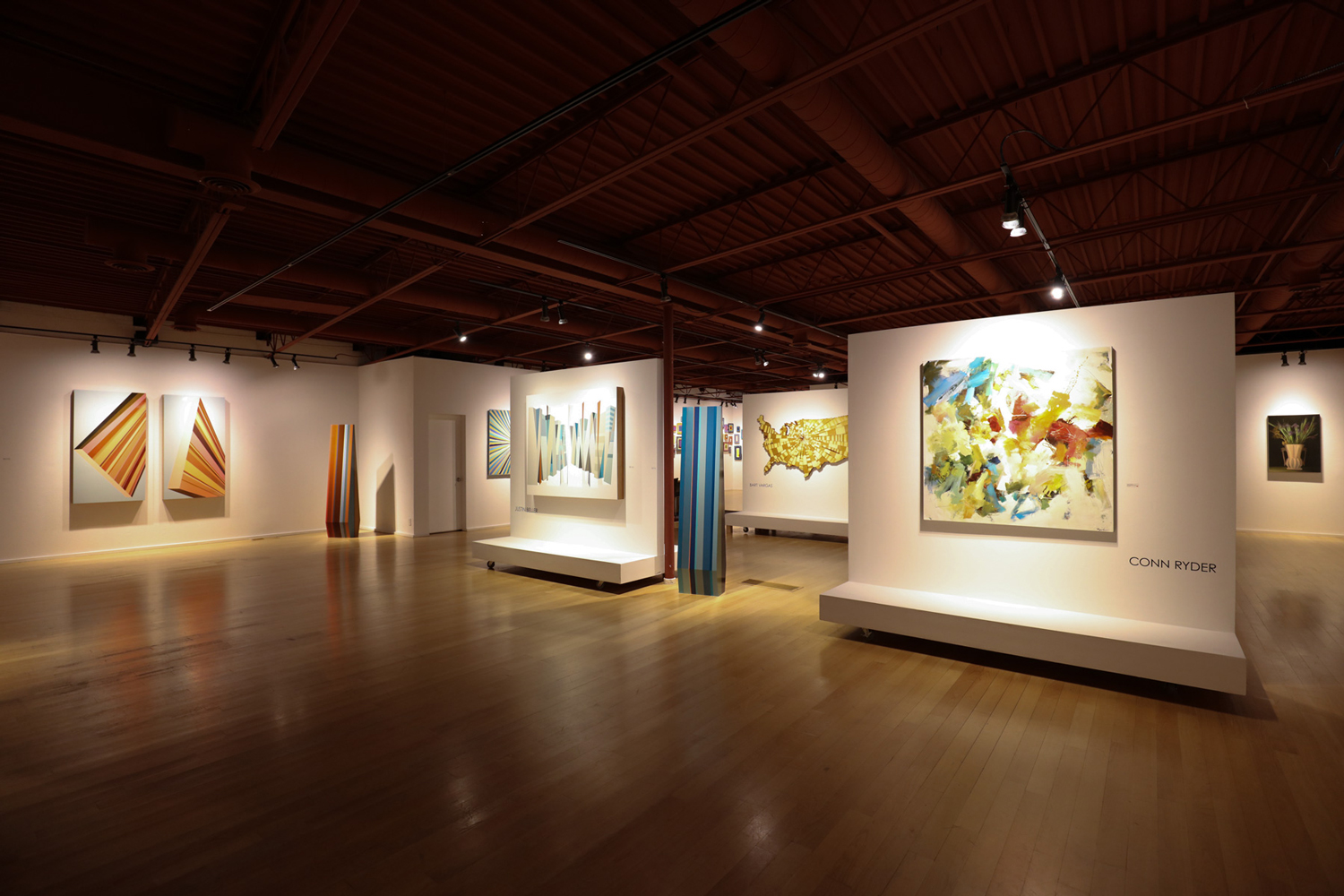 Moberg Gallery exhibit, Four Solos II, brings many textures, forms, and media together to affect any and all of our four humours. The visual and the visceral conjoin to shine in this new light of summer, and also to fan our sensibilities in the shade of thoughtful artworks. Four Solos II features work by Bart Vargas, Conn Ryder, Justin Beller, and Jeffrey Thompson, and runs through Saturday, July 8. Justin Beller works with acrylic, wood, and UV coating to create interior spacescapes that compel one to look around, in every direction—for the viewer to be center, a compass, in order to embrace the 360. His diptych, “Forever,” is of two represented panels, in a Neopolitan color scheme, striped, and diagonally floating on two wood panels hung vertically. One appears to be pointing, or traveling, upward, while the other seems to be doing the opposite—stripes running down toward, and disappearing into, the bottom right corner of the frame. This makes the eye start low and travel upward—and then downward on the other side, as if travelling over a peak. Beller’s “Freya” is a mixed-media work on panel, in black, white and gray. Geometric shapes and lines of many angles comprise the structures within, and nothing organic or curved is allowed. What these lines and shapes deliver are directional leanings, becoming puzzles already put together, given to the viewer in toto, so that the sum of parts may be questioned and reconsidered in their finitude. Beller’s lines lead the eye elsewhere, outside the frame, where the real saga may exist.

Beller’s two sculptures, “Tower” and “Tower II,” stand just high enough not to “tower” too much over any one or thing, but are tall enough to create a sense of human scale. In being sited where the viewer can walk directly up to them, the idea of out-of-reachness associated with towers becomes shrunk down to a sense of accessibility. These sculptures are vertically striped to extend the towers beyond their physical form and height. In Beller’s words, “The overall effect creates greater spatial awareness and a deeper appreciation of our immediate surroundings, ones that are ultimately as intimate as they are boundless.” Conn Ryder paints “from the gut.” Her acrylic and graphite canvas works are expressive abstractions, born of “turn[ing] her insides out.” Each work carries its own flesh tone somewhere in the composition, conjuring different melanin forms. The emergent results appear like controlled explosions that can now hover in the eye and mind of the viewer. While Ryder is not interested in telling stories, her work does make starting points for small emotional events. Ryder gives backdrop, in the guise of color—be it blue, black, white, or green. Take “Artifice & Outright Fakery,” shown above on right,  one of the more minimal of these abundant and maximal works—with its base of white, it also appears the most orderly and bright. Despite its clear abstraction, there is a stacking of strokes that comes through —a wider and heavier base carries the weight of a narrower and off-balance pile. Mixed with its pinks and purples overtop the earth tones, it becomes as visual schnapps, producing a soft inebriation. Ryder’s dyptich,“Pink Flamingo Bombast,” plays with the color of grass and pink plastic, blue sky and brick—all sun drenched in warm yellows. That some visual jazz scat version of something considered kitsch—pink flamingos—would emerge in the language of fine art is why and how these two canvases stand strong, together, to present a space, or vertical platform, from which Ryder catapults and emotes. The canvases are covered with strokes that expose the pallet knife-edge, and present the mandate that things come apart (the left canvas) but that parts also make contained form (the right). Incorporating rays into his work is a primary action for Bart Vargas, and there is no work of his in this show that does it with more innovation and urgency than in his large work, “Not My Country”. The resin and latex on panel piece is in the shape of the United States, in reverse, but rather than cut into or overlay segments in the form of states, a center—Des Moines, only 355 miles from the geographic center of the U.S. in Lebanon, KS— is located from which each ray radiates a segment of ringed panels. These rings conjure the annual rings of a tree. The difference is that here, the concentric circles are cut up in a way that invokes a cross section sliced again, and they don’t meet to form perfect circles. What could be considered an indicator of growth is now reminiscent of a shattered mirror, and the resin finish gives it the sheen of something encased after a perfect splitting.

Two of the gallery walls are hung with Vargas’ installation “Doorways,” a salon style grouping of latex paintings on panel. These are purposefully imperfect homages to the shape of the sqaure, more centered than Albers’ works, and also more rugged, honoring a concern with the three-dimensionality of the panel as well as the two-dimensional issue of the color-studied surfaces. A constellation of small nude ceramic figures hangs on another nearby wall. These figures are painted in different shades of orange, as well as the parent reds and yellows, but also some which are gray, green, and purple. Only a few appear to have gone through the glazing and “firing” process. The closer one gets, it becomes clearer in whose genitalia-free image these are—the “Trumplings” are as mesmerizing as they are creepy, like small statues of infertility or impotence gods. Chubby and flailing like infants, this clonal cluster is a very light visual equivalent of prolonged exposure therapy, a humorous inflection of all that could be considered traumatic in the country currently. The shadows of theses 63 figures (in numerology, 63 is the number of tolerance and humanitarianism) create an eerie extension of legs, almost begging for growth, or in conjunction with the arms outreached, to be removed from their wall. If they could only turn around or get down, then they could either scale the wall properly, or enlarge their own scale and walk away. Jeffrey Thompson creates technical wonders and referential works of stunning composition and light, influenced as he is by Caravaggio. His two oil color pencil works on display, “Alexander McQueen” and “Coco,” are based on iconic photos, and are influenced by the work of Giuseppe Arcimboldo, the 16th-century Italian painter known for his seasonal portraits composed of fruits and vegetables, with resemblance to recognizable historical figures. In these two works, Thompson draws, or builds, the two fashion designers, who were considered pioneers during their respective reigns, and “whose works altered the fashion world, blurring lines between what is conventional wearable fashion and art.” Using flowers and leaves, and a berry as a jewel, he creates portraits as striking for their magnificent lines and color, as they are unsettling for how closely they resemble human musculature anatomy—to be reminded of a human without skin, yet to recognize immediately the figure. This uncanny combination is made more intense in “Alexander McQueen,” considering McQueen suicided just months after the Tim Walker photo, on which this work is based, was taken. Thompson has drawn the skull on which the subject leans in this same manner—a skeleton of flowers. But here it creates the opposite effect, and appears as if it almost adds a layer over the bone.

Beguiling in their darker status, Thompson’s still lifes in oil exhibit his interested in “how images are receded into darkness and shadows and how some images are brightened into light.” And in the tradition of 16th and 17th-century vanitas paintings, Thompson gives us his own “Vanitas,” where the skull makes another appearance as one of the objects of mortality, with burned out candles and cut tulips. This painting, in the timeless attempt of staying life, is a semiotic tableau of all our histories, no matter the decade, the century, the millennium. For Thompson’s “implicit goal is to contemporize the baroque method of painting with still lifes whose subject matter are expressive of current tastes and commerce.” In the painting “Magilla,” Thompson plays with the stillness of life by incorporating animated cartoon figures from the mid-20th-century television show The Magilla Gorilla Show. Mr. Peebles is there, too, commanding Magilla to perform. This performance is one of multiple movements: a hula hoop twirling, bananas being juggled, hoops being caught, so that the beast is balancing on one foot. Mr. Peebles is almost swallowed by the dark background of the painting, but Magilla’s face and chest emerge from the light. It is as if the viewer can see, because she can imagine, the movement. Like Thompson’s portraits, these subjects are mediated multiple times (initial drawing, televisualization, painting), but “Magilla” represents nothing that was alive to begin with. Thompson, however, somehow manages to bring to life and keep alive these two characters in a way that can never be done with traditional vanitas.

Artworks are maps of movement of past, present, and future, with keys to help us navigate all. Don’t miss the work of these four artists, each bringing something singular to our collective culture, space and timeline.