Moberg Gallery’s second exhibit of 2017, Four Solos I, features work from Andrew Abbott, John Phillip Davis, Travis Rice, and Senid Tabakovic. The gallery’s previous exhibit created a temporal focus—duration, exposure, documentation, and memory. Four Solos I creates a more spatially concerned whole, with a notable transition from earthly works, in both media effect and landscape pieces, to abstract works that conjure digital screens and atomic-structural compositions. From geological to geocentric, these studies of shape and figure, built and shattered, are compelling for their insight and range. Travis Rice explores coming together and breaking apart, and the changes those processes imply. In his works, many polygons make appearances, but the metrical element of the triangle’s centroid appears to be the driving factor in proliferation or division in many of his pieces. Rice’s charcoal works are intimate studies of geometric form and chiaroscuro. In “Fractured,” for instance, wood-grain-like lines combine with the radiating circles of light, which in its diffraction seems not only to illuminate, but possibly act as factor in creating the coming undone of pyramidal structures. In this fracturing, the few create the many. Destructuring, in Rice’s sharp works, makes of two, three, and makes of the extant, new.

Rice’s use of color and media, such as pumice and glitter, as well as the layering of media, assist in emerging the panel into the space beyond its two-dimensional surface. There is an implied movement here, which even appears to change speed. The sheen of certain of Rice’ works, coupled with how rooted they feel in the infinitive, can instill an experience of lost-ness that feels transfixing and meditative for its tandem feeling of searching. In the way a hologram shifts as the viewer shifts, Rice’s works rely upon perspective and angle within and outside the frame.

“Glacial Horn” is created with acrylic, resin and vinyl on panel. Its vibrant colors and unidirectional purpose somehow offers the viewer quietude akin to experiencing a natural phenomenon, alone. Rice erects this geometric structure into a night sky filled with asters of white, dotting the enveloping blackness. The crystalline structures in this analog (yet often appearing digitized) world represent natural elements, and offer amazing multi-dimensional moments. Slicing each segment with new color, gradient, and texture, while maintaining an overall flatness is akin to watching this work move, zooming in and out—geometric shifts rendering earth that knows it’s connected to, and is, something larger. If Rice makes works that defy the earthly and the analog, John Phillip Davis’s works, influenced primarily by process, are intense excavation sites for the eyes and mind. Davis aims to create “a fertile and exotic surface with which to provide a personal context.” The works exhibited here are from Davis’ body of work, Inferno, and each contains material from earlier works, which results in “provocative surface layers.” Davis says the title of this body of work “speaks to an age of unrest, an age of combustion, collapse and rebirth.” He uses myriad tools to deliver heavy blows to the surface—with velocity, violence, and deep applied pressure. Fire is also used, “to create marks and environments not only as a value, but as an added genuine surface aspect.” Davis’ works present tactility and viscerality. He uses wood stain, acrylic paint, contact cement, polyurethane, clear caulking, recycled canvas remnants, ink, expanding water-reactive adhesive, and more, to tell the story of how the work came to be. 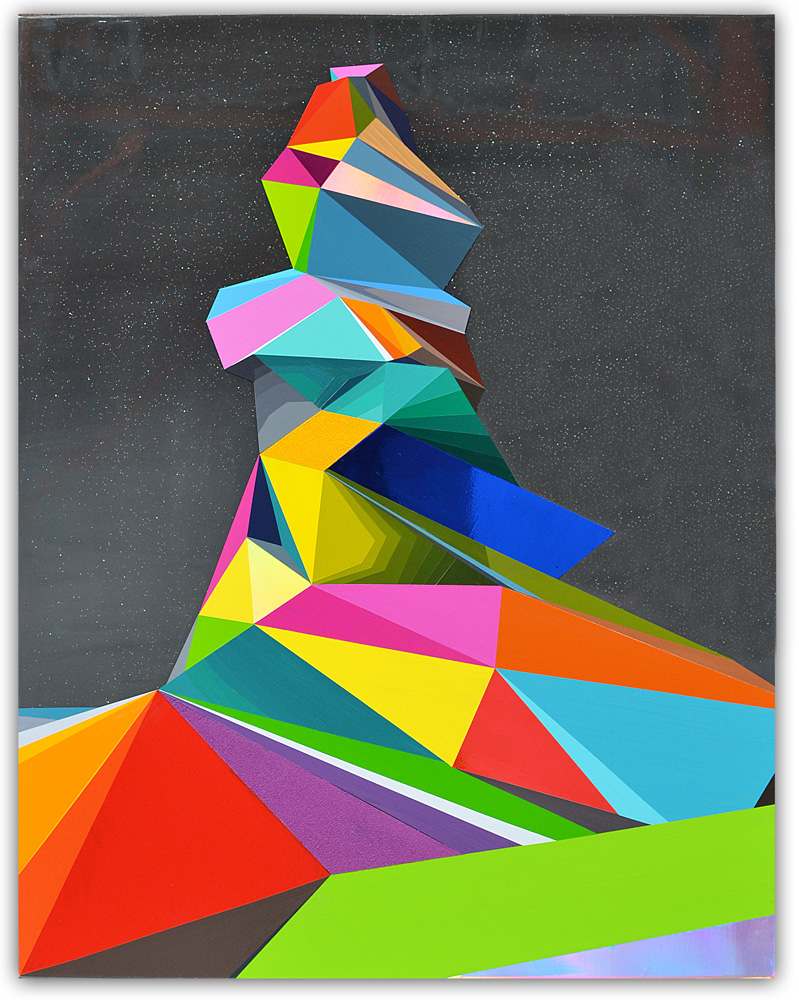 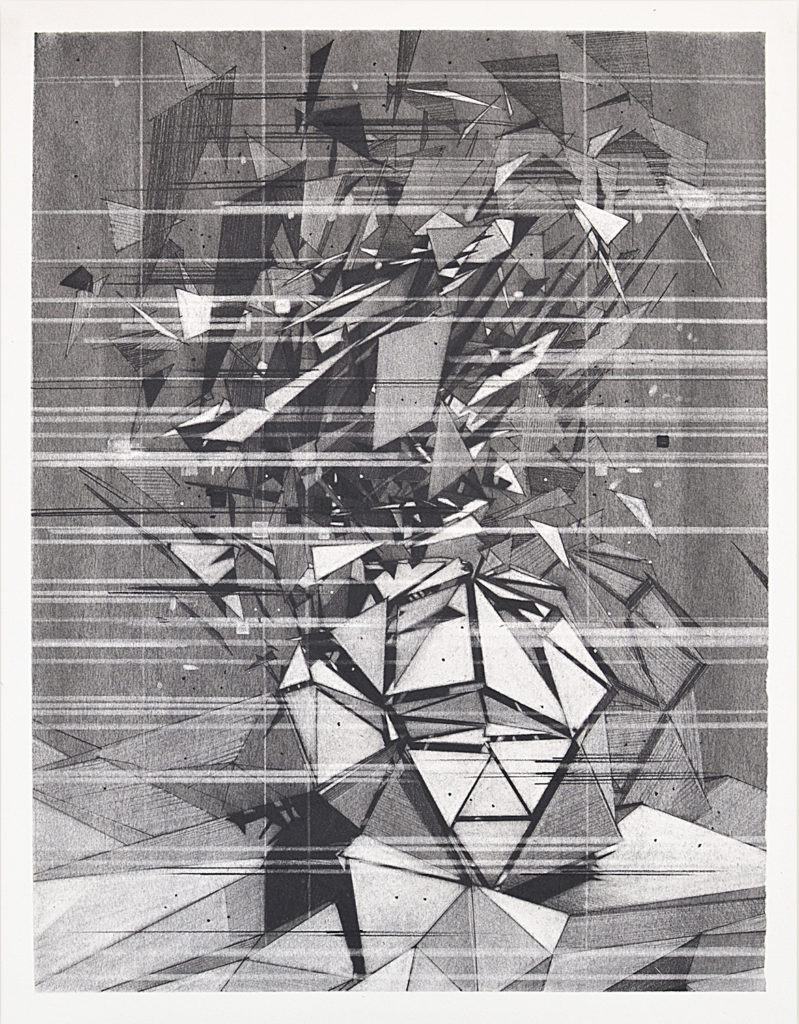 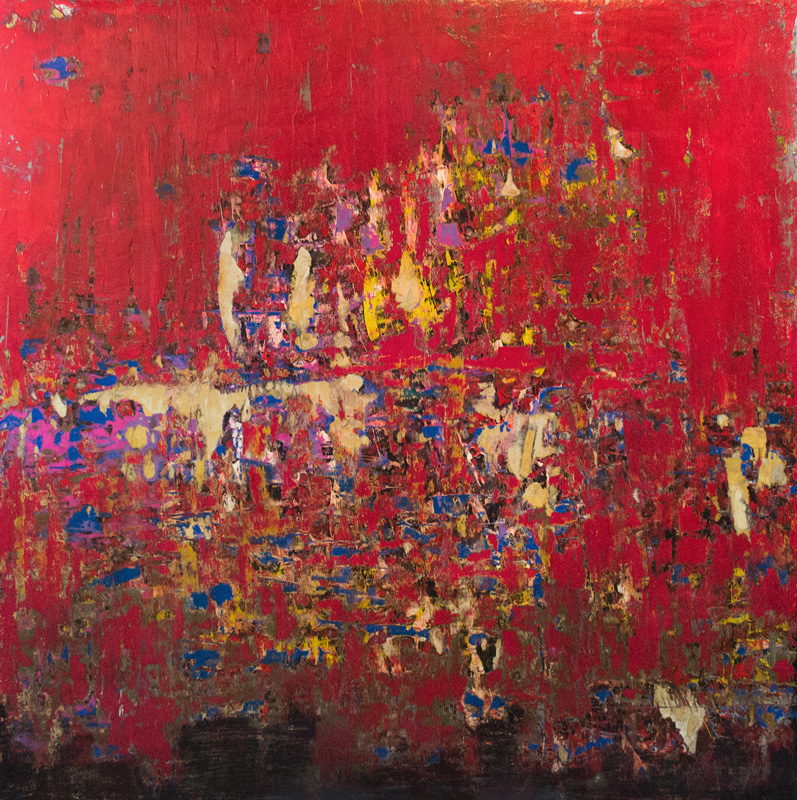 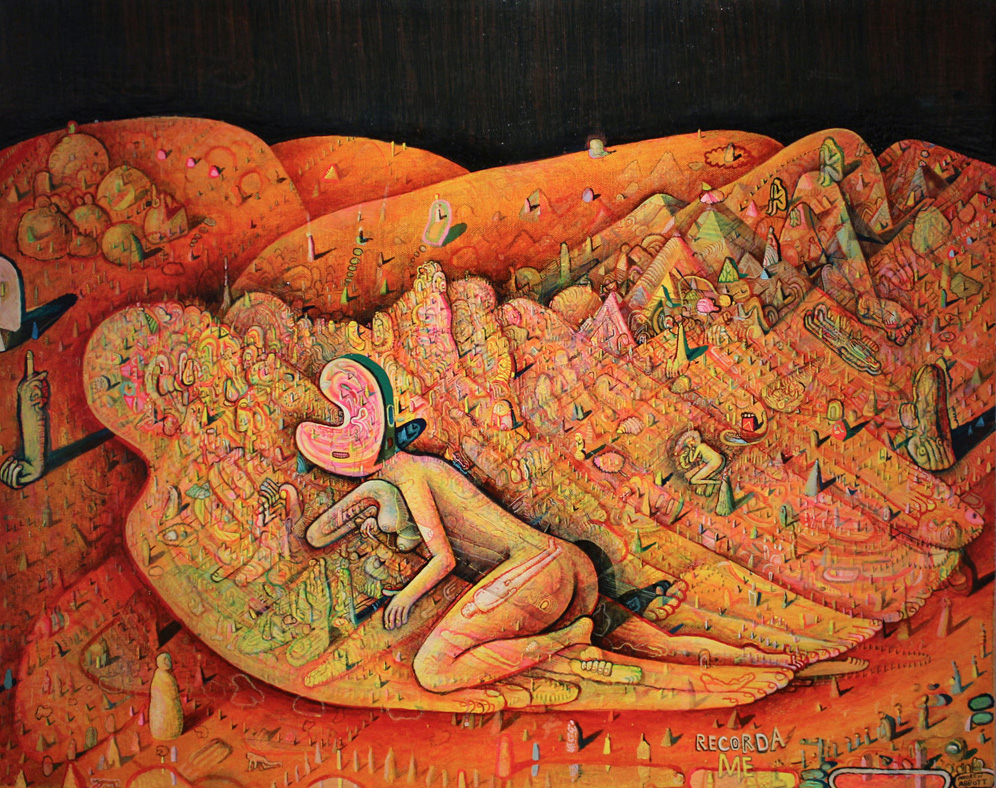 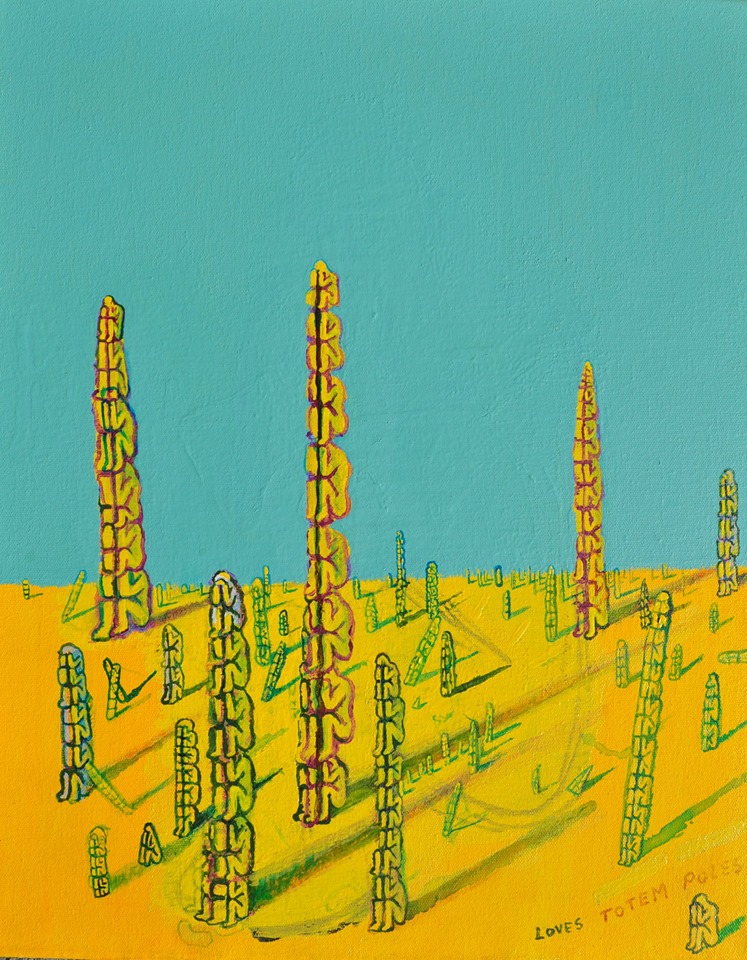 “Villain” is a multi-colored work with a blanketing of deep red, an intense top layer over ocher, indigo and pinks. The attention to build up is equal to the detailed way each application, or striking of the surface, offers a small view of something else.

“Bury Me” evokes erosion and unveiling. The hidden or buried aspect of any object, or even of strata and strain, is what is looked for. In the complex process of Davis’ works, the combined and disappeared become new forms.Here, the browns, yellows, and black become elements by which one wants to find. Davis includes a dimensional object in the lower right quadrant, spine-like—a stabilizing element, a discovery yet to be covered, or in the process of being earthed.

These seven artworks conjure the Beatrician. They speak to the opposite of Dante’s famous quote, and instead, seem to say: Do not abandon hope; Enter here. Senid Tabakovic doesn’t want to be “literate with imagery,” but “wants to show an abstract or surreal setting that is indirect, made of simple elements that eventually mold into a complex overall image.” Tabakovic says, “the circle with other line work is absolutely necessary,” and that he “is interested in how everything is made, to living organisms to man-made things … breaking down everything into shape and color from which he builds something new.”

Though Tabakovic works in acrylic, India ink, gold leaf, spray paint, charcoal and graphite, the work, “God Particle,” stands out for being drawn with black marker and pen only. In physics, the God Particle is the Higgs boson, which supposedly gives matter its mass, and could be a missing piece that modern science has been looking for. This title might speak to how artists often see the very answers that elude those who seek them more directly.  In “God Particle,” Tabakovic draws a solid black platform above which a planet-like sphere exists, creating a boundary, at once distinct and yet transitional, so that the positive/negative aspect of the circles, or atoms, exist in both the two-dimensional plane and the three-dimensional globe. This legion of atoms, in an orgy of covalent bonding, form a magnificent whole, which looks to either be pulling from the planar surface, or dropping molecules to it. The directional sharing is unclear and more pointed for that.

“Medusa” is mesmeric; it makes the viewer want to keep looking. Within a red sun atmosphere, this globe is inclusive of a snake mass, in all its mythology. There is the same hyper-intricate repeating cellular adhesion, creating small bubbles—reminiscent of Yayoi Kusama’s, Infinity Nets—or perhaps in an imaging of what philosopher Peter Sloterdijk writes in his Spheres trilogy, “So The One Orb has imploded—now the foams are alive” (Foams, Semiotext(e) 2016).

Weather these tiny and large roundnesses invite thoughts of moons, suns, planets, or all things cellular, and therefore molecular and atomic, Tabakovic visions awe-inspiring synecdochal ideas about all matter. Andrew Abbott is influenced by the “complex and infinite quality of life.” In his work, he attempts to take an idea and “expand and divide it infinitely in the same painting [… ] studying shadows and how they are affected by objects and light.” Inspired by landscape paintings, Abbott creates his own dense landscapes, many of them figural. These works seem determined in their stories of aloneness, even when populated by many.

His signature huddled figure, which, over the years, has shown up on NYC street corners, and other unexpected places, has evolved from holding a mobile phone to its face, to having no screen with which to interact. Now that his lone figure has his hands to his face, one imagines only darkness is on view. Abbott uses this figure in many works, but nowhere in this show is this unitary identity so great as in “Loves Totem Poles.” Hierarchy creates solitary confinement and in a world of self-worship, there is no descending order that is easily recognizable. What are the unique markers that make each god-self different? The infinite is at play here, the proliferate nature of individuals, alone. And the title brings to mind a profile description of oneself.

“Hot Dream of Watermelon” is a Boschian landscape, with a female being reposed amongst persimmon-colored hills.  Abbot’s women are both welcoming and vulnerable. Here, her head is replaced by a cut-open watermelon, and she is womblike within the landscape, tucked in and perfectly fitted within natural structures. Inside her head is a landscape, though fleshier and pinker, that slightly mimics the land in which she lies. Nothing in this scene is terribly sharp or pointed—not the hills, the rocks, the repeated fetal figures, nor the signature huddled man up on the hill, not looking on. Almost everything has a roundness and softness to it. There are long floating figures inside the central female figure. It’s a fertile and swollen land, her body, as well as that in which the bodies rest.

Abbott works in acrylic, mostly, but his surfaces vary extremely. He uses substrates such as polystyrene foam, printing screens, and other urban detritus found on the streets. He likes to experiment with new surfaces, and to that end, he has created a contemporary Romantic body of work, having noted a new type of sublimity, of beauty and of terror, both linked to the great millennial expanse of connectivity and profiles (from the Italian profilare, which once meant, ‘draw a line”), of shadows cast in infinity.