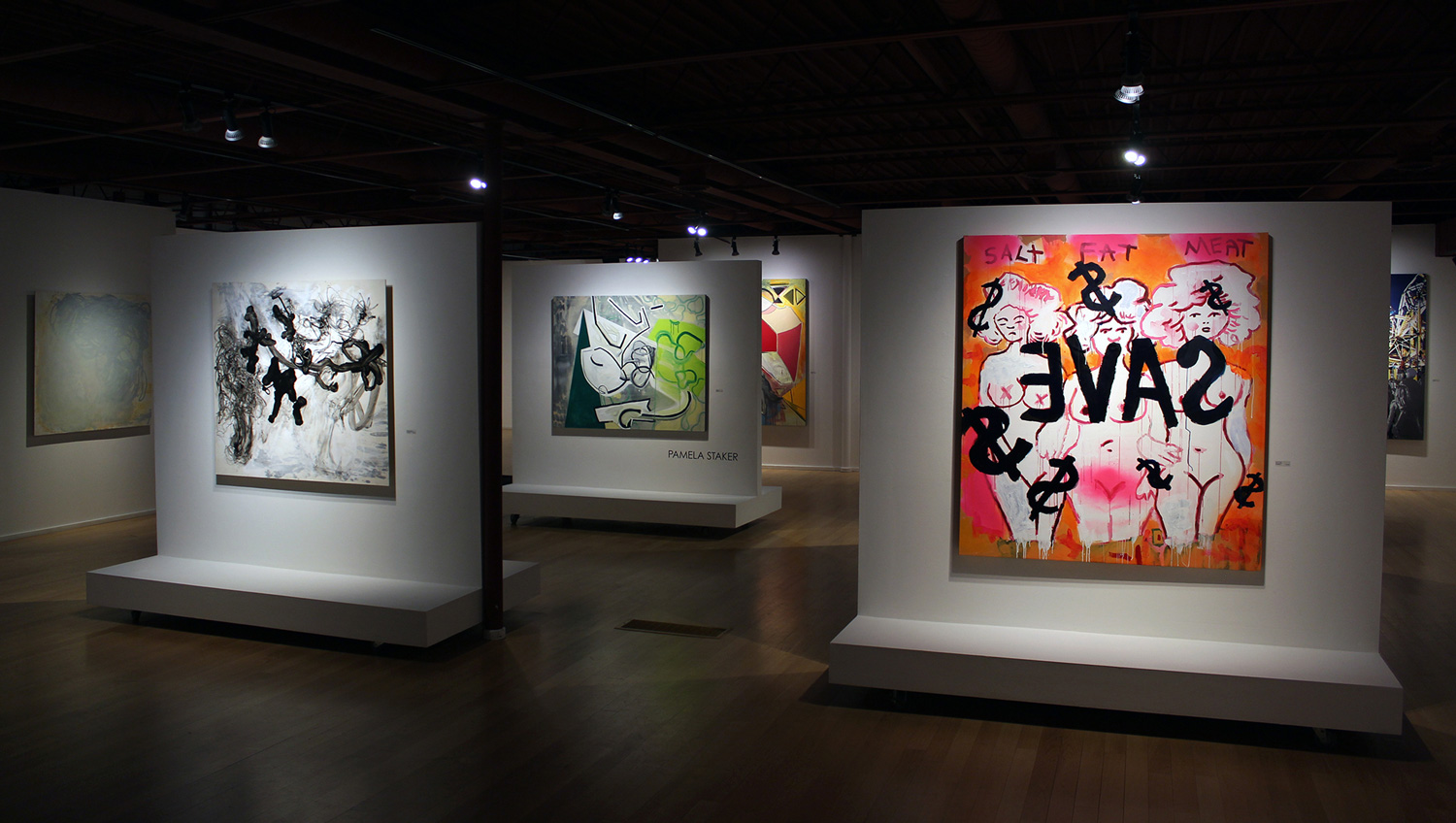 Four Solos, showing through May 28th, is an exhibit of striking lines, potent color, and intense figures. Robert Hoerlein, Rob Stephens, Thomas C. Jackson, and Pamela Staker, represent a vital group of artists currently working in the Midwest, but who have a reach far beyond this particular swath of geography. 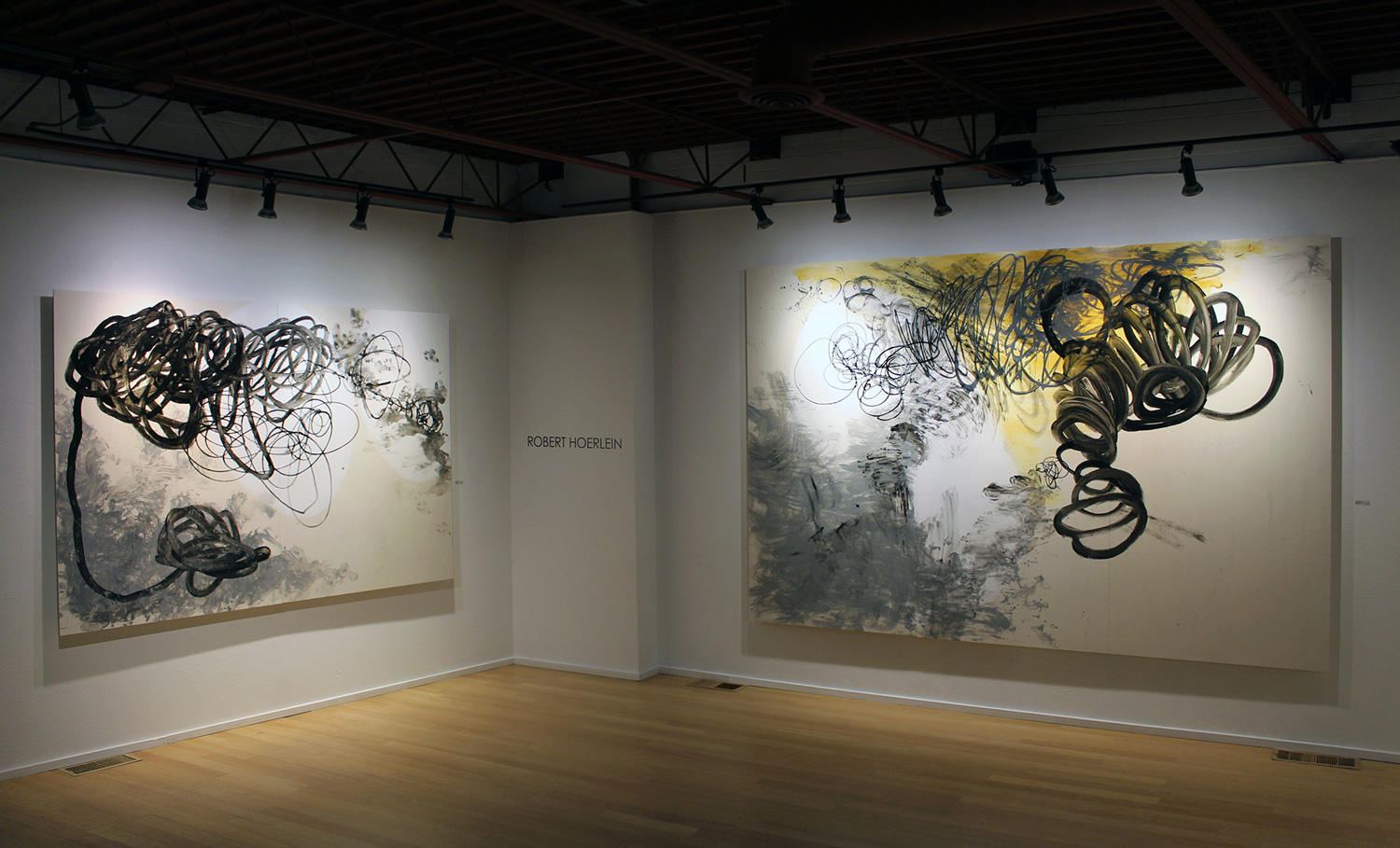 The calligraphic lines of Robert Hoerlein’s oil and acrylic works find much of their power in his use of blacks, greys, and whites, with the spare addition of orange, yellow, and green. Like Cy Twombly, Hoerlein makes use of space in a tightly composed but seemingly hap way. His vortices and line clusters appear to float with no fear of unraveling. “yes but this #13,” for instance, is a smaller work that makes use of lines both thin and thick. Hoerlein places these side by side, while leaving a lower corner of not-quite-blank space, which grants the eye somewhere to go to and from which to leave.

These “yes but this […]” paintings gesturally address the dichotomous nature of ideas, concepts, and world. And even in their equivocality, or because of it, the tornadic strokes here create a calming space. Hoerlein’s works manage the calm before, and the storm, in a masterful simultaneity. 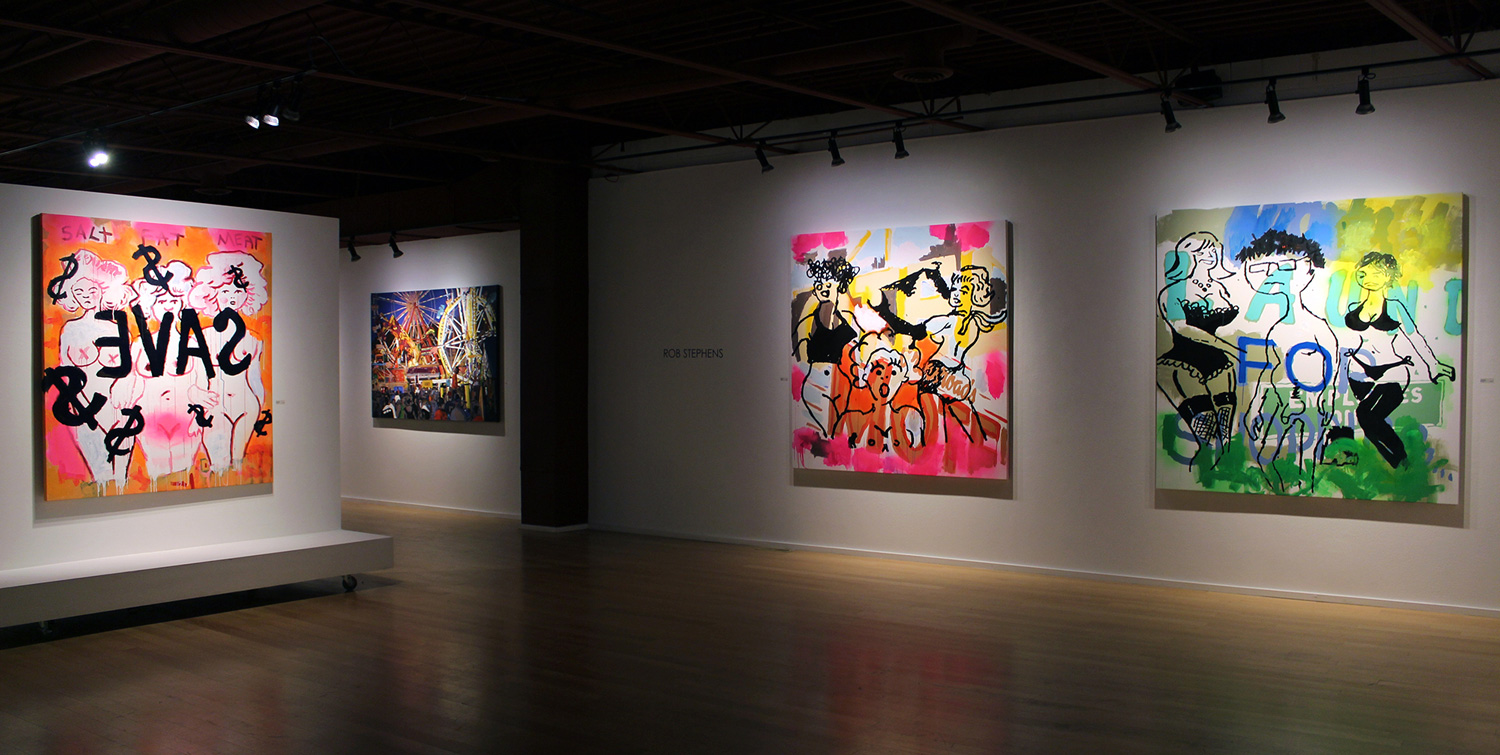 2016 Iowa Arts Council Artist Fellowship recipient Rob Stephens (https://www.youtube.com/watch?v=gY8kt8Optao), shows his large-scale SMUT paintings, which do not intend to be or create calm. The seven new works are bold and hyper. Neon in color, feel, and in the very etymological sense of “new” for Stephens, he has parlayed his fine printmaking skills and comic book drawings into a strong series of “direct” and “exposed” acrylic paintings. “Free Cable,” the first in this series, began its life as a doodle on a post-it note.  This enlargement helps make for the reaction it may engender, for Stephens recognizes the potential to dismiss the diminutive. These brightly hued works, with exaggerated figures—nude and otherwise—are further emboldened by the thick black “craggy” lines that make these figures, lines which Stephen’s says harken back to his woodcutting days. “Salt- Fat- Meat” references the Three Graces of art/history. The list is long of those who have depicted this trio: Botticelli, Raphael, Rubens, Cranach the Elder—but Stephens’ Graces fall somewhere between John Currin and Niki de Saint Phalle—they are animated though still unsmiling. They are questioning (or to be questioned), and Stephens spashes over them words and signs in a semiotic mash up of the commodity of the female body and what the dynamics of power are within this triad.

“Try It!” brings in local references via commercial signage (think: Mikey, from the nostalgic 1970s Life cereal commercial). Long time Des Moines residents will recognize the Colonial Good Bread sign from the old factory on 2nd Ave. and the Beaverdale institution, Snookies Malt Shop, but the works in the back hallway are also not to be missed. “Nada Is Impossible” and “Almost Free” are almost completely color-filled canvases, and they are literally complementary, the former composed of red, orange, yellow, and pink; the latter of green and blue. But combined, these two large works do not erase each other—they enhance the landscape of Des Moines Life, here represented through signs and logos (branding and the word), capturing local haunts and shops such as Big Tomato, ZZZ records, and Aqualand. 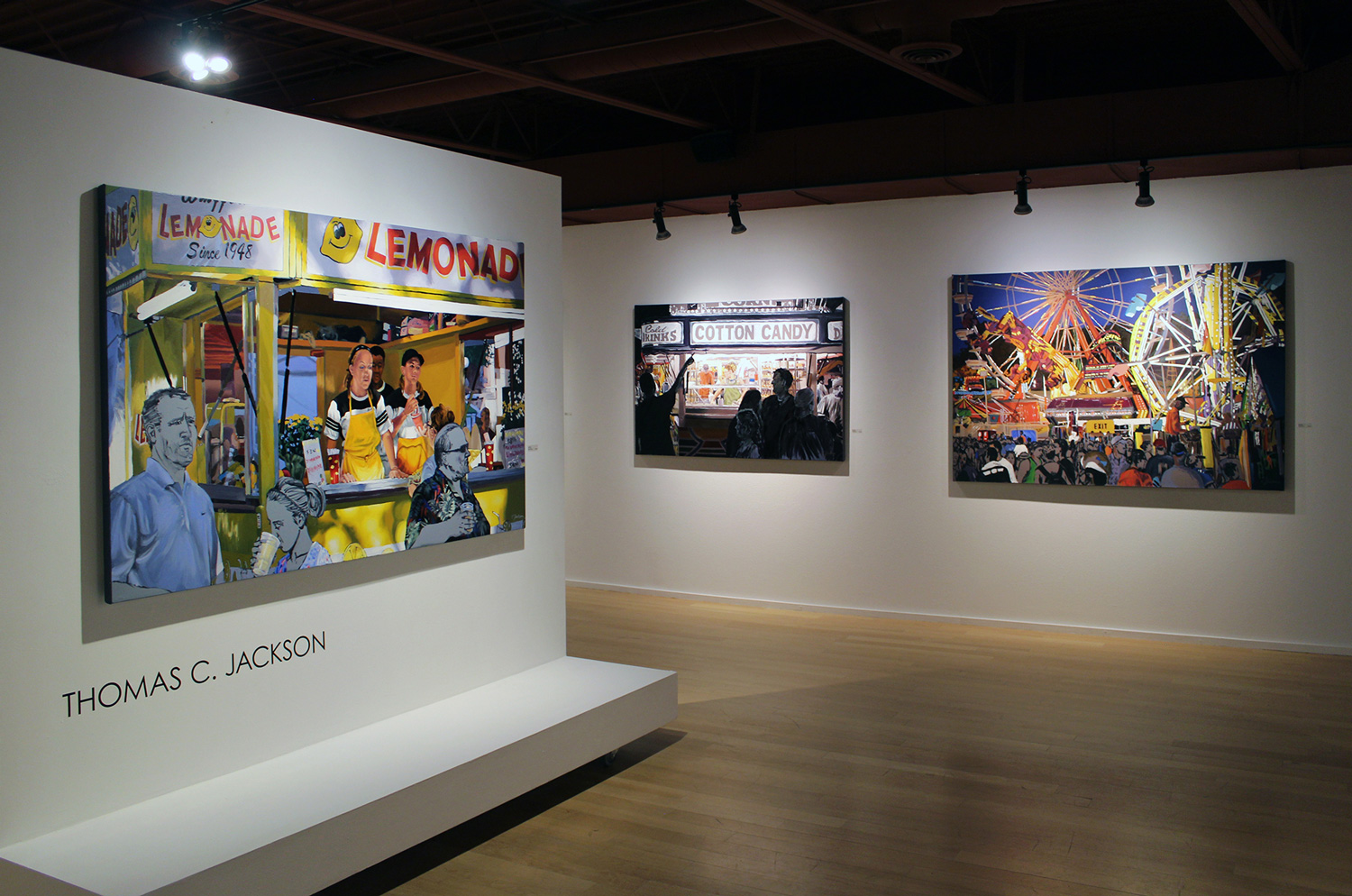 The diverse works of Thomas C. Jackson are shown here together: oil paintings, photographs, and paper collage works. The five paintings capture the Iowa State Fair through intensely different treatments of fore- and background. Though figures populate these fair scenes, the emphasis on food vendors and carneys is different than that of the fairgoers, as if those who offer the experience are more fixed and already filled in than those who are there to receive the experience, to be transfixed and ready to be filled by the whole event. The rides, prizes, and exit signs get top billing in these engaging works that mostly appear as night shots of the crowds and the lights, in renderings so colorful one can imagine them as large scale spin art suddenly stopped, configured, and focused into Midwest tableaux.

On exhibit here are also three works from Jackson’s photo series, “American Cipher,” where he juxtaposes both related and unrelated images to create a dialogue between them, and with the viewer as well. In a most refined and more complex way of playing pictorial versions of rebus word puzzles, Jackson’s photos make us attempt connections, but they also suggest that sense is not always the most important thing to make. The spliced images are symmetrical, as are the compositions within each frame, but the subjects are so distinct—cross section of a peach paired with dried, darkened red roses, for instance—that there is no simple story. What is left is a celebration of formal technique and an embracing of fragments in their combinatorial wholeness. 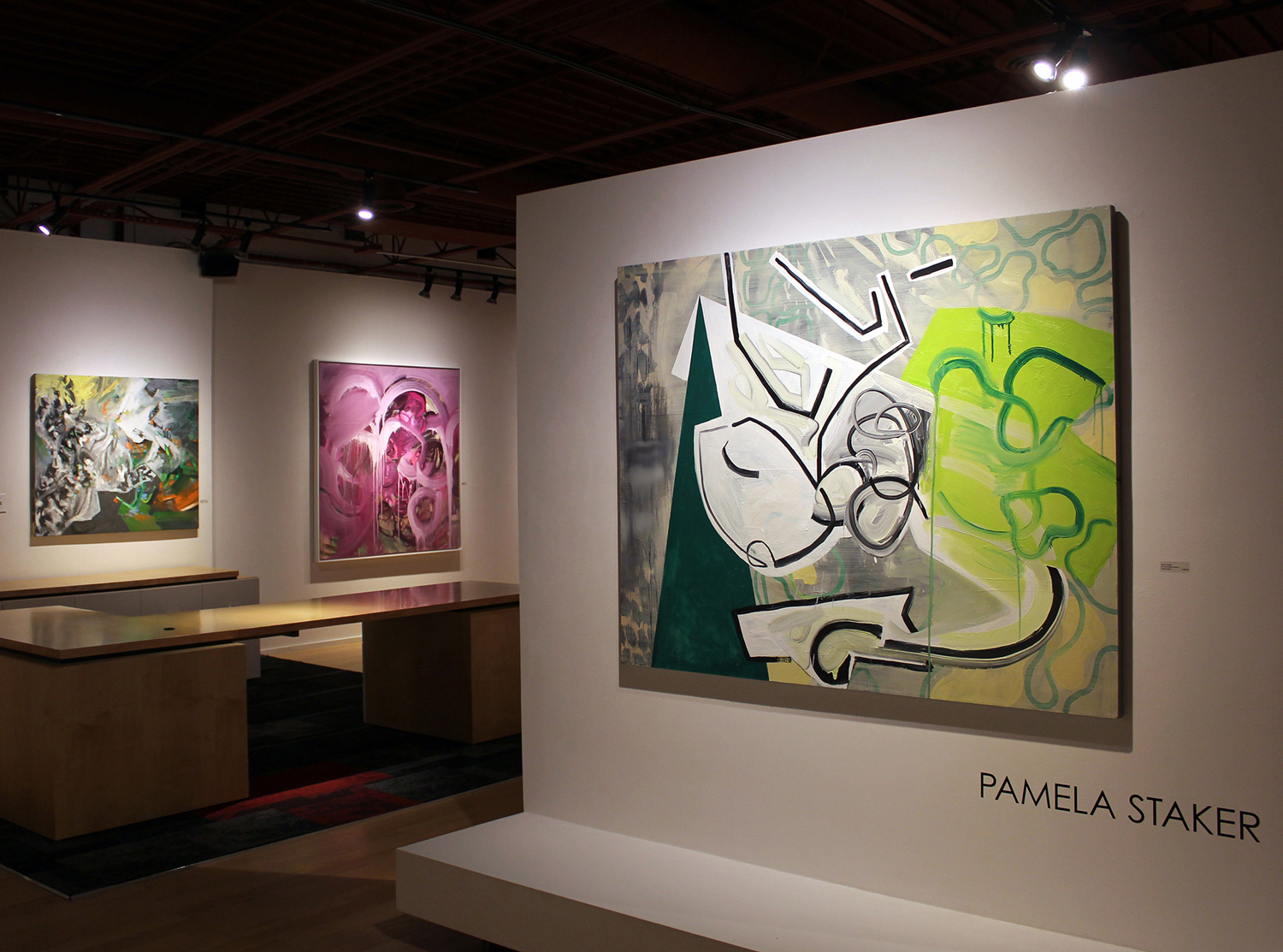 Chicago-based artist Pamela Staker first creates three-dimensional works before painting and collaging her studies of line and color. Though she notes that these do not get literally translated onto the canvas, there are hints of objects and structures amidst her swirling fields. Staker’s abstract landscapes confuse the urban/rural duality. Take “Magical Forest (urban construction)”: the mixing of magentas and whites culminate in drips, and a gorgeous, almost-lavender wash over the large canvas. And “The Cabin” suggests both a frontal and an aerial view, as if Google Earth were an artist’s abstract view onto a searched-for cabin, here, possibly, a dotted piece collaged into the painting. This yellow, gray and black work suggests the natural world overlaid (-run?) with concrete supplements, and a tree (or is it roads) that appear to become part of both layers. Staker’s play with planar dimensions and multi-perspectival approaches results in geometric emersions and organic immersions that cavort, giving the viewer a palette of light angles and angles of light tempered with the roundness of her loose brush strokes, which places something slightly darker below, beside, and between.