It’s always good to prepare for springtime with color and exuberance, thinking of newness, the hunt for youthful intuition. Chris Vance always provides this, and much more. His new work, on exhibit through April 14, is full. Full with line, edge and tangle, layer and depth. Full of musical reference & tone.

Vance’s paper, paint, and graphite swirl as if applied in balletic wind. They make spaces between things, insinuate curvature and intervene with black and white to outline where bold palettes of color strike near-perfect pitch. Materiality is at the fore in his new works on paper, many of them, such as “Nobody’s Fool” and “Spin Doctor,” layered and cut to create a deep space into which you can see.

Vance’s drawing, “Revolver,” is quieter, subtler in its chosen medium. At the center is a contour drawing of a male head, but even with its softer presence, the compositional fullness gets into the eye, so the mind wants all of it, can’t stop scanning for more faces, eyes, mouth and teeth, wondering: where does that line go, and that one, and this? Reminiscent of the Beatles album cover by the same name, the figures crowd the space, but here, are Vance’s very own.

Larger panel works, such as “Pheasant Run, ” “Vital,” “You May Be Right, I May Be Crazy,” and “Incoming Portal,” often allow media and wood grain to blend, turning swirls into motion across the planes—edge to edge, intimating a before and after of what Vance depicts, or hunts for, in his work. This inferred continuum reminds us that what is captured may be merely a section of a larger imagined scape. The holes in “Incoming Portal” grant clear entry and passage, literal through lines, as if Vance is microscoping these strokes for us, showing the juncture and puncture points that are not discerned in other works.

Vance’s collaborative work—with fellow paint pusher Andrew Clarridge (“Jump to Space”) and Robb Romero (“Go Ahead if You Got One”), the latter, with whom he also collaborated on the University Library Cafe mural in the Drake Neighborhood—offer amazing stylistic interlayered elements of each respective artist. With Clarridge, the interstellar context offers the best of organics and geometrics. Romero and Vance mash up shapes in a sort of aquarium-like framing, with figure eights and eye-shaped objects, that before our eyes, begin to morph into water drop, bubble, wave.

“American Gothic 1 & 2,” Vance’s older three-dimensional works, depict Grant Wood’s iconic two subjects, separately, as a contemporized work that appears folkloric. The figures appear totemic in their reminder of Iowa’s own art historical canon, in which Vance is placed. This Midwest regional influence, along with the influences of West Coast skate culture, pop culture, and music history, together gives a loose frame for all that Vance does and incorporates into his art.

“Future” offers a darker rendering, where what may have been matrical has gone a bit catawampus; lines extrapolate, constructing pyramidal elements that accrete, but also extend out beyond their created object to offer a tethering—or is it the ultimate indicator of infinitude and untethering? A polygonal cluster holds firmly at center, its frames and windows suggesting a metaphorical planetary close up.

“The Look In,” a mixed-media work in mostly black and white, on the other hand, offers what appears to be a plan view, or even maybe an elevation, of a cluster of lines. Like an architectural drawing creating an angled and perspectival rabbit hole, this work mesmerizes in its overlay.

Overall, Vance’s new body of work glows a copper-tone glow. It does many new things, but his larger oeuvre through line is still legible, as if his signature characters meet Picabian geometries. These works make a lovely case for mathematics with a gentle and humorous human bent.

In Kenneth Hall’s “Wading,” legs and hands are illuminated moments—thick paint- knife strokes pull and push this image into a delightful scene, morbid body as hide and seek. This single figure, alone in algae-green water, measures, by legs, small fathoms. And where the skirt hikes to expose flesh and dip it, the hands hold tightly to a smile the cloth makes, though the subject’s actual face, along with the upper body, is obscured by a dark blue low-hanging cloud of oil paint.

Hall’s “Covert Operation” is a color-blocked still life, abstracted and set in a magenta round—conjuring a Francis Bacon painting without the disfigured human subject at the fore. The paneling and alternating shades of pink in the backdrop, as well as the deep burgundy heart of this work, present vertical elements in a horizontal range, directing the viewer to scan back and forth, while pausing on the dark pole which attempts to divide the composition, and also allow the lower frontal brush strokes to hold the eye up, continuously returning to and resting on the divan-like central shape.

The same perpendicular positioning is at work in Hall’s “Gleaning Meaning.” The main orange color here, like a close up of a burning sun, or the smooth skin of a nectarine, make floor and wall for the painting’s scene—is it depicting interior or exterior? One reads the pink and lavender lines almost as string, looping and dangling around a more natural formation, perhaps, in brown. And then just as suddenly as one believes they are in the natural world, the eye discovers what appears to be writing—of the letters “E” and “V”—does it say “EVE” or “EVEN” or “EVER”? And the realization that be it image or word, one is constantly translating, deciding to read the world, closely or not, in search of answers, of meaning.

Gary Kelley’s pastels in blues and blacks tell stories—the histories of certain icons—depicted in singular and epitomic works specific to each subject. “Tangled up in Blue,” of Bob Dylan, and the eight others on display—including portraits of artist Frida Kahlo, actress and singer Marlene Dietrich, and music legends Elvis Presley and Miles Davis—place these historical figures in scenes that capture their essence—or rather, the essence of their works or personae, as the public has come to know them. “Seeing Blue (triptych),” melds time periods with the sartorial choices of their subjects, two in each panel, all placed in a museum setting. All but one are looking out at the viewer, as if studying works on a wall, reversing the gaze. This investigation of the mediated world is enhanced by the sixth subject’s positioning, as she looks down at a different medium/media, the mobile phone in her hand. 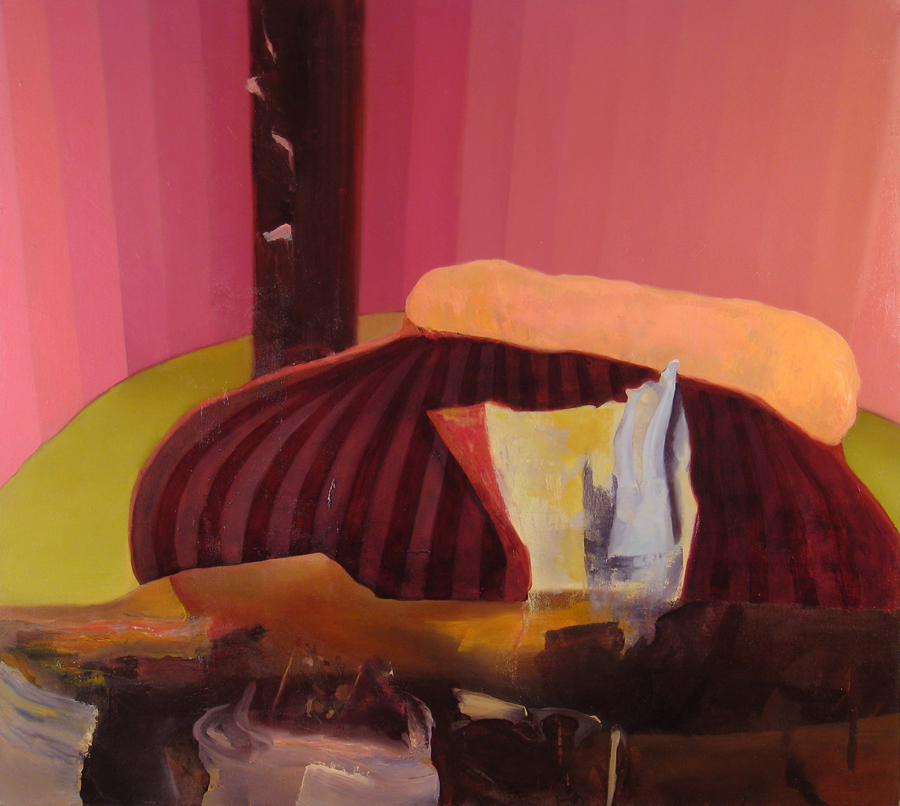 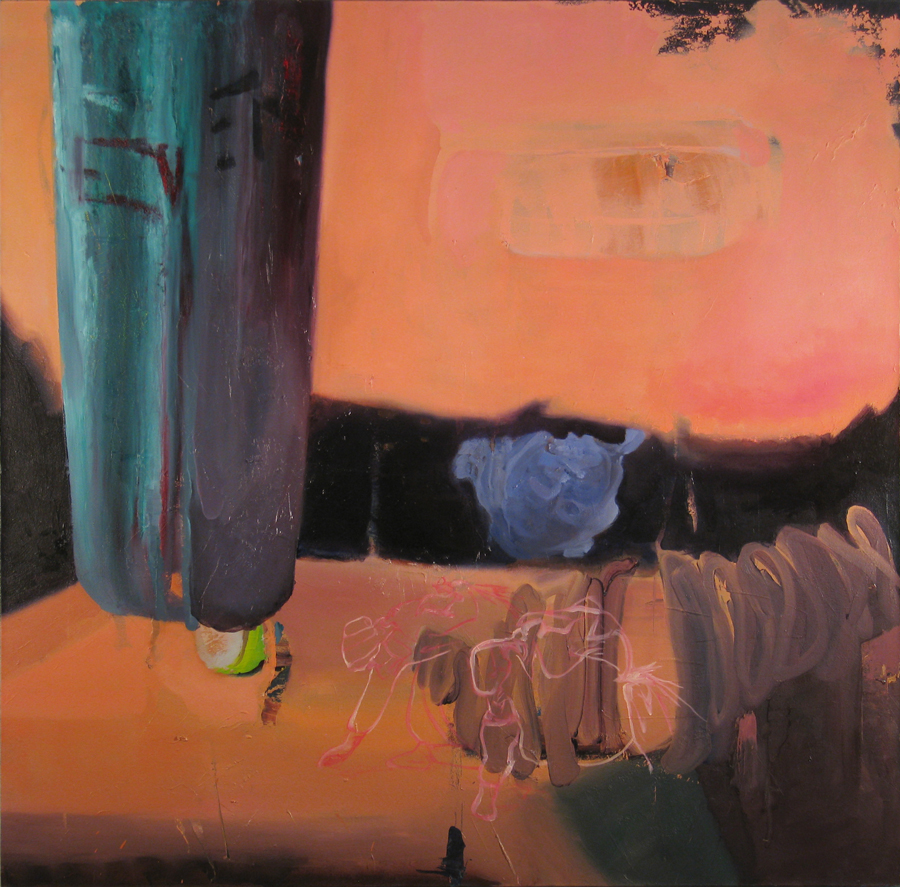 Lucas Underwood’s portraits are beautiful collaged layering of maps and textual and imagistic newspaper clippings, built up into depictions of figure and flower, bush and apparel. The situated man, or men—in “Rob – 152 (In Blue),” “The Boxers,” and “He Was Not Strong Enough”— are composed of land, water, road, dots, towns on paper—topos turned inhabitant. The almost-obsessive lines over maps contour and create shadows that make intricate hair, petals, leaves, flesh and silhouette.

TJ Moberg’s “Wheat Field,” of latex and resin, is itself a topographical map—a field at the edge of buildings at the edge of deep dark water. The shine of the resin makes reflective puddles within the molded landscape. It’s inviting—one wants to take her hand across it—to feel the ridges of paint, a braille neighborhood, a blind and deserted lot—an imagined touch, locating place. This three-dimensional painting conjures an old, and therefore new again, system of positioning on the globe.

Duo Aaron Wilson & Tim Dooley, with monoprints, “Stuttered Gestures 3” and “Broken Gesture 1-5” make exciting psychedelic works, the gestural equivalents of [creating & containing] chaos by using alternating strokes and daubs. These ink on panel works, some made up of printed planks, are surprisingly reminiscent of the horizontal patterns on analog televisions in black and white, melded with the colorful scrolling lines of digital devices. Static transmissions—disruptions—captured in the weaving of images, cut, pasted, and repartitioned.

This exhibit is a fan letter to the past, while acknowledging the necessary forces of future, which is, in fact, what spring is all about. As emergent as flowers and quenching as rain showers, these works elevate our space and hydrate us, lest we get parched from daily routine and lack of looking at and into the world without new views and a higher resolution.