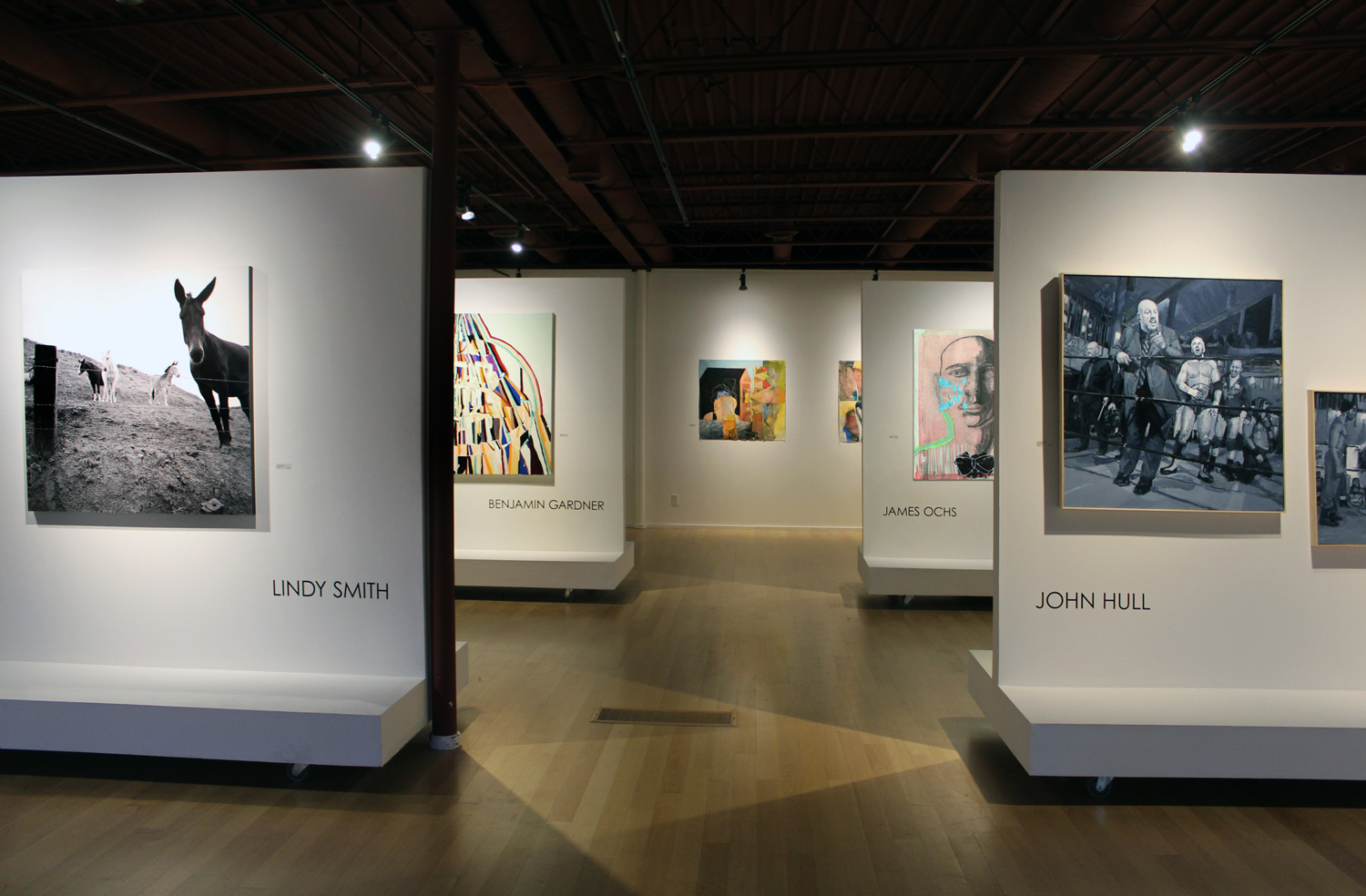 John Hull was a sports reporter for a brief time, but he wanted to be a fiction writer, and then his undergrad time at Yale University led him to find painting. Despite his medium, however, his message is still narrative, and his stories are told through series of paintings, not necessarily within a single frame. In Four Solos 2, his latest story/board can be found on the east and south walls of the gallery. Hull’s new paintings are black and white acrylic works on canvas, of one main wrestler (Hull’s son). Though his subject matter here is new, he continues to “stage events,” this time of staged events. The highlights in the works are so bright they successfully create the heat and spotlights, even halation that the environment of wrestling entails. “Know Your Role” contains three figures on the matt, two in light, one in shadow, and one standing on the other side of the ring, also in shadow, opposite you, the viewer. This piece is about the two men in the light, however: victor—the crown of his head illuminated—positioned above the other, whose chest glistens as he lay on his back in defeat. 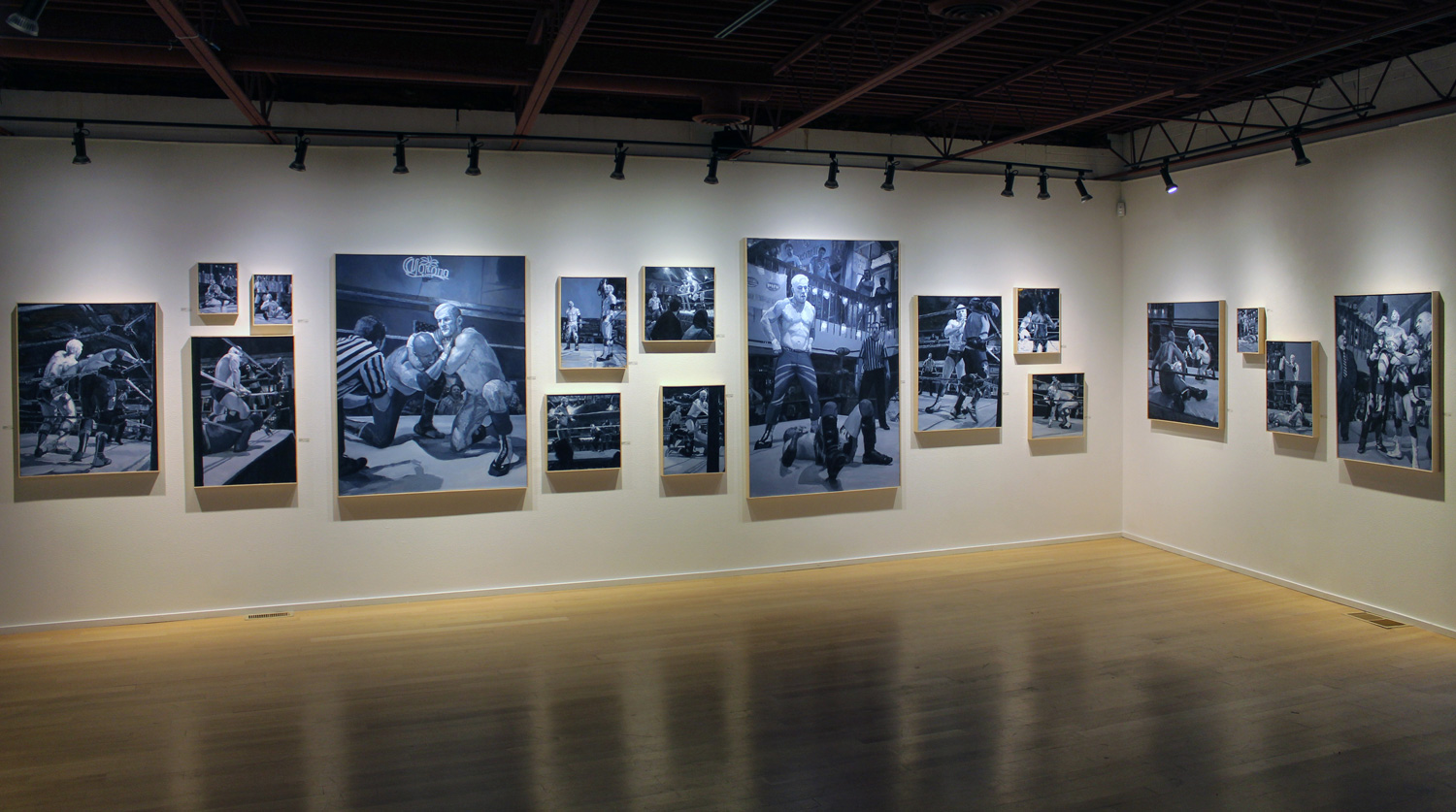 This series deviates from Hull’s earlier works in color and subject matter (see the single painting, “Conversation,” in this show); earlier works were mostly exterior scenes of land and people. These new works range in size from quite small to large, and are of the world inside the wrestling arena, even inside the ring. We as viewers of the paintings also become viewers of the sport, always outside, yet an integral part of the spectacle in its entirety. Though her book is about mixed martial arts, this series is reminiscent of Kerry Howley’s Thrown (Sarabande Books, 2014). The connection is the lack of irony, and the serious observation of and genuine interest in men training and competing—the emotional, spiritual, and psychological underpinnings to these stories of the body. The Heideggerian idea of being “thrown” into the world can then be applied when world is, figuratively and literally, the wrestling ring, as well. Each match or moment from a match becomes another scene in the long narrative of/about being.

Hull is still working with American genres, his former subjects being soldiers, football, baseball, and rodeos, to name a few; the smaller canvases here are titled “American Trash #1-5.” But an overarching theme is the men engaged in these pastimes, and though Hull once said in an interview, “My painting is really about men standing around in uniforms,” with these new paintings, the men are in uniform and action, or are at least acting.

Lindy Smith’s works, from her 2000 book, Straight West: Portraits and Scenes from American Ranch Life (The Lyons Press), are “glimpses of a fast-receding truth,” as Robert Redford said. They are also, however, calm moments of stronghold on certain truths and culture. Smith, who grew up in small-town Western Iowa, started with a Brownie camera given to her by her father. She became interested in ranching culture when she attended a horsemanship clinic in Wyoming after she graduated Bennington College in Vermont. 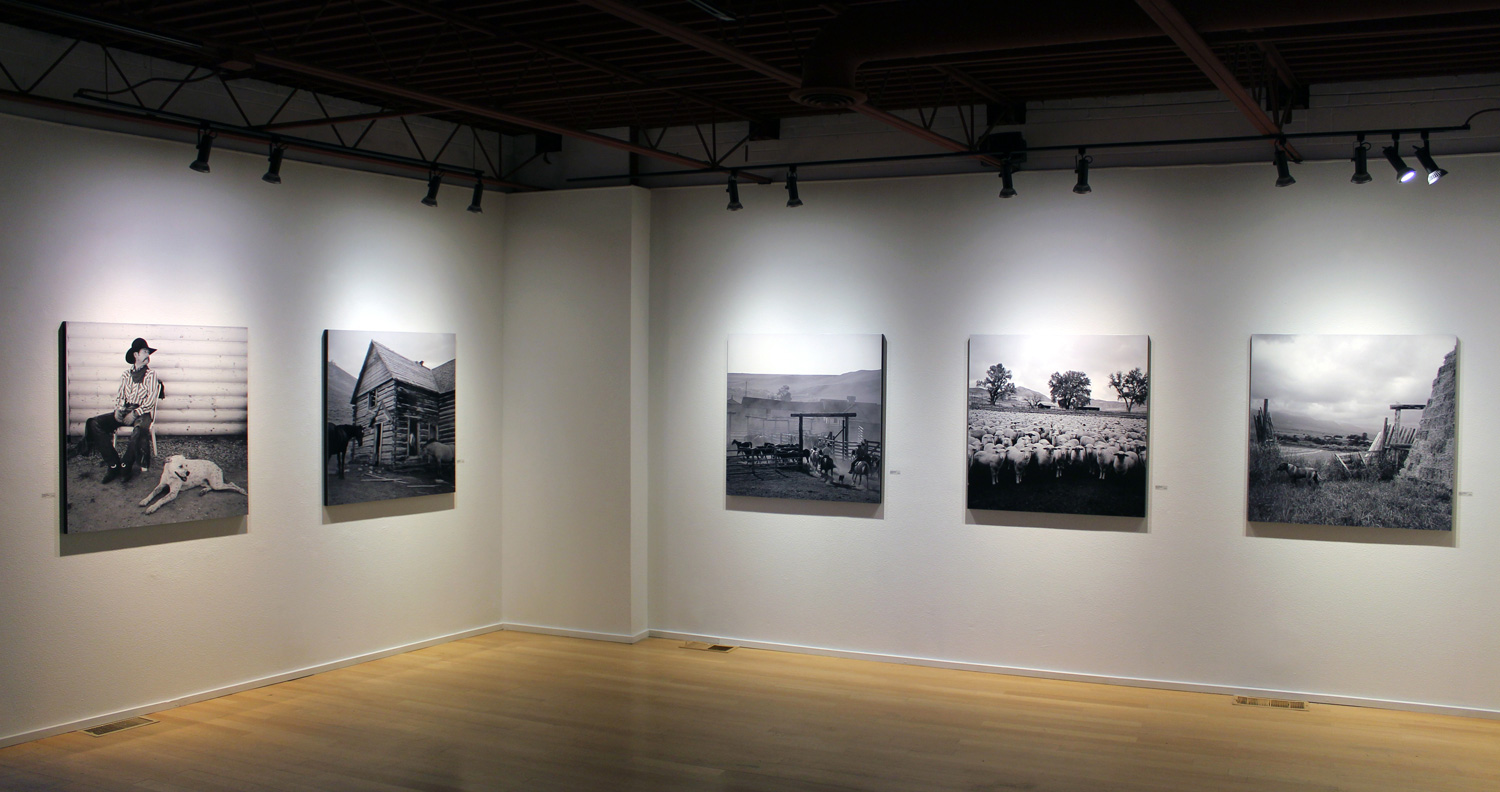 These eight large black and white square dye-sub prints on aluminum act as clear windows out of the Midwest gallery space and into the exterior space of the West, including parts of Montana, Arizona, and Wyoming. These are scapes, where the land to human/animal relation is at the fore. These photos take literal stock of the live, and in the process, engender a desire for spacious open land and sky, and the attendant room it affords one to both manually and mentally work and rest. These large works are calming antidotes to urban claustrophobia. For often urbanity can hug us like Temple Grandin’s “squeeze machine,” but as often, can trigger us to run for the hills, as they say, away from the flood of speed, velocity, and verticality.

Smith frequently uses the horizon as bifurcation line. An exception is in “Dave and Yodi (MT),” a composition of man, man’s best friend, ground and exterior cabin wall. The wall, in its almost-white wood, meets the dark earth floor, thus creating this same horizon. The subjects cut through both segments of the frame. The stillest of these photos is “Bee Hives (NY),” where the hive structures themselves scrape the rural sky. It is the only one of these aluminum works on display that does not have any visible human, animal, or insect, though the towers, themselves, and the barbed wire fencing imply their residency.

Smith’s photographic prints on paper are smaller, and offer a commanding whisper of the American directive to “go West.” In Smith’s amazing photographic capture of the life and style of the cowboy and the rancher/ranch hand, these seemingly vestigial images get herded back into our present and future tenses.

The ontological includes lines, colors, and faces (be it the literal face of the head or in Levinasian terms of locating and recognizing the other). Benjamin Gardner’s art making is the physical practice of the philosophical study of being. His two-dimensional works of acrylic and Flashe (a specific brand of vinyl paint) on canvas, as well as his three-dimensional works made of wood and found material, induce a feeling of exuberant xenophilia. Whether it is the vibrancy of the strokes, despite the use of the matte Flashe, or the way minimal edges are maintained as backgrounding, the visual elements that emerge—visage, star, spire, eye, or lines in repetition as both sameness and difference—succeed in the accretive act of architectonics. 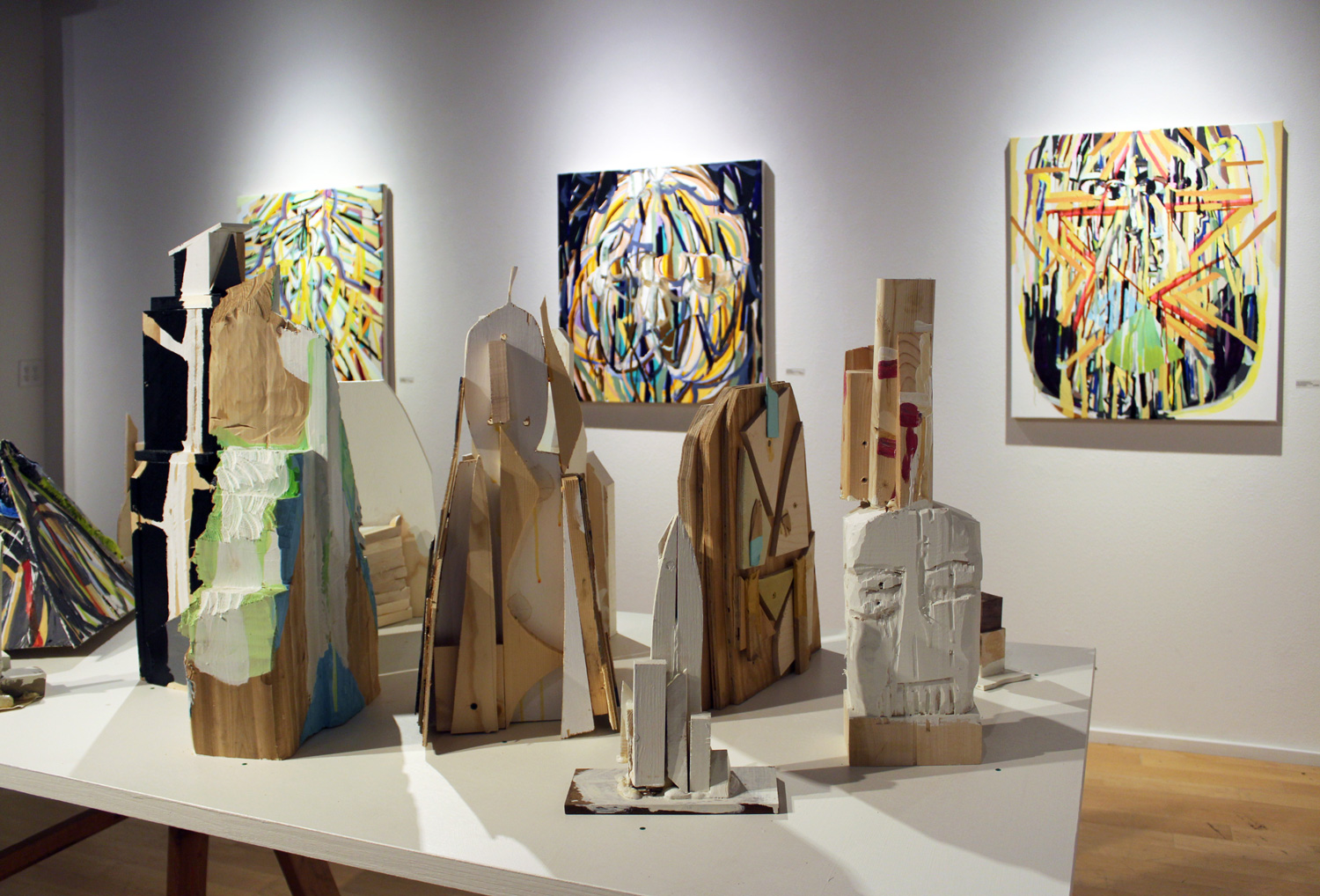 In his three-dimensional works here on exhibit, “leylinetranslations #1-#12,” Gardner investigates the topographical features through his own manmade structures sited together on a planar surface. The structures are of different textures, size, shape, and a few even appear as if they are ready to set sail or land in Egypt, or Scandinavia, or a new spatiotemporal plane.

The painting “dirge for those who died with their hands up” appears happy in its stick gathering and moments of yellow, but is somber in its pyre-like stacking. Gardner’s paintings are visual puzzles that pull you in, make you want to keep looking, searching, finding. His titles are an essential part of experiencing his works, where viewing and thinking, together, become even more complex, more mapped-out in mind—to stand in front of and zero in on what is underneath the easily visible brushstrokes, what is buried, what has been sacrificed or surrendered. Gardner sees his “visual work as a literal vestige of systems that will be replaced.” The radical refuse (n. and v.) and the consequent uprising in Gardner’s work is heavily layered, while the work still maintains and evokes the kind of hopeful sparks that come with any structural, cultural, or philosophical rebuilding. 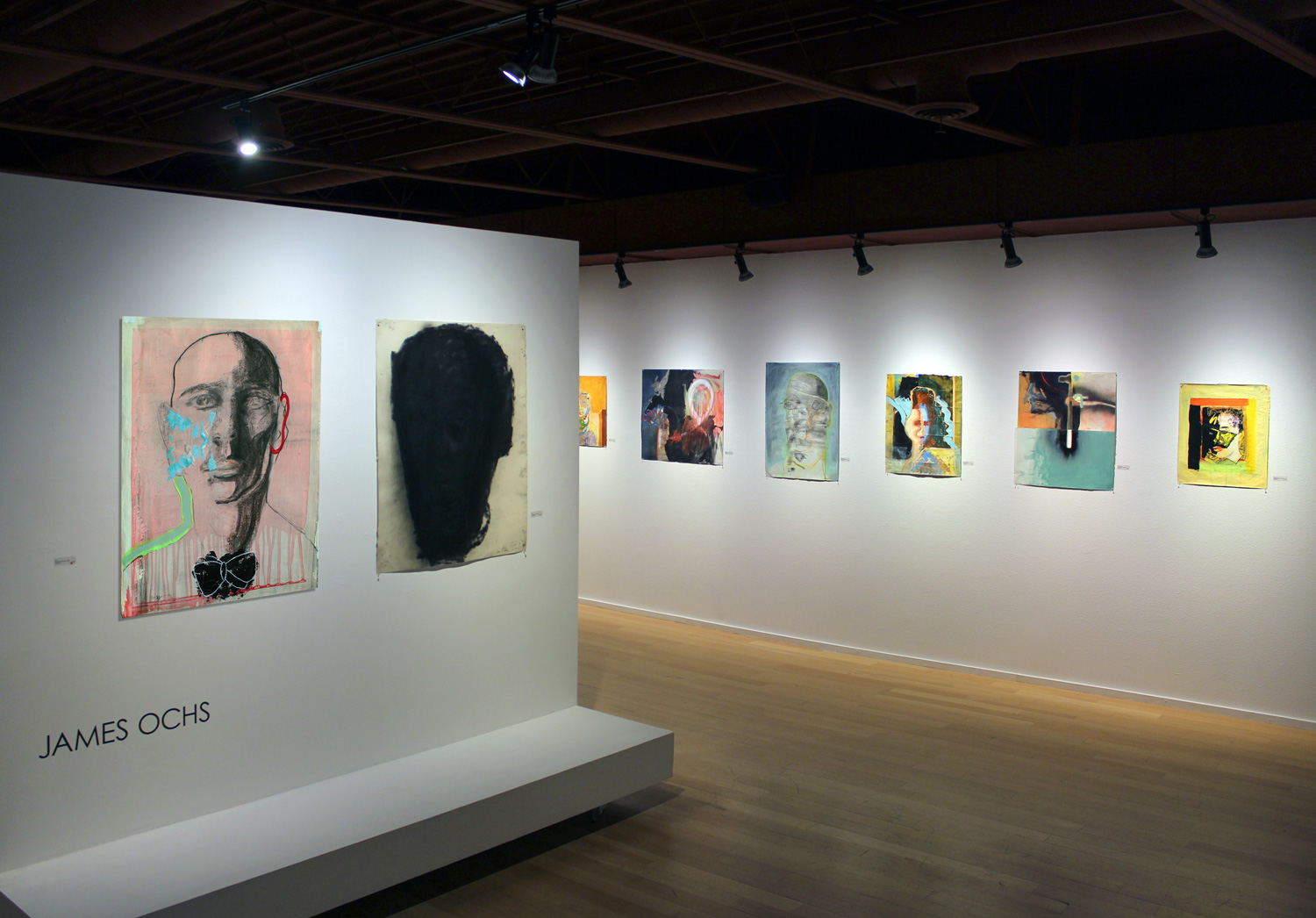 James Ochs’ abstract portraits, monotypes with mixed media, are reminiscent of the watercolors of Francesco Clemente joined with the intaglios of Mauricio Lasansky. His two large works on the middle wall, titled “Now” and “Self,” play a serious game of hide and seek: “Now” is made visible in its strong outline and frontal portrait in half light/half shadow, expressing the oft-opposition of placement, light, and sight; “Self” is made aggressive and vulnerable through its blacked-out visage. The blacked-out visage, however, is still discernable, in the way that a figure can be made out with night visibility.  Though Ochs’ works are rooted in their media hybridity and cultural and mythological figures and stereo/archetypal matter, they are playful, emotive, and evocative.  “Secret and Alone” hangs next to “Medusa.” The former is a face in profile, almost entirely covered by a mask of black. The latter, the Gorgon herself, wears a green snake that almost forms infinity around her neck; her visage is not so dreadful, and appears as if wrapped in sun. These two works, side by side, beg the question: which is more of a threat: secret and alone, or to look at a female creature? Ochs’ appears to understand when something is at stake. These monotypes turn temptation and risk into beautiful surrender, and remind us of what Julia Kristeva said regarding Medusa: “Far from prohibited, the activity of seeing must be, in short, restored, but as process, an ongoing path, so that looking becomes training for freedom.”